Home » Et cetera » Newsletters » An Air of Bustle and Festivity

Well, it appears to be Christmas again – our eleventh, would you believe? The 48th issue of Slightly Foxed was sent out to subscribers and bookshops on 1 December and we hope by now it’s being read and enjoyed all around the world. We do think the new issue, with its intricate pen-and-ink drawing of a river in winter by Sarah Woolfenden, is especially stylish and the content is especially good too – we hope you’ll agree!

The days since the issue was published have flown by in a flurry of ribbon, brown paper, gift cards and ink as Anna, Jennie, Katy and Olivia (with help from incumbent elf Hattie) have worked like dervishes to get everything packed up and posted out for Christmas. But despite the long hours, paper-cuts and writers’ bumps on our fingers, December is a very happy time for our little family here at SF: Carols from King’s are playing; the office tree is in place – topped with a charming fox sent (à la Miss Hanff) by Airmail from a reader in New York; the windowsills are crammed with cards from subscribers and the office dog’s biscuit fund has been topped up by several kind benefactors.

If you have ordered any gifts for Christmas they will now be on their way to the recipient, packaged in a discreet ‘unfoxed’ white package bearing a Christmas sticker. There’s still plenty of time to order for delivery by the 25th so please take advantage of the website and our telephone ordering service (020 7033 0258) for any present shopping still to do.

For anyone with young readers to buy for we urge you to try our Slightly Foxed Cubs: The Carey Novels by Ronald Welch. These gripping novels follow the fortunes of the same family from their involvement in the Crusades to their service in the First World War. One Carey plays a part in the Battle of Crécy and another helps foil a plot to assassinate Queen Elizabeth. The Battle of Blenheim, Wolfe’s victory at Quebec, the French Revolution, the Peninsular War, the Crimea, the Indian Mutiny – in each volume a Carey is in the thick of it. Grippingly plotted and scrupulously researched, together they join up the dots of English history in a remarkably vivid and human way. The Cubs are bound in coloured cloth with specially comissioned artwork on the front and illustrations throughout, and make handsome presents. You could choose one or more books to give a taste of the series or you could go the whole hog and invest in a generous gift of the full set of twelve novels.

More details about the Carey Novels and some other present ideas for booklovers of all ages appear in the email newsletter. (click here to read it in its original format) But first, here’s a rather festive extract we’ve unearthed from our SF Edition of Portrait of Elmbury, John Moore’s ‘lyrical yet levelheaded combination of autobiography and topography’. Happy reading! 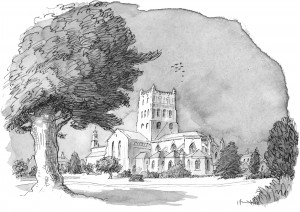 There was one day that fell in early December, more exciting than Christmas itself; the day of Christmas market. Always on this occasion my father’s firm provided sandwiches and drinks for all comers: dealers, smallholders, cowmen, shepherds, drovers. (The more substantial farmers were entertained to luncheon at the Swan.) Great were the preparations on the day before the market. Enormous joints sizzled in Old Cookie’s oven; baskets of loaves lay everywhere about the kitchen, huge pats of yellow butter, tongues, sausages, pasties. Maids were busy all day cutting sandwiches, which were piled on dishes and covered with napkins. There was an air of bustle and festivity all over the house; but, alas, the festive spirit coupled with the near approach of Christmas was too much for Old Cookie; when the last joint was roasted, she got drunk. Lachrymose, incoherent, completely plastered, she confronted my mother and was given the sack. Next morning, sick and repentant, she was re-engaged.

Although the sale did not begin till half-past eleven, the first beasts began to pass our window as early as half-past nine. Thenceforward for two hours there passed down Elmbury High Street a procession such as might serve as a country counterpart of a Lord Mayor’s Show. But here were no city financiers whose riches were scraps of paper locked in safes – riches which might disappear tomorrow if somebody else juggled with his shares more cunningly. Here was solid wealth, the real wealth of England, a sight that would have warmed old Cobbett’s heart to see: fat oxen, sleek and ponderous, white-faced Herefords curly haired between their straight horns, Shorthorns as rich-red as the fresh-turned loam, dark as the winter ploughland where the sweat stained their sides; flocks of sheep, broad and flat-backed so that the collies could run about on top of them, thick-woolled, black-faced Oxfords, whose multitudinous breaths in the frosty air made a mist which moved as their great flocks flowed like rivers down the street; and huge fat waddling pigs, sows whose bellies had brought forth great litters and which now brushed the earth between their short legs, bacons, porkers, Large Whites, Large Blacks, Middle Whites, blue-mottled cross-breds, sandy Tamworths and the ancient dappled breed of Gloucester Spots.

Here was the annual harvest of the great stock-fattening farms which lay in the rich valleys of the two rivers; here was a season’s consummation, the happy outcome of the marriage between English weather and English soil, delivered by the skill and patience of men whose grandfathers had owned their farms before them. To this end the turgid waters of last winter’s floods had left their rich alluvial deposit in the meadows, so that the spring grass sprang more greenly; to this end in Elmbury Ham in June, and in a thousand such great hayfields, sweaty men with pitchforks had built a village of sweet-smelling ricks; to this end swedes and turnips and mangel-wurzels, plump roots nearly as big as a football, had alternated in their proper rotations with golden corn and brown fallow on the slopes of the gentle hills which rose from the valleys. And now the purpose of all these labours was manifest.

Down the street towards the market on slow hoofs waddled the Champion Beast, great-shouldered, broad sided, deep-flanked; and a hundred more that were nearly his match. No man so poor that he would not taste a steak on Sunday; no family in such straits that they would not see a joint on their table on Christmas Day.

Just as the Lord Mayor’s Show provides its moments of comic relief, so did this splendid progress towards the Christmas market. The calf that planted its legs four-square and flatly refused to budge, though one man heaved at its halter and another pulled its tail; the fat goodwife with a couple of cackling geese under her arms; the bull which entered Double Alley and rampaged about there, so that even the Hooks made common cause against it: all these events were matters for mirth and jesting. And later in the day, when the market was over and the farmers with bulging pockets rollicked home – when the drovers rich with Christmas tips began their Christmas pub crawl – when the butcher who had bought the Champion Beast paraded him through the town with rosettes upon his horns, a mighty fat butcher with a mighty fat beast – what merry greetings passed, what practical joking went on! I shall never forget the butcher’s face wreathed in smiles as he met Mr Jeffs who had bred and fattened the champion; beaming at each other, they shook hands, and the crowd in the street cheered and shouted. I shall never forget the butcher’s obvious pride that he had paid the highest price for the best animal. Nowadays, it seems to me, too many people take pride in having bought something cheap; but the butcher was proud because he had bought something good, and had paid well for it.

And so dusk fell, and the lamplighter went round with his long pole, the gas lamps glowed yellowy, even that wan, cloudy nebulus that burned at the entrance to Double Alley, and the last of the country people went home. Only a few belated drovers still hung about the pubs; and the first carol singers gathered round our front door to tell their old tale of peace on earth and goodwill among men.