In the February of 2006, I heard, for the first time in five long and cold months, from my former best friend. (I’ll call her Marianne, after Jane Austen’s emotionally incontinent but lovable Dashwood sister.) Marianne re-opened communication with a text: ‘What do you think of Rufus Wainwright? He sings in this film, Brokeback Mountain. Come see it with me. I want you to!’

Marianne and I had been – that lovely word – ‘intimates’ for the best part of a decade. Our children moved as a pack; we took refuge in each other’s kitchens, swapped talents and baby clothes. We holidayed together, godparented for each other, talked on the phone at least once a day. When my husband smashed his knee in a fall, it was Marianne who baby-sat while I rushed to the hospital; when her childhood OCD flared up and made her too scared to move house, it was me who talked her through the door. I spoke proudly of her as ‘the sister I never had’; we even looked similar.

And then suddenly, the intimacy ceased. First, she said one of my children was ‘copying’ one of hers. Then she stopped answering the phone if I rang. After a month or so, I took round a birthday present for her daughter; though Marianne opened the door and accepted the present, she didn’t smile or invite me in. For reasons I couldn’t untangle, the friendship was over. It was like a death, and I had spent the months since in mourning.

Now here she was, demanding I see Ang Lee’s adaptation of an Annie Proulx short story about a pair of cowboys falling in love. I was wary. But when Marianne wanted something, she wanted it wholesale, consumingly. And I had missed her so. So along I went, and sat dutifully in a dark suburban cinema, watching two lonely young American men coping, or failing to cope, with their homosexuality. Rufus Wainwrig

Liz Forsyth is a writer and editor based in London. She’s just started reading Annie Proulx’s The Shipping News, but doesn’t, as yet, have any friends who’ve moved to Newfoundland. 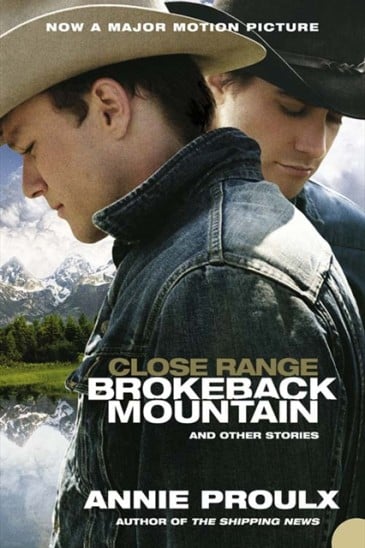 We had quite a celebration for our tenth anniversary in 2014 and now this summer we’ve reached what feels to us like another significant milestone – our 50th issue. You could say Slightly Foxed has reached middle age, but it still has a spring in its step and we enjoy putting it together as much now as we did when four of us sat round the kitchen table (one of us holding a baby who is now at secondary school) and planned the first issue. One of our somewhat irrational fears at the time was that we might run out of books to write about, and people to write about them, but the reverse has been the case. We know from the steady stream of suggestions arriving from contributors inside and outside the literary world that there are still countless unusual and fascinating books to discover. That’s another enjoyable aspect of editing SF: the proof, if one were needed, that you don’t have to be a ‘writer’ to be able to write.

Aspiring young writers of fiction wish to be stylish. For many of them style is more essential than content, perhaps more important than sincerity. They want their prose to be inimitable, like Conrad’s or Hemingway’s, so that readers might identify their authorship from a single paragraph. As a young man, I was certainly like that, even though fiction didn’t turn out to be my thing. And of course I preferred to read novels by writers who themselves had a pronounced style.

Recently I was given a copy of The Music at Long Verney: Twenty Stories by Sylvia Townsend Warner. It was a revelation. Years ago, when I was a struggling art student, I read and loved her novels, but I somehow failed to discover the short stories. Many had first appeared in The New Yorker, and eight collections in all were published. I began to read, and there was the gracious world of the mind that I remembered from her novels, the lush sentences with their ravishing, tumbling clauses, delicious rhythms, exquisite imagery, painterly detail, the fantastic sense of place.