Spring has arrived, and with it the delivery to the office of our new Spring issue, the latest SF Edition, Laurie Lee’s As I Walked Out One Midsummer Morning, and the fifth in our series of Rosemary Sutcliff’s novels, Dawn Wind.

Ahead of each delivery, we pore over spreadsheets, worry about stock levels, map out square feet and available bookshelf space, flick through fat folders of pre-orders and discuss quantities over the phone with Tracey at Smith Settle, our printers. And then the great day dawns . . . Delivery days are necessarily a team effort (this past year more than ever due to restrictions on helping hands) and require much orchestration. Thankfully, we are well-rehearsed. With Hattie as our conductor – noting locations for titles, ticking off stock and shuffling boxes – we dance up and down the stairs, a quickstep at first, then more of a slow waltz. When Dusty, Jess’s dog, tires of playing with our cardboard-box Tetris and begins to nudge tennis balls in our direction, we lament her lack of opposable thumbs and upper body strength. If only she could help.

When all is done, we get out the big cafetière and make coffee, fill up Paul the van-driver’s thermos before waving him off back to Smith Settle, and then turn to contemplate the book fortifications we’ve constructed.

No sooner are all the books safely stowed than we start to send them all out again – this time to intended recipients, most of whom require their usual hand-numbered edition. We form a chain: processing orders, packing books, printing post labels, bagging parcels. In our campaign against plastic, we gave up bubble wrap several years ago. Now, each book is wrapped in a length of corrugated cardboard to protect it and then slotted into a biodegradable envelope. By the end of the day, tired but happy, we are sitting surrounded by post bags, waiting for the postman. 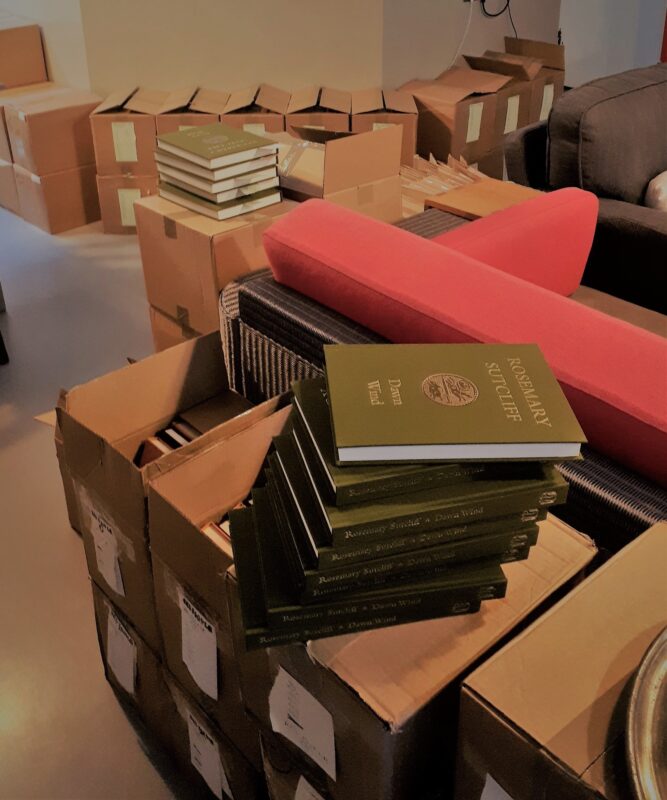 A recent podcast recording happened to fall just after one of this quarter’s deliveries, so I tucked myself away in the most sound-proofed corner of the bedroom, flanked by an ironing board, boxes of SF tote bags and several cushions to block out any noise. Not quite like recording around the kitchen table as we used to do, but perhaps one step closer.

When not in Hoxton Square or at my desk at home, I’ve been looking at local area maps rather than office floor plans and casting about for new walks. Time to visit Highgate Cemetery, which I’m ashamed to say I’ve not been to before. Admission is currently by timed ticket and is just the thing for a stroll in the fresh air – but with a quest for notable names thrown in.

I booked a slot for the East Cemetery, where Karl Marx is famously laid to rest, but there are plenty of other, more literary names to discover ‒ William Foyle, co-founder of the eponymous bookshop, the playwright Peter Shaffer, the novelist Alan Sillitoe. Leslie Stephen, father of Virginia Woolf and Vanessa Bell, and first editor of the Dictionary of National Biography, lies not far from the final resting-place of George Eliot, whose headstone also bears her married name, Mary Ann Cross. Her irregular life and lack of Christian faith meant that she wasn’t buried in Westminster Abbey. Not far from her is the publisher John Chapman, whose lodger she was for a spell and for whom she worked as an assistant editor.

The author Douglas Adams is here as well. To my delight I see a pot full of pens resting in front of his headstone, each one a tribute from a fan of The Hitchhiker’s Guide to the Galaxy. How fitting those pens are. Adams left behind an archive of 67 boxes of notebooks, letters, scripts, poems and to-do lists (a selection is soon to be published by Unbound). Prolific and successful though he was, the archive reveals his doubts about his writing. In one note he says: ‘Today I am monumentally fed up with the idea of writing. I haven’t actually written anything for two days, and that makes me fed up as well.’ But then comes another, more encouraging, note: ‘Writing isn’t so bad really when you get through the worry. Forget about the worry, just press on.’ 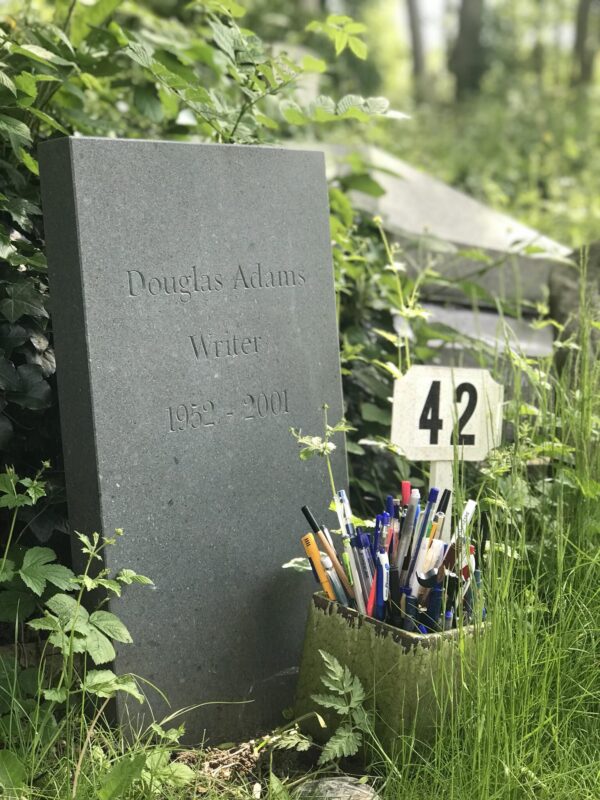 I’ve spent much of the last month proofreading a book we’ll be publishing this coming winter. For thirty years, from 1950 to 1980, the writer-cum-farmer Adrian Bell wrote a weekly column called ‘A Countryman’s Notebook’ for his local newspaper, the East Anglian Eastern Daily Press. His columns were, as his son Martin Bell says, not really journalism but prose poems about the natural life around him.

Now a selection of these beautifully crafted essays has been gathered together by Richard Hawking to form A Countryman’s Winter Notebook, the first, we hope, of a quartet of his writings on the seasons. In this first volume Bell writes of hedge-laying and leaf-gathering, the joy of mud and the arrival of storm clouds, the last rose of summer and the first snowdrops of spring. Each essay begins with some aspect of rural life, in the past or the present, and is at once impressionistic and specific in its portrayal of the moment in life he wishes to capture. Here he is on November, that dreariest of months.

November has been detested ever since we became a city populace, umbrella-poked, gutter-splashed. Ever since Hood wrote his famous lines to the month, that are all ‘no’, ‘no’, ‘no’, ending ‘No sun, no moon, no dawn, no dusk, no proper time of day . . . No-vember.’ We should all be farmers. As a farmer I never disliked November. On the contrary, harvest all home, ploughing well forward, beans ploughed in, wheat drilled and harrowed, the fields smooth carpets of vital brown, some already pricked with tiny needles of new corn. What a glad time November then was after a kind autumn such this has been, the work that mattered all done; and after that, our ‘go-slow’ (but at any other industry’s usual pace) of littering yards, ‘shaving’ corn stacks, ‘pulling’ haystacks – it was as good as a holiday.

We’ve commissioned the Suffolk-based artist Beth Knight to illustrate the essays with pen-and-ink drawings, and the first of her images has already arrived, of snowdrops and aconites. 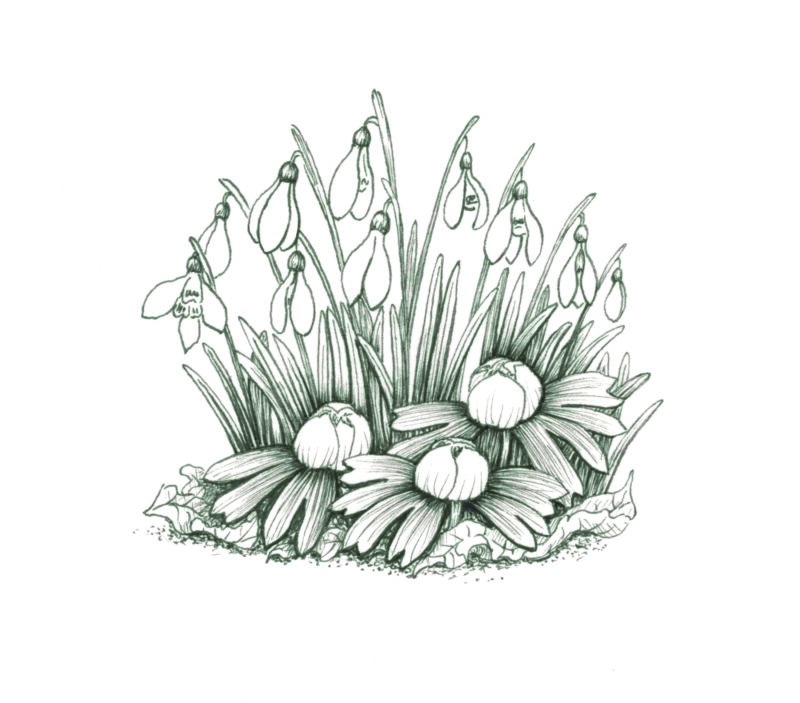 Up here on Dartmoor the snowdrops are still hanging on, but it won’t be long before they go over. Though it’s still quite cold, and we’ve had some heavy frosts at night, there are signs of spring everywhere. In the hedgerows the first hawthorn leaves are coming out and the blackthorn is in blossom, the banks along the lanes are carpeted with primroses, and wood sorrel is beginning to green the floor of the conifer woods. The Canada geese are back on the lake ‒ their domestic altercations wake us each morning ‒ and last week seven herons arrived to dine on the frogspawn that lines the water’s edge. The English language has some lovely collective nouns for birds – a parliament of owls, an exultation of larks, a murder of crows, a charm of goldfinches. And herons? A ‘siege’ or a ‘sedge’ or a ‘scattering’.

There are signs of spring in the village too ‒ people out digging in their vegetable patches or simply sitting on a garden bench enjoying the sun. One of the fifteenth-century cottages near us is being rethatched, nearby a dry-stone wall is being rebuilt, there are lambs in the fields and walkers on every footpath. Even Chudleigh, a puppy in Slightly Foxed’s early days but now greying round the muzzle and rather arthritic, has a spring in his step. Stanley, Office Dog no. 2, on the other hand is altogether too full of himself at the moment – a tray of sausages, left to defrost on the kitchen counter, was one sausage short when I came to put them in the oven. Why only one short? you may ask. That was the one nearest the edge, and so the only one he could reach.