We thought it might be cheering for all of us in these unusual and unpredictable times if we kept in touch with you via a weekly diary. It won’t be a work of literature, and it won’t be simply, or even mostly, about books, but just a way of sharing with you, wherever you are in the world, how the two of us are living our day-to-day lives in very different parts of England. We feel we’ve come to know so many of you as friends from your letters, emails and phone calls, and if there was ever a time for friends to keep in touch, it’s surely now. So here goes. Gail is writing from her West Country house on the edge of Dartmoor while Hazel is holed up at home in Highbury, North London.

It’s strange to see our London street so quiet. There are a few determined Lycra-clad runners appearing from time to time on their way to the little footpath that leads to the park. The postman is making his rounds, and the workmen are still busy painting one of the houses opposite, but most people are working from home, or simply staying indoors, and there are very few cars about.

It makes me think of our early years here in the late 1970s. Nowadays our neighbours in the three converging streets of big red-brick Victorian houses in Highbury, which lies between Islington proper and Finsbury Park, tend to be lawyers, media folk, people working in finance or in the mysterious digital world. Most of the solid old houses have been done up and often disembowelled, given steel and granite kitchens, basement playrooms and back extensions, and even in one case had a floor removed to create an atrium. In those early days there was a cosily shabby and random feeling to the street. We got to know the many visiting uncles and aunts of the Anglo-Indian family next door, and in the big white-painted house opposite lived a jolly extended Italian family who made their own (frankly terrible) white wine each year and invited us round to sample it. 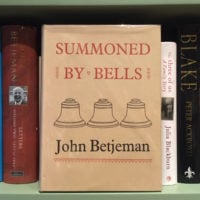 The big white house was apparently built and lived in by Mr Gestetner, inventor of the revolutionary duplicating machine, the complicated operation of which caused angst to so many secretaries (including yours truly) until it was finally superseded in the 1980s. These were the palmy days of Highbury, home then to the well-heeled middle classes, when John Betjeman, as he records in Summoned by Bells, visited his aunts in their large Victorian house near the Arts & Crafts church in Aberdeen Park, and as a young man paid agonized visits to his father’s factory in Pentonville Road, Islington, which he secretly had no intention of taking over (see SF no. 28). Now the wheel has in a sense come full circle, and prosperity has – for the moment anyway – returned to Highbury.

Today I went online in search of alcohol handwipes, as recommended, and discovered that a pack normally costing £6 is now selling for £27. This brought to mind Evelyn Waugh’s inimitable cad Basil Seal who remarks in that brilliant wartime satire Put out More Flags, published in 1942, that he wants to be ‘one of those people one heard about in 1919, the hard-faced men who did well out of the war’. In our next podcast, due out on 15 April, you can hear us discussing Waugh, both as a man and a writer, with his biographer Selina Hastings and his grandson Alexander Waugh. We did enjoy it. I hope you’ll join us. 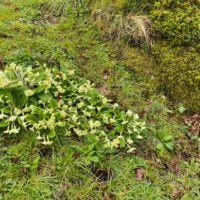 The primroses and celandines behind the house are out and some late daffodils are just beginning to flower. Whenever I lift my head from my desk, I can see them out of the corner of my eye ‒ a promise of new growth which is more than usually welcome this year.

In our professional lives at least, Hazel and I are generally rather out of kilter with the seasons. Spring may be on its way, but we’ve been preoccupied with the summer issue of Slightly Foxed, selecting some lovely pieces on books that somehow or other seem to speak of sunshine and travel and the sea (water-babies, a Cornish childhood, a trek on horseback in Andalusia, a picnic at Hanging Rock). Now that that issue has gone off to the printer, we’re turning our minds to the autumn.

Usually we get together to choose the content of each issue and then lay the articles out on the kitchen table and shuffle them around until we achieve a pleasing order. This time it will have to be done in isolation. But really we’re very fortunate. We’ve both worked from home for a long time, so we’re used to only being in touch by phone or email.

Still there is no denying that these are strange times, and in the absence of meetings and publishing events and general conversations we’re going to need new sources of stimulation. Or perhaps I should say old sources. I live in a house full of books all waiting on the shelves to tell me a story, open up new worlds, introduce me to strangers, suggest different ways of thinking. So I have made a resolution. Each week I will choose one shelf and read something new from it. And because I’m an editor and believe that less is more, I’m also going to do some weeding to make space for new things. 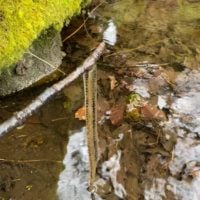 My other resolution has been to go for long walks. Chudleigh and Stanley, the office dogs, are used to the footpaths and bridleways around the village, but yesterday we walked from Sanduck in a neighbouring valley down through woodland and fields to the village of Lustleigh where, at the beginning of the last century, Cecil Torr lived and recorded the doings of his neighbours in Small Talk at Wreyland (see SF no. 8). We saw deer grazing on a high pasture, rabbits diving into the undergrowth at our approach, moorhens darting about in a pond. In one of the many streams that flow down the valley to join the River Bovey we also came across something I’d never seen before ‒ several long ropes of translucent jelly filled with what look like eggs. Can anyone please tell me what they are? Some kind of spawn, I imagine, but from what?