On Friday evening I had just settled comfortably into that delicious moment between waking and sleeping when there was a loud crash from the floor above my head. My first thought was that my husband had fallen over something, but since there was no cry for help I decided no action was required. After a moment or two of silence, however, sounds of banging from above began again. My second thought was that my husband might now be unable to speak and was banging on the floor to attract my attention, but he’s a hardy sort, and ashamed as I am to admit it, after only a moment’s hesitation I snuggled down again and pulled the bedclothes over my head.

Now it sounded as if furniture was being moved, lights flashed on and off outside the bedroom door and there were heavy footsteps on the stairs. A third possibility occurred. Perhaps someone had broken into the house and engaged my husband in some kind of life-and-death struggle – in which case what use would I be? Unwillingly I sat up in bed, wondering whether a coat-hanger would be any good as a defensive weapon, when the bedroom door opened and my husband stood framed against the light.

‘Yes, the grey one from next door. I’ve tried to show it the way out but it just hides behind the furniture. I can’t find it now, so I think it must have gone.’

Had it? Well, no. It was finally located late next day, mewing piteously behind the tank in an apparently inaccessible corner of the loft. When the rescue was over, our neighbours’ gratitude was touching, but we both felt guilty. Should we have looked harder? Might we have discovered it sooner and saved the cat a trauma?

We don’t have a cat of our own any more. It was a sad day when our last one, Dan, died suddenly from a stroke. I have nothing whatever against dogs – I grew up with one, and having a dog is almost a necessary qualification for joining the Slightly Foxed team – but I am a cat person. I was brought up on Kathleen Hale’s heavenly Orlando the Marmalade Cat books and my first kitten was called Tinkle after Grace and Orlando’s naughtiest kitten. Later I enjoyed Kathleen Hale’s charming autobiography A Slender Reputation (see SF no.14). Our Dan wasn’t in fact a particularly attractive personality, but as my husband said when a friend spoke disparagingly of their family cat, if you have an animal you must be on its side. At first the house felt empty without him, but I’m afraid that mourning was all too soon followed by a feeling of relief.

When I was growing up, having a cat was simply a matter of including enough tins of KiteKat in the grocery order to last the week. I always thought it looked delicious. Only in the most extreme circumstances would a cat ever come face to face with a vet. In those unenlightened days they just got on with it, and when we first had cats of our own, the same sink-or-swim principle applied. But gradually things began to change – heavy bags of vet-approved biscuits, weight-watching, check-ups, vaccinations and pet insurance, not to mention those confrontations in the kitchen with the bullying toms from around the area and holidays blighted with worries about whether the automatic cat-feeder would open. I began to realize I wasn’t up to the job.

So now local cats of every shape and colour meet and make free in our garden (which reminds me of another children’s book, about a cat with a secret life, Posy Simmonds’s gorgeously illustrated Fred). Our cats were never very good at defending their territory, but at least they tried. Sometimes I still long for another fluffy kitten curled up on a chair in the kitchen, a welcoming mew to meet you at the door when you arrive. Should we get another cat I asked a friend.

‘No, you need exercise,’ she answered briskly. ‘Get a dog.’

Now that the lockdown has eased a little, we’ve been able to visit neighbours in the village for a drink in the garden, and they in turn have come over to us. There’s been talk about family, what’s been happening locally (rather a short conversation, this, in the circumstances), what we’ve been reading or hearing or watching, and, of course, what the future holds. But the subject that has had us most gripped is ‘the garden’. Can there be anything nicer than wandering round someone else’s garden with a glass of wine on a sunny summer evening? So much to admire, and, if I’m honest, sometimes secret relief that one is not responsible for weeding that particular bed or pruning all those roses. 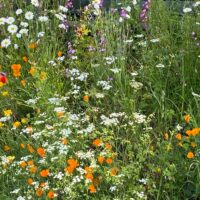 The village has a remarkable range of gardens, from tiny cottage gardens full of sweet peas, lupins, hollyhocks and the odd climbing rose or honeysuckle, to much grander ones where the house is swathed in wisteria and the herbaceous borders take one’s breath away. In some the lawn is a smooth sheet of green that calls for a game of croquet or even a bowls match. In others, meadow flowers run riot through uncut grass and there’s only a narrow mown path that invites you to explore.

I love the variety of them all, each so perfectly suited to its situation. One friend in the village who is full of ideas and energy had planned a flower festival this month in the church to raise funds for its fabric, and many of us were going to open our gardens to the public over the same weekend and hold a plant sale on the village green. I’m sad that it has had to be cancelled but we’ll reschedule for next year, I hope. For now we’re swapping seeds and seedlings, and the two village bus shelters are full of surplus plants in need of a good home.

Much as I love other people’s flower gardens I must admit that I have become obsessed by growing things I can eat. Some years ago, down in the bottom field, we planted a small orchard of apple and plum trees. Tom Putt, Brown Snout, Sweet Alfred, Woolbrook Pippin, Dittisham Damson, Oaken Pin, Don’s Delight, Pitmaston Pineapple – what glorious names they have. Most are local varieties chosen because they can cope with Dartmoor’s climate. Some are for eating or cooking, but, being in the West Country, we also thought we might make cider.

When the children were young, on long car journeys we often used to listen to an audio book of Roald Dahl’s Fantastic Mr Fox, in which the eponymous hero outwits Boggis, Bunce and Bean, the meanest and nastiest farmers you could ever hope to meet. To celebrate their victory Mr Fox and his friends hold a feast which ends with some cider from the secret cellar of one of the farmers:

‘It’s my turn,’ said Badger, taking the jar and tilting his head well back. The cider gurgled and bubbled down his throat. ‘It’s . . . it’s like melted gold!’ he gasped. ‘Oh, Foxy, it’s . . . like drinking sunbeams and rainbows!’

I rather agree, but as each autumn comes round I’ve resisted the temptation to make the stuff myself. I know that if we had gallons of cider sitting in the larder I’d drink the lot, and then, ‘with some cider inside her inside’, I’d be publishing not Slightly Foxed but Slightly Sozzled.

‘An early morning walk is a blessing for the whole day,’ wrote Henry David Thoreau, and our morning walk has now become the central feature of most days – the route chosen by Maggie (or Princess Margaret as she is more grandly known), a King Charles spaniel crossed with a bichon frise. The rest of us follow on. We are lucky enough to live in the beautiful Sussex countryside. It is less wild than Gail’s edge of Dartmoor, less urban than Hazel’s Highbury, but we have the glorious South Downs around us and London is only an hour away by train.

When I’m not working on projects for Slightly Foxed and the classic travel publisher Eland, life revolves around our four rescue dogs, the cottage garden, a miniature wild flower meadow with stretch of scrubland (inspired by Isabella Tree’s Wilding) and a large vegetable patch. The vegetable patch has been useful as it keeps my husband occupied in the absence of horse-racing – one of the benefits of lockdown. 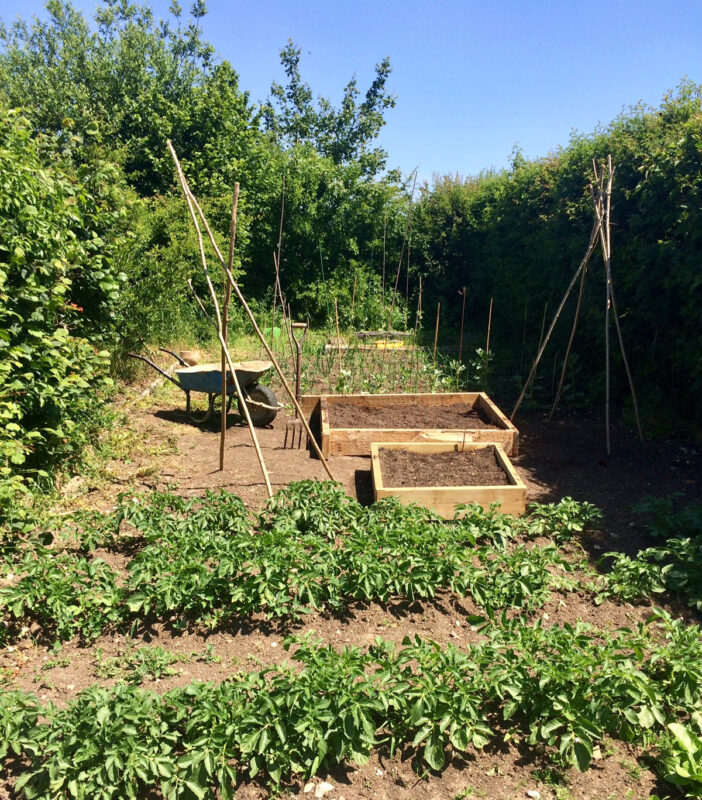 This year, aiming at self-sufficiency, we donned our dungarees and took delivery of a ton of compost, vegetable boxes were fashioned from left-over pallets and climbing trellises from hazel found in the woods. Most of our windowsills are covered in seedling trays – at present there are chillies in the bedroom, coriander shoots in the dining-room, lettuces in the porch and runner beans in the bathroom.

Hazel has already written about the pros and cons of digital communication. I enjoy communicating as part of my marketing and publicity job and have embraced everything available ‒ Zoom, Skype and What’s App. Enthusiasm waned a little, however, after a photograph of my first attempt at a Pilates class on Zoom appeared on Facebook, my husband having a similar enthusiasm for sharing information. I had my revenge when he asked if I would give him a trim. We bought some electric clippers for use on both him and the dogs, and he is now sporting a rather fetching Friar Tuck-style haircut.

With so much other activity, I’ve not had time to start the ukulele course I signed up for with our friends at The Idler magazine, or to get the water-colours out, and I’m rather ashamed to say that I haven’t missed my weekly trips to London, apart from seeing the Foxed team and attending the occasional literary event. However two totally different books ignited a familiar spark – the wickedly acerbic Diary of a Bookseller by Shaun Bythell, owner of the largest second-hand bookshop in Scotland, and a rereading of Virginia Woolf’s Mrs Dalloway, whose walk down Piccadilly and pause at Hatchards bookshop window reminded me of all the events we’ve had there in the past. We and the Biographers’ Club recently launched a series of talks at Hatchards by winners of the Slightly Foxed Best First Biography Prize, and we had Jonathan Phillips lined up this summer to talk about his much praised The Life and Legend of the Sultan Saladin. Let’s hope we can reschedule.