Erich Kästner was born in Dresden on a snow-filled February day in 1899, the adored only child of Emil and Ida Kästner: he a master saddler fallen on pinched times, she – eventually – a hairdresser. Each had begun life in small-town Saxony, Emil coming from a line of joiners and blacksmiths, Ida with a background in bread, beer, butchery and horses. ‘And out of all the butchers, blacksmiths and horse dealers, one solitary member of the family, little Erich, only son of little Ida, has become – of all things – a writer!’

When I Was a Little Boy (1957) is the autobiography of this clever, spirited, loving child, who grew up to write political journalism, screenplays and children’s books. His adult life in the Third Reich was often difficult, even dangerous, but not a breath of that disturbs these pages of affectionate recollection.

Writing in his fifties, Kästner looks back on the days of trams and of parades before the Kaiser, with his huge moustaches. He recalls doing homework by the light of a smoky paraffin lamp, and running errands before school, returning to his third-floor family flat with a spilling can of paraffin and a bulging bag of liver sausage, black pudding and a huge warm loaf. There, he is given a slice with hot malted coffee, before he grabs his home-made satchel and races off to school. And though in adult life he travelled far from his birthplace, his love for it shines through in almost every chapter.

First, there is Dresden itself, ‘a wonderful city, full of art and history’, where ‘past and present lived in perfect unity . . . and harmonized with the landscape – the Elbe, the bridges, the slopes of the surrounding hills, the woods, the mountains . . .’ He loved the glittering shop windows at Christmas, and ‘the vista of the city in silhouette, with its noble and venerable towers’, but the cramped little flat at the shabby end of the Königsbrücker Strasse where he grew up was far from this ancient grandeur.

I remember No. 48 perfectly well – the vestibule, the window-seat on which I used to sit looking down at the backyards, the steps of the stairs on which I used to play. For the staircase was my playground. It was here that I used to set up my fort . . . Fierce battles took place here . . . And the postman, and little Frau Wilke who lived on the fourth floor, had to take enormous steps, like storks on a bed of lettuce, in order not to endanger either the victory or the defeat.

Erich Kästner had the gift, which most clever children have, of concentrating completely on the task at hand. In this, perhaps, he was most like his quiet, undemanding father, who could make or mend anything well – a saddle, a bridle, a briefcase, a marvellous Christmas toy. But essentially, in that little flat, Erich was his mother’s child, and all her concentration was on him.

Ida Augustin had grown up with brothers and sisters on an isolated farm, and one of the most appealing of the delightful illustrations in this book is of her determinedly making her way across a snowy field towards the distant school, leaving a long line of tiny footprints. She was clearly very bright, but the choice of career for such a girl in the late nineteenth century was limited: you went into service or you married. An intro-duction by her aunts led her to the sober, industrious young Emil Kästner, who was looking for a capable partner in life.

For Ida this meant dutiful cooking, bookkeeping and piece-work corset-making until, after seven years, the longed-for baby finally made his appearance. And with this little creature her drive, devotion and ambition finally found direction. ‘All her love and imagination, all her industry, every moment of her time, her every thought – in fact her whole existence, she staked, like a frenzied gambler, on one single card – on me! . . . She loved me and nobody else’, and at home and at school there seemed no option but for Erich to become the perfect son. ‘I dared not disappoint her.’

Reading this with modern eyes, one might think that here was potential for disaster, but this model child flourished, and When I Was a Little Boy is largely filled with the everyday happiness of a close-knit, hardworking family. While her husband, after a day at a suitcase factory, earns extra money mending neighbours’ bags and purses, Ida trains as a hairdresser, and a corner of their flat becomes her successful salon. At school, Erich is soon at the top of the class. He is athletic, and from the age of 5 determined to excel at gymnastics. He’s also a responsible boy: when Ida’s rich, horse-trading brother Franz buys a grand villa not far away, his wife Lina entrusts little Erich with the task of carrying large bags of money to the local bank. And he has good friends, with whom he plays in the summer holidays.

Through all this activity he has since earliest childhood one ambition: to become a teacher. This is fed partly by natural inclination and partly by the lodger his parents squeeze into the flat. Cheerful young Paul Schurig takes the ‘beautiful sunny room with breakfast’; young Erich has plenty of opportunity to observe the teaching life: the routine, ‘the blue exercise books and the corrections in red ink’, the afternoon naps before the evening marking. His parents applaud his choice of career, but it takes just one lesson, when he stands before a class at the age of 17, for him to realize he has made a mistake. ‘I was no teacher, I was a learner.’ That evening he breaks the news to his parents: what he wants to do is go to university. It takes but a moment for his mother to declare, ‘Very well, my boy. You shall study!’

When I Was a Little Boy won the international Hans Andersen Medal in 1960, and it is a delightful book. The tone is gentle and avuncular, indefinably Germanic, filled with aphorisms and asides to the reader. Its optimism and buoyancy are shaded only occasionally by sadness. Of the city he so loved, bombed to pieces by the Allies in 1945, Kästner writes bleakly, ‘It had taken centuries to create its incomparable beauty. A few hours sufficed to spirit it off the face of the earth.’

Other sorrows lie closer to home. Though he generally loves his life as an only child, at Christmas Erich longs for brothers and sisters. To enter a room filled with presents – an elaborate toy stable, with exquisite tiny mangers filled with hay, made by his father; a heap of ‘roller skates, building bricks, coloured pencils’ from the shops of Dresden, bought over weeks by his mother – is to find the weight of their love for him almost unbearable. What will happen if he seems to like the gift of one parent more than that of the other? It is a huge relief when they can all leave and make their way through the snowy streets to his aunt and uncle and cousin Dora, for spiced buns, games and carols.

The other poignant passage relates to Ida’s intermittent periods of depression. The illustrations by Horst Lemke are generally charming – light, spry, filled with sharp observation and humour. But all at once, you find yourself looking at something very different: a sky filled with black clouds, a tiny figure looking down from a bridge at the racing waters of the Elbe. Erich has returned from school to find a note: ‘I can’t go on.’ He bolts out of the door and makes for the river, shouting wildly, ‘Mamma! Mamma!’ And eventually he finds her, and she lets him bring her home.

‘The last chapter did not sound very cheerful,’ Kästner writes. ‘A child was troubled, and that child was myself. Perhaps I should not have told you about it? No, that would have been wrong of me . . . he who denies that trouble exists would be a liar.’ And as he would gently say, troubles are made to be overcome: his mother does recover. In his adolescence they take long hiking trips together, a further opportunity for Kästner to indulge his love of stuff. The book is filled with lists: of saddlery tools, hairdressing equipment, school books; and here are the essentials for these summer days: ‘iron-tipped alpenstocks, a Thermos flask, containers for butter, sausages, eggs, salt, sugar and pepper, a saucepan for heating Maggi soups . . .’ The lists serve to anchor the narrative both in the period and in the author’s sensibility: here is someone who makes the most of everything he finds in the world around him.

It is the First World War which brings his childhood and youth to a close. No one can yet imagine that Erich Kästner will become the author of one of the best-loved children’s books of the twentieth century, in which the son of a hairdresser joins with new friends to track down a thief to a bank in Berlin. Emil and the Detectives (1929) has been translated into almost sixty languages. In 2013 my friend Carl Miller adapted it for the National Theatre’s Christmas production, and it was seeing this brilliant piece of theatre which led me to Kästner’s classic memoir.

Extract from Slightly Foxed Issue 56 © Sue Gee 2017
This article also appeared as a preface to Slightly Foxed Edition No. 40: Erich Kästner, When I Was a Little Boy

Sue Gee is at work on a new novel, The Summer of Für Elise. 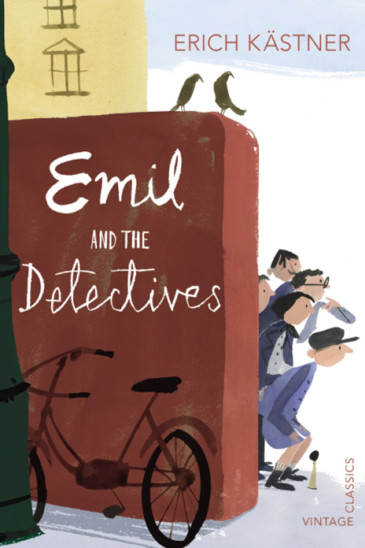