I have a Russian wife. We work together – articles, talks, translations, books, to keep the wolf from the door. Sometimes, when a bigger than usual energy bill slides through the letterbox, or the car breaks down or the tax-man cometh, one of us will look at the other with a rueful grin and say: ‘The solution as I see it, Comrade, is to work harder.’

It’s a direct quotation from Animal Farm (1945) and the character we are quoting is the big carthorse Boxer, eighteen hands high, and the stalwart representative of the proletariat in George Orwell’s book. The quip consists in the fact that merely to work harder is not the solution. Nor was it the answer to the problems faced by the Russian people in the wake of the 1917 Revolution and the era of Lenin and Stalin. But Boxer’s faith in hard work is as admirable as his fate is shocking, and for all the story’s humour, it is Boxer who gives it its tragic centre and its emotional power.

Most of us have read Animal Farm. We all know pretty well what it is: a satirical allegory in the form of a fable, and a parable on the history of Communist Russia from the 1917 Revolution to the end of 1943. That would be my literary definition, to which I would add that the book also has a wider symbolic purpose. In other words it’s about the Revolution but that’s not all it’s about. And while we know what the book’s about, what should be better known is how difficult it was for Orwell to get it published. One American publisher rejected it because he said there was no real market for animal stories. And even after it was published some bookshops placed it in the children’s section.

You could of course argue that Orwell had nobody but himself to blame, because he called it Animal Farm: A Fairy Story, an ironic subtitle to say the least. But any bookseller with a grain of sense should have recognized at once that the ‘fairy story’ possessed a meaning far beyond talking a

Christopher Rush has been writing for thirty-five years. His books include the memoirs To Travel Hopefully and Hellfire and Herring, and Will, a novel about Shakespeare. His latest novel, Penelope’s Web, was published in 2015. 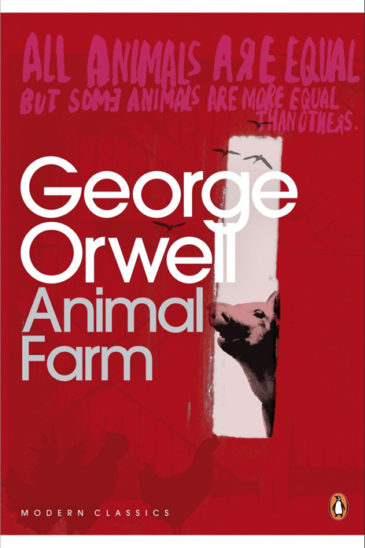 It was a bright cold day in April and the clocks were striking thirteen.

That first arresting sentence of Orwell’s Nineteen Eighty-Four transports us immediately into a world that is real enough (the swirl of gritty dust, the acidic sickly gin, the smell of boiled cabbage) but is also alien and fantastic. Even now, in the age of the 24-hour clock, that number thirteen startles you, for no clock ever does physically strike thirteen, and its undercurrent of unluckiness adds to the sense of unease. It’s one of the best opening sentences I’ve ever read.

It’s spring again, and a bit of news that feels cheering in today’s disordered world reaches us via an unsolicited email from ‘the world’s leading market intelligence agency’. It seems that the number of Brits who bought a print book was up last year from 51 per cent in 2018 to 56 per cent. The main reason people gave was that they prefer physical books to reading on devices. E-books certainly have their uses, but there are very particular experiences attached to the reading of a physical book, particularly a second-hand one – its look, its feel, its smell, its history as evidenced by the clues left on it and in it by previous owners. Every physical book, like a person, tells a story of its own in a way no digital book can, however convenient.