Emily’s Walking Book Club chose My Grandmothers and I for their July read.

It strikes me as a surprisingly common, though little remarked upon, fact that one’s grandparents form two very different pairs.

I suppose this seems especially pronounced if I think of my daughter Vita’s grandparents – one side Jewish and the other side descended from the Fascist Oswald Mosley. I can see it too with my own grandparents – one grandmother fled Vienna as a child in the 1930s, whereas the other came to London from a family long-established in Plymouth. It seems astonishing that time and again two people can come together from such different backgrounds, thus giving their progeny two very diverse sets of grandparents. A walking book club member informs me this is due to the psychological inevitability of shunning one’s own background and seeking its opposite in one’s partner. I would be intrigued to see if you too, dear reader, have noticed this phenomenon.

Diana Holman-Hunt wrote brilliantly about her childhood in which she was parcelled between her grandparents in her very charming memoir My Grandmothers and I, beautifully published as a neat little paperback by Slightly Foxed. There is a stark contrast between life in the Freemans’ well-staffed comfortable country house, and the Bohemian squalor of the Kensington abode of ‘Grand’ – the extremely eccentric widow of the Pre-Raphaelite artist William Holman-Hunt.

Diana’s life with Grandmother Freeman seems relatively happy, if lonely. For friends, she has to turn to the servants, and ‘Cherub’ – the statue on the fountain – with whom she imagines flying across the gardens. When the servants club together and give her a teddy bear for her birthday, ordered especially from Selfridges, Diana’s affection for it is transformed from sweet to moving when we realise it’s not just because she has no real friends to play with but because her other presents are so inappropriate: her father, who is away in India, sends her a leopard skin, and her grandparents give her a string of pearls, whose beauty and value will turn out to be of help in years’ to come, but are far too sophisticated for a little girl to appreciate.

Life at the Freemans has certain quirky downsides – such as the torturous brace which Diana must wear to improve her posture, and the list of daily tasks which is pinned to her curtain every morning. We are also treated to Diana’s glimpses of the more adult world in which she inhabits – the butler is always drunk after lunch, and one of the maids gets pregnant. There is the added humour of the clash of her childish perspective and our adult understanding, such as when she writes about her uncle’s friends, the ‘jolies laides’ – she discusses them with the servant Fowler, who remarks, you can hardly ‘call her jolly and I doubt if she’s a lady’. The real sadness here, however, lies in Diana’s early understanding of the fact that she will only be appreciated if she is sufficiently entertaining, being urged to ‘utter’ and regale her grandparents with stories, or else be banished from their company.

When she’s sent off to stay with Grand, however, we realise how lucky Diana’s been. Though she immediately flings her terrible brace into the fire, she has entered a world where breakfast is usually a rotten egg, and where she has to sleep curled up on a tiny scratchy sofa – examples of Grand’s despising ‘Brother Ass’, the body, in favour of nourishing the mind.

Grand’s eccentricities are extraordinary. For instance, before bed, the maid lays out a complex trap of trip wires and bells, to catch any thieves after all the great works of art, and, Grand adds, to stop them being murdered in their beds. Terrified, Diana asks, then what?

‘You will spring out of bed and twirl this large wooden rattle, round and round, out of the window, and I will blow several short sharp blasts on that whistle tied to the end of my bed.’

Grand is horribly stingy, and Diana relates the horror of having tea at the Tate:

I always felt embarrassed with Grand asked the waitress for two cups and saucers and a jug of boiling water.

Grand would then produce her own bag of tea leaves and envelope of powdered milk. But her generosity to pavement artists is even more embarrassing:

If she spotted one, she would never pass him by, but would retire discreetly to a doorway, or press against the railings with her back turned to the passers-by. Then, to my confusion, she would lift her skirts to find the chammy-leather pouch of money which she wore concealed, suspended from her waist. Flushed with effort, she would at last approach the artist and hand him a piece of silver, saying ‘If you are ever desperate and need to earn a shilling, you can come and sweep the leaves out of my area and scrub my front door steps. My cook will give you a cup of soup. You need never starve, I am your friend.’

In showing her grandmothers’ many oddnesses, Diana Holman-Hunt is so good at capturing their exact manners and cadences of speech that this memoir of what must have been a very difficult childhood is transformed into a comic masterpiece. Moments of poignancy remain, however, such as when Diana’s train pulls into London and she sees a man standing beside her Grand, waiting to meet her:

‘That must be my Papa!’ I said, jumping up and down.

The train guard dispels her excitement by revealing it is in fact the Station Master.

As the book progresses, and Diana grows up, the balance in tone shifts. The funny, mad and charming portrait – albeit with glimpses of terrible sadness and loneliness – is abandoned as Diana begins to see the growing desperation of her situation. There is a garish flash of an episode where her father visits, rescues her from school and takes her out on the town. She has nothing to wear but her confirmation dress. Next, we see Diana on her return from a year in Germany; her father – seemingly bankrupt – was unable to pay the Baronin with whom she stayed and sent her a note advising her to return to Grand and get a job. Grand, meanwhile, has lost her mind. Diana, ever resourceful, sells her pearls, sleeps on the cold attic floor, and attends secretarial school, with scarcely enough money to eat. As no one has paid for her to be presented and ‘come out’, she is shunned by her other relations, and it becomes clear there is no one who can look after her and she has no means of survival. Salvation comes eventually when Grandfather Freeman writes to tell her she must come and stay with him (Grandmother Freeman has died). When she returns to their Sussex home, Diana gets drunk and falls into bed.

This drunkenness seems to me to be such a sad, bleak ending. It is as though Diana longs to return to the naivete of that childhood world of imagination and innocence, playing with Cherub and the servants, but now – as an adult, with her place in the world shown to be so precarious – the only way she can return to this state of oblivion is getting blind drunk. Not that the ending detracts from the book, rather it saves it from being all charming nostalgia and eccentricity, tempering it with the bitter note of tough adult reality. Those who want to know what happened next might find this obituary in the Independent enlightening (and reassuring).

Emily’s Walking Book Club greatly enjoyed My Grandmothers and I. One walker said they would have loved to listen to it on the radio, read by someone like Maggie Smith, which we all think would be brilliant. So, does anyone know a radio producer who might be intrigued? If so, please please send them a copy. 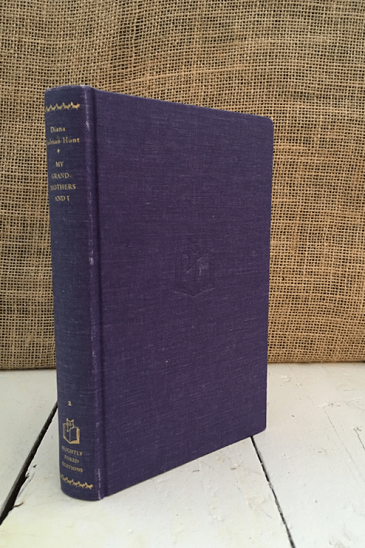