As I walked through the quiet twilight streets of the little Scottish fishing town in which I live, I unexpectedly came across two figures lounging on a pair of deckchairs. One was dressed in dark trousers, a red tartan jacket and matching tam-o’-shanter, while the other wore a silver sequined dress and an elaborate blonde wig. Although they were both strangely motionless, it was only when I got much closer that I realized these were not actually living people. They were dressed-up plastic skeletons, their gaping mouths laughing, their bony fingers pointing at me. How macabre, I thought, how grue­some. How very Stephen King.

Here I must confess that I’d never read any of King’s fiction. Although more than 350 million copies of his novels have been sold, something about the way in which they were marketed had always put me off and I’d dismissed him as a writer of sensationalist horror. I’d forgotten that horror was a genre I’d happily devoured as a teen­ager, mostly in bed, under the blankets, by torchlight. Vampires, werewolves, ghosts and ghouls, in all the classic novels: Mary Shelley’s Frankenstein, Bram Stoker’s Dracula and H. P. Lovecraft’s The Thing Without a Name. Perhaps now, I thought, over half a century later, it was time to abandon my preconceptions and give Stephen King a try.

My local bookshop offered a wide range of his work and I soon discovered that King didn’t just write horror. He also wrote thrillers, science fiction, fantasy, as well as books about the supernatural. Born in Portland, Maine, in 1947, he began writing while he was still at school and sold the stories to friends. His first officially published story, ‘I Was a Teenage Grave Robber’, was serialized in four issues of Comics Review in 1965. Now, in addition to his fifty-eight novels, there are five books of non-fiction, seven novellas and over two hundred stories published in eleven collections. Intrigued, I chose his th 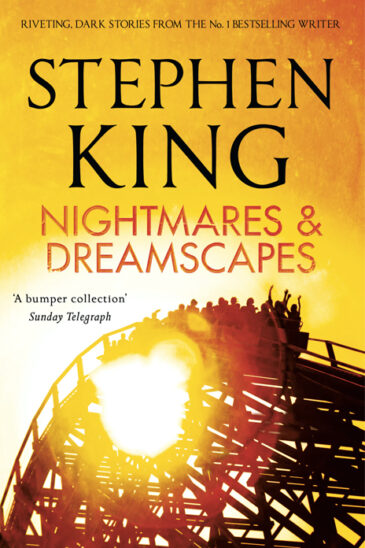