Home » Et cetera » Articles & Extracts » This is a story about the last gnomes in Britain . . .

This is a story about the last gnomes in Britain. They are honest-to-goodness gnomes, none of your baby, fairy-book tinsel stuff, and they live by hunting and fishing, like the animals and birds, which is only proper and right.

This story concerns their exploration of the Folly Brook, on whose banks they dwell, and of their search for Cloudberry, their long-lost brother, who years ago went up the Folly and never returned. You may not believe in the Little People, but that is because most fairy books portray miniature men and women with ridiculous tinsel wings, doing all sorts of impossible things with flowers and cobwebs. That sort of make-believe is all right for some people, but it won’t do for you and me.

If you don’t believe in the Little People, I would ask you to make yourself as small as possible (which is horribly difficult) and keep very quiet (which is more difficult still) and watch and wait by the streams and in the woods, as I have done. And suddenly you will understand that the birds and wild animals are the Little People! Such a simple fact, and yet we never realized it! There are water sprites, such as wagtails and kingfishers, reed warblers, buntings, water-voles and water-shrews. And there are goblins! Watch the wood mice among the leaves, the hedgehog hunting at twilight, the squirrels swinging among the trees. There are goblins with wings, goblins of the night, such as nightjars and owls, which are rather frightening. And in the larger, wilder woods are trolls, the lumbering cautious badgers, who walk by night and are seen by few mortals.

And, alas! there are giants. But you must read this book to find out to what order giants belong.

My gnomes are but a very short step (for the normal imagination) from the wild woodland people. They live with birds and beasts, and can never be far from water. That is the reason why children instinctively love water, and why Ireland is the last stronghold of the Little People; it is wild and wet, and there is no locality a gnome likes so much as a place which is ‘wild and wet’.

In telling this story I must ask the reader’s indulgence for one flight of fancy. I have found it necessary to allow my gnomes and animals the power of speech. As this is a book for young people no doubt they will forgive me, for it makes the story easier to follow. In other respects it does not often go beyond the realms of possibility. Warwickshire is one of the last English counties where one might meet with a fairy; surely William Shakespeare knew this when he wrote A Midsummer Night’s Dream. 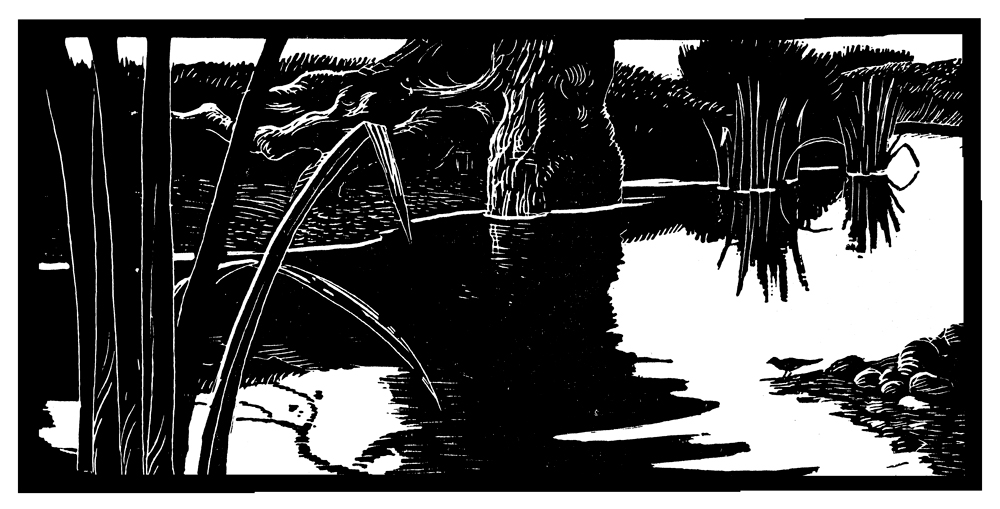 It was one of those days at the tail end of the winter when spring, in some subtle way, announced its presence. The hedges were still purple and bristly, the fields bleached and bitten, full of quarrelling starling flocks; but there was no doubt about it, the winter was virtually over and done with for another seven months. The great tide was on the turn, to creep so slowly at first and then to rise ever higher to culminate in the glorious flood, the top of the tide, at midsummer.

Think of it! All that power, all those millions of leaves, those extra inches to be added to bushes, trees and flowers. It was all there under the earth, though you would never have guessed it.

After a soft grey morning, the sun had slowly broken through the clouds, and every blackbird and thrush in Lucking’s meadow began to warble and tune up; the first opening bars of a great symphony in praise of Life. The willow bush by the Folly Brook showed silver buttons up every slender wand and on the rough grey bark of the leaning oak tree on the other side of the pool three sleepy flies were sidling about, enjoying the warm rays.

At this spot, for some reason known only to itself, the Folly Brook turned at a right angle.

Beneath the oak the water had washed away the sandy bank, and many winter floods had laid bare some of the massive hawser roots which projected in a twisted tangle from the soil of the bank. The sun, shining full on the steep bluff, threw shadows from the overhanging roots, so that underneath all was darkness.

Close to the margin of the glittering water, there was a miniature beach of coloured shingle and white sand; and from the glare on the stream, wavering bars of reflected light played to and fro on the bulging trunk of the oak. These light bars moved up and down in ripples, fading away when the sun was dimmed for an instant by a passing cloud.

It had been a dry winter and the Folly Brook was running fresh and clear, higher than in summer, of course, but quite undimmed by flood-cloud.It was so clear that near the beach every stone and pebble on the bottom could be seen, though where the water was deeper, all was tawny obscurity, the colour of ripe old ale.

Near the bank, the tangled reeds were as white as bleached bone, though if you had looked more closely, sharp green sword points could have been seen just beginning to pierce the dead vegetation. Later these reeds formed a deep green thicket, the strong juicy blades growing so close together that only a water-vole could slip between. The bank on the side opposite to the oak shelved gradually to the water’s edge, and here Farmer Lucking’s cattle came to drink. They had poached and punched the soil at the ‘marge’ until it was in an awful mess and the grass for some way up the bank was quite worn away. But in the stream itself there was little mud, for the bottom was hard sand and shingle. Most of the mud which the heavy stolid beasts had collected to their knees was soon washed off by the current if they stood long enough in the stream.

Something moved in the shadow under the root. At first you might have thought it was a water-rat or a mouse; then, if you had waited long enough, keeping very still (for the Little People usually know when any mortal is about), you might have been lucky enough to see Baldmoney.

He came out from under the root very slowly, peeping first one way and then another, listening.

Up among the silver willow studs swung a tit, a beautiful little sprite splashed with a blue as azure as the patch of spring sky above.

It was the ‘all clear’ for Baldmoney. The little man ran, like a mouse, out on to the coloured shingle.

You must remember that Baldmoney and his brothers were (as far as I know) the last gnomes left in England. Rather surprisingly, he was extraordinarily like the pictures of gnomes in fairy books, even to the pointed skin hat and long beard. He wore a short coat and waistcoat of mouse-skin with a strip of snake-skin round his middle; moleskin breeches tied in below the knee, but no shoes or stockings. He had no need of these, for gnomes are hairy little folk; in summer time they sometimes dispense with clothes altogether. Their bodies are not naked like ours, but clothed in long hair, and as to their feet, if you had not worn boots or shoes since you were born, you would have no need of them either. He carried a hunting knife in his belt, made of hammered iron, part of an old hinge which he had found in the stream.

Bluebutton, the bluetit, flipped down, leaflike, to the lowest wand of the willow which projected a little way over the pool and watched the gnome with his beady eye.

‘Well, Bluebutton, it’s good to see you again; what sort of winter have you had?’

‘Not too bad, Baldmoney,’ replied the tit, hopping about among the soft willow buds.

Before I proceed I must tell you that of course the wild things did not talk to the gnomes in our language. They had one of their own which the gnomes understood. Naturally in this book I have made them talk in our language, otherwise you would not make head or tail of what they were saying.

Denys Watkins-Pitchford (1905–90), who wrote under the pseudonym ‘BB’, was the author of more than sixty books for adults and children, but The Little Grey Men, which won the 1942 Carnegie Medal, and its sequel Down the Bright Stream, published in 1948, are his masterpieces. BB was both a writer and illustrator, and his charming original illustrations decorate this book. But above all he was a countryman, whose intimate and unsentimental knowledge of animals, birds and plants, as well as his gifts as a storyteller, make these books unique.