Sometime in the late 1990s, when I was staying in Dublin with my sister Marie Heaney and her husband Seamus, he was working on the introduction to a book called A Way of Life, Like Any Other, which I took to be a novel. I’d never heard of it, but the fact that Seamus was writing an introduction to this new edition seemed like an honour and signalled importance. First published in 1977, it had won both the Guardian Fiction Prize and the American PEN/Hemingway Award. How had I missed it?

Seamus gave me some pages of his introduction to read and I remember being much taken by the author’s use of the word ‘cleanly’ in a passage about acting as a carer for his father:

I had been nearly two years caring for my father and had some reason to be pleased with my work. His habits were again cleanly, his house and its treasures were in order . . .

It was so simple, yet it marked him out as someone at home with what the poet Eavan Boland called ‘that most fabulous of beasts, language’. The book’s title originated in a flippant remark Seamus had once made in a Czech restaurant, which was seized upon by the author who – of course, of course! – happened to be there. The whole situation was somehow reminiscent of one of Flann O’Brien’s delicious literary excursions poking fun at pretension. And appropriately the author’s name was Darcy O’Brien, a moniker given him by Marguerite Churchill, his movie-star mother (a fabulously crazed, joyfully wicked, sexy creation, who didn’t want anyone to think her son was common Irish. Jaysus, no.)

On New Year’s Eve 2001, the worst snowstorm in England and Ireland for years closed nearly all the airports, but somehow one flight took off from Dublin to Bristol with Seamus and Marie on it. They made it to my house through the snowy Mendips where the rest of my family were waiting and hoping, and then through the hazardously high drifts to St Michael’s church in 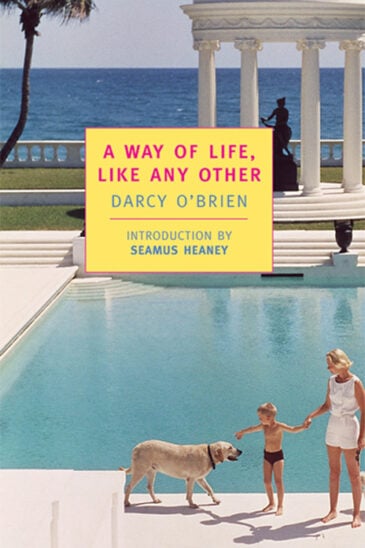 The artist Barrie Cooke had fishing in common with Ted Hughes, and mud and art in common with Seamus Heaney. Dr Mark Wormald, a scholar on the life and writings of Ted Hughes, has brought to light an extraordinary haul of poems, letters and drawings documenting a decades-long triangular friendship and a shared love of poetry and nature. He describes the spine-tingling discovery of Barrie’s cardboard box stuffed with correspondence and traces its history, starting with the first supper at Barrie’s Kilkenny home, and then at Jerpoint, also on the River Nore, where the trio forged their friendship, Seamus began Station Island and a poet’s haven flourished. From Ted’s dream of a burning fox man, climbing into Carrowkeel passage tombs and visits from Robert Lowell and Tom Paulin to fishing diaries, pike spoons and a stuffed trout, subsurface treasures are dredged up as our literary sifting takes us off the beaten track.