Autumn. Season of mists . . . Chudleigh the office dog is getting his winter coat and we’re thinking of turning on the heating. Traditionally autumn is also one of the busiest publishing seasons when firms launch their ‘big’ books in time for the Christmas market, and review pages and bookshop displays expand. The novelist Sarah Harrison (whose piece on Teresa de Kerpely appeared in Issue 26) feels all those reviews and publishers’ blurbs need some decoding. Her brief guide tickled us, so we thought we’d pass it on:

Enchanting: there’s a dog in it

Heart-warming: a dog and a child

Haunting: set in the past

From the pen of a master: same old same old

In the tradition of: shamelessly derivative

Pondering recently on how publishing has changed we came across an anecdote from our contributor Jeremy Lewis which is quoted in a hefty new history of twentieth-century publishing produced by the British Library. It seems that Norah Smallwood, the legendary Director of Chatto & Windus who was known for her editorial acumen, was heard to enquire during the 1970s of the Company Secretary, ‘Exactly what is a balance sheet?’ Those were the days. Now the balance sheet rules and every title has to pay its way in the short term, with the result that excellent books are often allowed to go out of print to make way for flashy new titles.

Talking of which – excellent books, that is – may we recommend Graham Greene’s wonderful memoir A Sort of Life (see p.12), the latest of the Slightly Foxed Editions, which takes him from childhood to the moment when he recklessly gives up his first Fleet Street job as a subeditor on The Times in order to be a writer. Growing up among a clan of Greenes in Berkhamsted, by the time he was out of his teens Graham had undergone psychoanalysis – unusual for the 1920s – fallen in love with the family governess, and become addicted to playing Russian roulette with his brother’s revolver. His was a life always lived ‘on the dangerous edge of things’ and this memoir is as gripping as any of his novels.

And finally, we thought you’d like to know that a Slightly Foxed book bag is now available. Intensive discussion has taken place around the office table as to the ideal design for a such a bag and we hope and believe we’ve come up with it – a Platonic book bag you might say. It’s made from smart, hard-wearing dark grey jute with Slightly Foxed and our little book-reading fox picked out in cream. Big enough to hold at least 5 or 6 books, it measures 30 x 30 x 20 cms and has handles long enough to fit over the shoulder, but not too long to carry in the hand. At £5 (plus £1.50 p&p in the UK, and £2.50 p&p overseas) it is, we feel, a bargain. 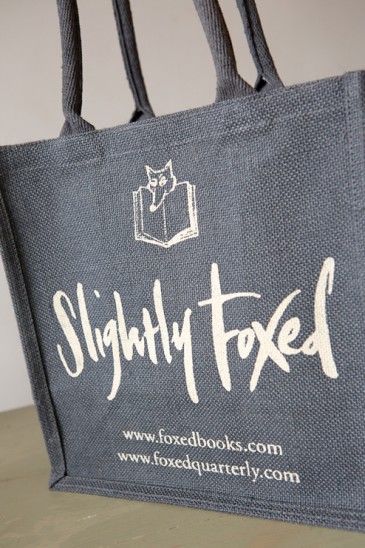