We’re now comfortably settled at our new home in Hoxton Square which, being a proper office rather than part of a flat, is far more spacious and functional than Brewhouse Yard. We do miss the spectacular view we had there of London’s domes and towers rising against the sky behind St Paul’s, but we’re enjoying the edgy inner city feel of Hoxton with its little specialist bookshops, vegetarian restaurants and bicycles chained to the railings among the plane trees and scruffy city pigeons. Thank you so much, all of you who sent us good wishes for the move and appreciative Christmas cards. We were extremely touched to receive them.

This year certainly feels like a busy one, with various dates already in the diary. On Saturday 23 March Gordon Bowker, biographer of Lawrence Durrell, George Orwell and James Joyce, will be speaking about another of his subjects, Malcolm Lowry (see p.45), as part of the Slightly Foxed series of talks on forgotten authors at the Oxford Literary Festival. Tickets from the Festival box office: 0870 343 1001.

On Wednesday 19 June we’ll be giving a ‘Tea with Slightly Foxed’ at the Simonsbath Festival on Exmoor to launch the summer issue. It’s a wonderful part of the world and the Festival looks like a very interesting and eclectic series of events, from a concert by an all-female trumpet quartet to an evening with Thomas Hardy (www.simonsbathfestival.co.uk). Likewise the Penzance Literary Festival – a charmingly friendly and informal festival in another beautiful place – where we’ll be talking about the experience of founding and editing Slightly Foxed and hosting tea again in July (www.penzance-literary-festival.org.uk).

We’ve also booked ourselves in at the Art Workers’ Guild in Bloomsbury again for our 2013 Readers’ Day which will be on Saturday 9 November. Those who come do seem to love it and tickets go fast, so if you’re interested let us know in good time. We do look forward to meeting some of you at these events – it’s one of the nicest parts of the job.

The latest of the Slightly Foxed Editions, out this spring, is Ysenda Maxtone Graham’s gripping biography of her grandmother, The Real Mrs Miniver (see p.12). Those of you who bought and loved her Mr Tibbits’s Catholic School will know what a sparky writer Ysenda is. In this book she plumbs the experience of another writer, an intriguing woman who found herself caught in a web of her own creation; it’s an absolute page-turner.

If you missed out on the Slightly Foxed Editions, two of our bestloved titles are now available as Slightly Foxed paperbacks: Priscilla Napier’s account of growing up in Egypt during the last golden years of the Edwardian Age, A Late Beginner, and Michael Jenkins’s A House in Flanders, his evocation of the magical summer he spent as a shy 14-year-old with ‘the aunts in Flanders’ – a formative experience he would never forget. And finally, our best wishes to you all for 2013, and congratulations to Brian Midgley, the winner of our 4th crossword competition, who receives a year’s free subscription. The answers appear at the bottom of p.95. 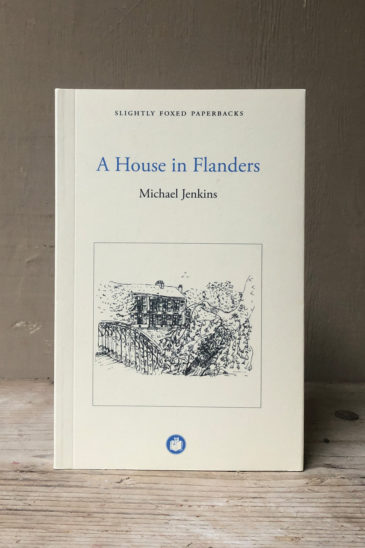