The trees are in full deep green leaf now, making a small oasis of Hoxton Square, while not fifty yards away the traffic roars past along Old Street. New regulations to cut down air pollution in London are on the way we learn, but now the fumes hang heavily in the summer air as we make for the office, dodging people coming in the other direction who seem to be talking to themselves but are actually on their mobile phones. As Jane Austen’s great hypochondriac Mr Woodhouse observes, ‘Nobody is healthy in London, nobody can be.’ For many of us these days it’s a hurrying, worrying world.

Here in the office however, against all the odds, we’re well and in excellent spirits – but how badly sometimes one feels the need to escape, if only in the imagination, to a place where the pace is slower, the view more tranquil and more concentrated – the kind of country world that still existed when Adrian Bell wrote The Cherry Tree, a book which transports you to another England, still recognizable yet remote.

This newest of the Slightly Foxed Editions is the third and last volume in a trilogy of lightly fictionalized memoirs in which Bell describes his experiences of leaving London in the decade after the First World War to work on a Suffolk farm. In the first two, Corduroy and Silver Ley (see SF nos. 22 and 46) he learns farming on a well-established family farm near Bury St Edmunds and acquires a small farm of his own; in The Cherry Tree (see p.14) he marries and settles down to sit out the agricultural depression of the late Twenties and Thirties as best he can. The books are a wonderfully poetic and detailed record of a time in the countryside before mechanization took over completely and when many of the old crafts and their colourful practitioners still survived. They are books that have been loved since they were first published in the 1930s, and they still resonate today.

On the subject of books with lasting qualities, on p.42 you’ll find an interview with the prize-winning novelist and playwright Ali Smith. Maggie Fergusson went to Cambridge to meet her and talk about the way she approaches her work and deals with the many demands which are made on successful writers in this media age. It’s the first in a new occasional series on living authors who are still writing and who have a considerable body of work behind them which we feel will last. We hope you’ll enjoy it and welcome any suggestions you may have for additions to the series.

For anyone with a busy life, or indeed an inner life, a good notebook, we feel, is essential – a place for lifesaving lists, memorable quotes and titles of interesting books you’ve read about, a repository for Great Thoughts and acute passing observations for that novel you plan. Many of you clearly agree, for our Slightly Foxed notebooks, which we introduced a couple of years ago at the suggestion of our contributor James Roose-Evans, have shot off the shelves. We have a new batch in now in a different range of colours: a smart charcoal, a fresh apple green and a distinguished maroon, as well as our signature duck-egg blue. Bound in coloured cloth with contrasting endpapers, silk head- and tailband and ribbon marker, they come in two sizes, one identical to the Slightly Foxed Editions and one the same size as the quarterly itself. The good-quality paper is unruled, so they can serve equally well as both notebooks and sketchbooks. Perfect for taking on holiday.

And finally, as always we’re enjoying planning our annual Readers’ Day at the Art Workers’ Guild in Bloomsbury, which this year is on Saturday, 4 November. See you there we hope. 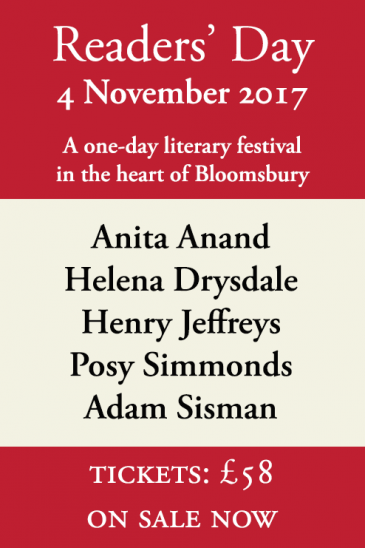