We were fortunate, those of us who grew up in the 1980s. Almost every year there would be a new book by Roald Dahl which would be passed around at school and discussed with great seriousness. There were also playground arguments about his name: ‘It’s not Ronald, it’s Roald! Don’t you know anything?’

We lived in Dahl’s world, my brother and I more literally than most children since we grew up a couple of miles from Gypsy House, his home in Great Missenden. As we drove past it my parents would always say: ‘That’s where Roald Dahl lives.’ I think I used to doubt them. Could Dahl really live somewhere as prosaic as an ordinary house in rural Buckinghamshire? I liked to think he lived in a Willy Wonka-style factory turning out madcap books with the help of oompa loompas. I met him once at a charity event; he was sitting at a table looking very old and signing books.

When Boy, Dahl’s memoir of his schooldays, was published in 1984 (see SF no. 63), it had a powerful effect on my class. It felt as if he was talking to us directly. When the sequel, Going Solo, appeared in 1986, I took it out of the school library and read it cover to cover in one sitting. Going Solo picks up where Boy left off, in 1936 with Dahl now an adult, sailing to East Africa to work for Shell.

The first thing that struck me when I reread it all these years later was how very like his stories his own life was. On the long voyage to Africa, the elderly couple who run around the boat naked or the man who pretends to have dandruff so nobody will suspect that he wears a wig seem to have stepped from the pages of Dahl’s children’s books. One can picture them drawn by Quentin Blake. The animals too: he describes elephants, ‘their skin hung loose over their bodies like suits they had inherited from larger ancestors, with the trousers ridiculously baggy’, while vultures are ‘feathered undertakers’.

Later in the book, there’s an incident with a rogue lion: ‘Come quick! Come quick! A huge lion is eating the wife of the cook!’ The mixture of the comic and the tragic reminded me of the beginning of James and the Giant Peach where James’s parents are killed by a rhinoceros which has escaped from London Zoo.

If these incidents feel as if they’ve sprung from Dahl’s imagination it’s probably because they had. Going Solo is largely based on long letters that Dahl wrote to his adored mother, Sofie Magdalene, in England. Dahl’s biographer, Donald Sturrock, thought that ‘Most of these delightful characters were almost certainly invented as an entertaining alternative to his real companions on the journey who were dismissed in a letter home as “pretty dull”.’

So Going Solo is not a memoir in any conventional sense of the word. Just as in Boy, it is Dahl telling stories loosely based on his life for the benefit of children. The Dahl of Going Solo is a curious Peter Pan-like figure experiencing adult adventures without growing up properly. Apart from a hint of romance when he is in hospital in Alexandria after a plane crash, there is no hint of sex in the book, which is just how we liked it. Dahl’s great gift was that he related to children better than to adults. A friend of my parents knew him and told me that though he could be difficult with adults, he always had time for their daughter and used to make up elaborate nicknames for her. We loved Dahl because he shared our impatience and confusion with the adult world. In Going Solo, the adults are the British. Despite being born and raised in Wales and England, Dahl was an outsider. He spoke Norwegian at home and only got his first British passport when he went abroad with Shell. Here is Dahl the anthropologist:

In the 1930s, the British Empire was still very much the British Empire, and the men and women who kept it going were a race of people that most of you have never encountered and now you never will. I consider myself very lucky to have caught a glimpse of this rare species while it still roamed the forests and foothills of the earth.

In Africa his closest relationship is with his manservant Mdisho, whose boyishness (he was 19) is contrasted with the stuffiness of the British. When war breaks out, Mdisho, full of martial enthusiasm, beheads a German sisal owner, ‘a very wealthy and extremely unpleasant bachelor’, with Dahl’s antique sword. Again, this incident almost certainly never happened. Mdisho exists not as a caricature of Africans but as the child in the book baffled by adult ways. And as always with Dahl, death and violence are dealt with unsentimentally.

Later, Dahl’s confusion with the British turned into contempt for his senior officers and the general amateurishness of the war effort. ‘This, I told myself, is a waste of manpower and machinery,’ he writes at one point on the token British fighter presence in Greece. Despite being 6 ft 6 in, he trained as a fighter pilot. We are on slightly firmer ground with the RAF years. There are no doubt embellishments here and there but much of what he wrote can be corroborated. Dahl was a superb pilot; he passed third out of 40 in his intake, and in his brief career had a number
of confirmed kills. His descriptions of an air battle in his Hurricane is mesmerizing: ‘I was quite literally overwhelmed by the feeling that I had been into the very bowels of the fiery furnace and had managed to claw my way out.’

This love of flying recurs throughout Dahl’s work. It’s there in James and the Giant Peach or Charlie and the Chocolate Factory. Indeed, Dahl’s first foray into writing was an account of his crash in the Libyan desert early in his RAF career. It’s a story he told many times. In some versions he is shot down, but in Going Solo he is given the wrong co-ordinates of the base he is making for in North Africa and, with night closing in and running out of fuel, he is forced to make a crash landing in the desert.

What is certain is that he suffered severe head and back injuries and was very nearly killed. In Going Solo he writes of undergoing ‘sixteen major operations on numerous parts of my body’ and spending four months convalescing in hospital in Alexandria. He did fly again but suffered from severe back pain for the rest of his life. He thought, however, that the crash also changed him mentally and made him a writer.

Dahl first began writing short stories for adults that were extremely popular in America and it was only in 1961 that he wrote James and the Giant Peach. In his lifetime, his children’s books were hated by some librarians, but Dahl knew his audience: ‘a grown-up talking about a children’s book is like a man talking about a woman’s hat’.

Going Solo appeared towards the end of an extraordinarily fertile patch in his career when, with the support of his second wife, Felicity Crosland, and a collaborative editor at Farrar, Straus and Giroux, Stephen Roxburgh, he wrote classics like The BFG and Matilda, with vivid illustrations by Quentin Blake.

Roald Dahl died in 1990. Since then his personal reputation has taken a bit of a battering. He clearly had a temper and could be extremely unpleasant. And yet, for me, that doesn’t dent the magic of the books. Rereading Going Solo, I was struck by his powers as a storyteller: humour, economy, a vivid eye for detail, and that uncanny ability to talk directly to his reader. One of my happiest moments was hearing my daughter’s fits of giggles the first time I read her The BFG.

My parents still live near Great Missenden. One day a couple of years ago, my daughter was feeding the ducks behind the Red Lion, not far from Gypsy House (which is now a museum), when she made friends with two girls who were doing the same. Their mother looked strangely familiar. It was Sophie Dahl, the inspiration for The BFG, and those little girls were Roald Dahl’s great-grandchildren. The girls and the ducks took on a Quentin Blake-like quality, and Roald Dahl’s presence suddenly felt palpable.

Henry Jeffreys is a drinks writer based in south London. One day he will return to rural Buckinghamshire and prop up the bar at the Red Lion but not quite yet. 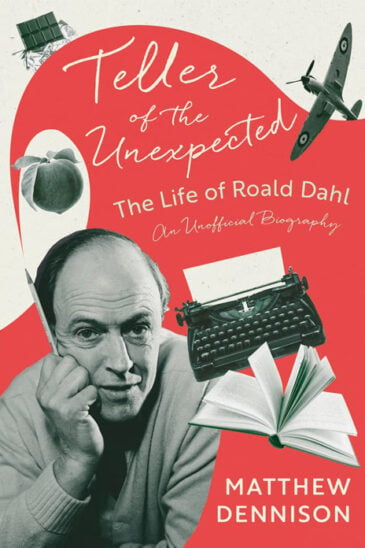