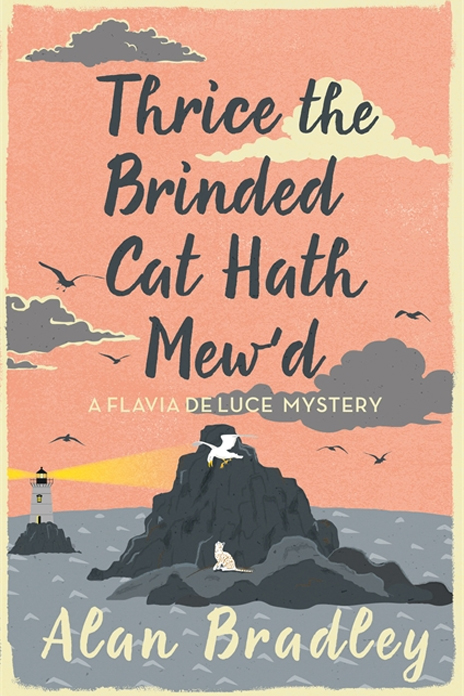 The eighth title in Alan Bradley’s series of historical mysteries featuring Flavia de Luce. Each mystery can be read in series order or as a standalone novel.

Twelve-year-old Flavia de Luce is back at Buckshaw at last, but her homecoming is overshadowed by news of her father’s illness.

Forbidden from visiting Colonel de Luce in hospital, Flavia busies herself in the village, but she soon makes a macabre discover: the corpse of a reclusive woodcarver hanging upside down on the back of a door, in a house empty but for a curiously uncurious cat.

While the local constabulary are stumped, Flavia is soon piecing together a puzzle that connects a death by murderous gulls on a desolate island, a local woman said to be a witch, and a beloved children’s author who terrified his own son.

Raymond Chandler was not a great fan of the ‘cosy’ crime novel. In a famous essay of 1950 called ‘The Simple Art of Murder’, the novelist satirized the intricate, ingenious and implausible plots of the great English detective writers and scoffed at their emphasis upon the perfect puzzle, rather than the reality of human action. Not for him solutions that hinged on the potting of prize-winning begonias or the carefully calibrated murder with a platinum stiletto. In his view, crime writing only really came of age with Dashiell Hammett and the fast-talking, hard-punching heroes of a new American tradition, of which Chandler himself is perhaps now the best-known exponent. In view of this, I sometimes wonder what Raymond Chandler would have made of Alan Bradley and his pugnacious heroine Flavia de Luce.

On the face of it, crimes don’t get much cosier than those which appear in the first six novels of the Flavia sequence. The convention of Slightly Foxed dictates that titles are normally tucked away in a footnote, but I think it is worth savouring the delightful cadence of all six here: The Sweetness at the Bottom of the Pie; The Weed that Strings the Hangman’s Bag; A Red Herring without Mustard; I Am Half-Sick of Shadows; Speaking from among the Bones and The Dead in Their Vaulted Arches. To me, each of these seems to have exactly the right balance of whimsy and menace, and these are promises that are admirably fulfilled in the books that follow . . .


Not So Cosy After All?