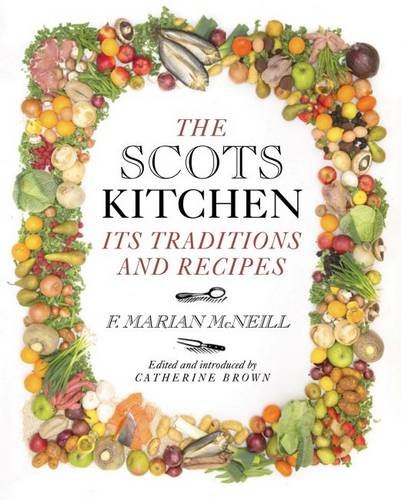 This is the first new edition of The Scots Kitchen for over thirty years. Beautifully laid out with charming line illustrations, it’s introduced by the cookery writer and broadcaster Catherine Brown.

Notes explain how to use the book so that its treasure trove of recipes can be explored in the modern kitchen. As well as being a practical guide to all aspects of Scottish cooking, this is a book to be read for pleasure, to refer to and to savour.

Food is an expression of a culture, a reminder of your roots. I inherited a battered copy of Glasgow Cookery, peppered with my granny’s authoritative biro. It transports me to a simpler time. Liver and bacon every Wednesday, cod in lumpy sauce on Fridays. She scalded and plucked chickens. I’ll never forget the smell of the feathers. She was what’s called a good plain cook – lots of pancakes, jammy scones and barley thickened soups. But it would never have occurred to her that the way she cooked – using every last bit of an animal, turning hard bread into puddings – was interesting in itself, or that it could teach anyone about what it meant to be Scottish. For that insight we are indebted to a remarkable Orcadian woman . . .

Florence Marian McNeill, known as Floss, understood the importance of regional dishes. You may know her better as a folklorist; but without The Scots Kitchen, first published in 1929, she’d never...