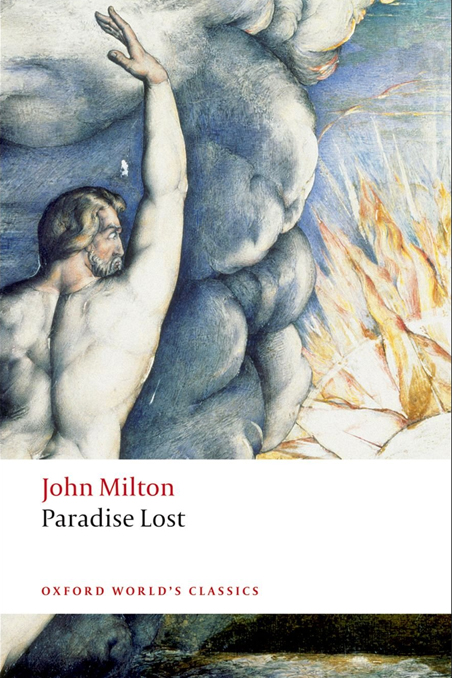 In 1667 John Milton wrote an epic poem that would ‘justify the ways of God to men’. While the struggle for ascendancy between God and Satan is played out across hell, heaven and earth in the work, the consequences of the Fall are all too humanly tragic, with pride, ambition and aspiration being the motivating forces. In this edition, Editors Jonathan Goldberg and Stephen Orgel discuss the complexity of Paradise Lost in a new introduction.

For those who don’t know: the story of the poem is that of the creation of the universe, the rebellion against God by Satan and his fellow fallen angels, followed by the Genesis account of the Fall of Man after Adam and Eve are tempted by the serpent (Satan in disguise) to disobey God by eating the fruit of the forbidden tree, popularly an apple, and are evicted from the Garden of Eden and condemned to a life of hard labour (Adam) and childbearing (Eve). The poem acknowledges therefore the triumph of evil and the loss of innocence, the curse of work followed by the curse of death, all of us now doomed to return to the dust from whence we came.

Naturally Satan will be punished and humanity redeemed – if it chooses to be – but the ending of the poem stays intractably true to the title: Adam and Eve are unparadised; they are now refugees, and are turned out naked into the world. And yet – Milton may not have been the first to say it but he said it more movingly than anyone else – they have each other. And it was that picture of the disconsolate couple, evicted from their home, scantily clad and facing an unknown future, but still together, which all those years ago touched something in my infant mind . . .