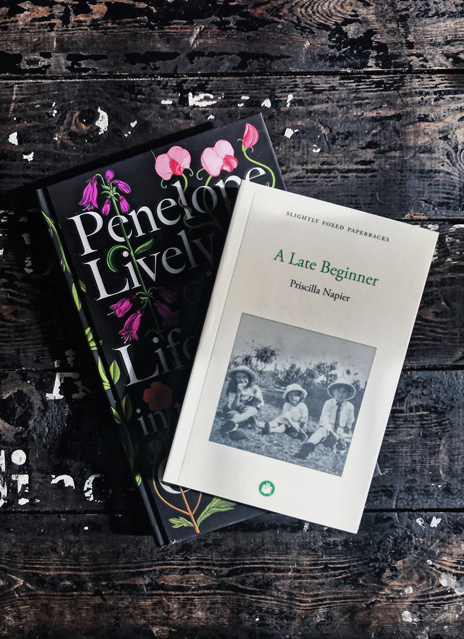 Penelope Lively, Life in the Garden

This book is partly a memoir of Penelope Lively’s life in gardens. The large garden at home in Cairo where she spent most of her childhood, her grandmother’s garden in a sloping Somerset field, then two successive Oxfordshire gardens of her own, and the smaller urban garden in the North London home she lives in today.

It is also a wise, engaging and far-ranging exploration of gardens in literature, from Paradise Lost to Alice in Wonderland, and of writers and their gardens, from Virginia Woolf to Philip Larkin.

Priscilla Napier grew up in Egypt during the last golden years of the Edwardian Age – a time when, for her parents’ generation, it seemed the sun would never set upon ‘the regimental band playing selections from HMS Pinafore under the banyan tree’.

In A Late Beginner she recalls that childhood and those last fleeting years of the British Protectorate. Her father, Sir William Hayter, a clever, hard-working man with enlightened views, was legal and financial advisor to the Egyptian Government. Her brother William would later become British Ambassador in Moscow, her sister Alethea a distinguished writer, and Priscilla herself would marry and lose her husband in the Second World War. But here she is a high-spirited little girl, William a knickerbockered schoolboy and Alethea a muslin-clad toddler. Priscilla brings vividly to life that far-off world – the house and its devoted Egyptian servants, the desert picnics with Nanny, the visits to Cairo Zoo, the afternoons spent rampaging with other children in the grounds of the Gezira Sporting Club. And the long summers in England when Lady Hayter took the children to join her sisters and their families in Sidmouth – a different scene altogether, especially as the First World War began to take its tragic toll of uncles and cousins.

Priscilla Napier was a born writer, and A Late Beginner is a wonderful evocation not only of a place, a time and a climate of mind, but also of the child’s eye view. It ranks, says Penelope Lively in her introduction, ‘quite simply with the greatest accounts of how it is to be a child’.


Before the Sun Set