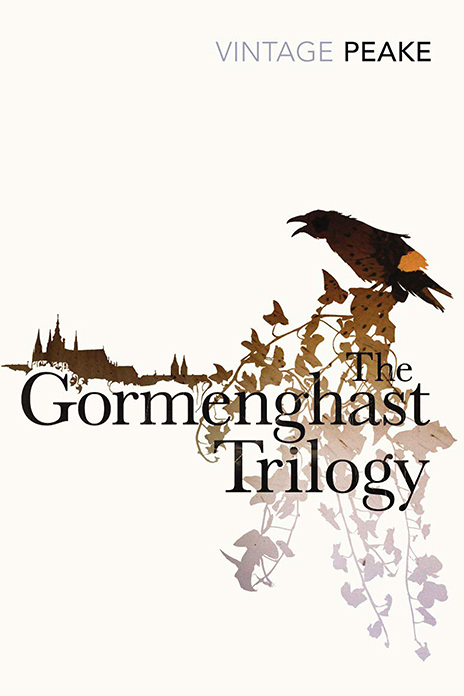 Mervyn Peake’s Gormenghast is the vast, crumbling castle to which the seventy-seventh Earl, Titus Groan, is lord and heir. Titus is expected to rule this gothic labyrinth of turrets and dungeons (and his eccentric and wayward subjects) according to strict age-old rituals. But things are changing in the castle, and Titus must contend with treachery, manipulation and murder as well as his own longing for a life beyond the castle walls.

As the first novel, Titus Groan, opens, Titus has just been born: he stands to inherit the miles of rambling stone and mortar that stand for Gormenghast Castle. Inside, all events are predetermined by a complex ritual, lost in history, understood only by Sourdust, Lord of the Library. Gormenghast follows Titus from 7 to 17, growing up in a cobwebbed kingdom of Byzantine government and age-old rituals, a world primed to implode beneath the weight of centuries of intrigue, treachery, manipulation and murder. In the final part of the trilogy, Titus Alone, Titus, now almost twenty, escapes from the oppression of the Castle, but becomes lost in a sandstorm and is stranded in a big, bustling city. No one there having heard of Gormenghast, the general consensus is that the boy is deranged but some believe his story, or at least who are intrigued by it, and try to help him. Titus longs for his home to prove, if only to himself, that Gormenghast is truly real.

‘[The Gormenghast Trilogy] is one of the most important works of the imagination to come out of the age that also produced The Four Quartets, The Unquiet Grave, Brideshead Revisited, The Loved One, Animal Farm and Nineteen Eighty-Four.’ Anthony Burgess

Barnaby Rogerson on the Gormenghast novels of Mervyn Peake

For a young adult setting out into the world, however, leaving behind either college or close-knit community, I would instinctively choose Mervyn Peake. Not any Peake, mind; it has to be Titus Groan...