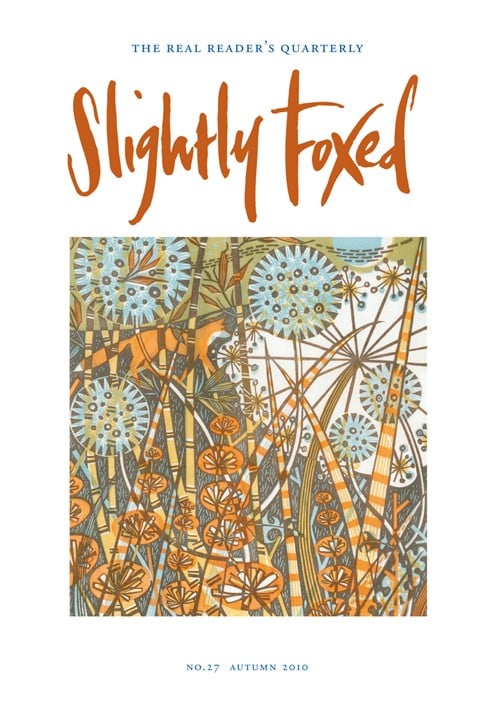 Erskine Childers, The Riddle of the Sands

Graham Greene, A Sort of Life

Lives on the Edge • FRANK HERRMANN

The short stories and novels of H. A. Manhood

Hans Zinsser, Rats, Lice and History; As I Remember Him

Down in the Mayfair Badlands • D. J. TAYLOR

The novels of Wallace Breem

Henry Thoreau, Walden, or Life in the Woods

If at First • JAMES BARTHOLOMEW

P. G. Wodehouse, The Clicking of Cuthbert; Heart of a Goof

Not so Merry England • ALEXANDER LUCIE-SMITH

A Season in Purgatory • TRILBY KENT

Geoffrey Pyke, To Ruhleben – And Back: A Great Adventure in Three Phases

The Oldest Paper in the World • FRANCES WOOD


Slightly Foxed Issue 26: From the Editors

Our bookshop is truly up and running now under its new banner ‘Slightly Foxed on Gloucester Road’. Renovations have been modest – fresh paint, new carpet, some moveable shelving to allow us to...

The Oldest Paper in the World

Frances Wood on The Diamond Sutra

It is not surprising that having invented paper over 2,000 years ago, the Chinese found a wide variety of ways to use it. Though the seventeenth-century landscape artist and arbiter of taste, Wen...

Jim Ring on Erskine Childers, Riddle of the Sands

In the depths of last winter the bathroom, if by no means warm, was the least glacial room in the house. Ever since the children were born it’s also been the only place in our North Norfolk home in...

Frances Donnelly on Graham Greene, A Sort of Life

‘I have tried, however unsuccessfully, to live again the follies and sentimentalities and exaggerations of the distant time, and to feel them, as I felt them then, without irony,’ wrote Graham...

Lives on the Edge

Frank Herrmann on the short stories and novels of H. A. Manhood

One of the great advantages of running an auction house for books is that you see a vast range of publications. And if you’ve been a publisher for many years before you became an auctioneer, you...

Some years ago I found myself acting as Her Majesty’s Permanent Representative to the Economic and Social Commission for Asia-Pacific (ESCAP), a United Nations talking-shop based in Bangkok. There...

A Sensual but Secret World

I came across the book quite by chance one bitterly cold February day in the early Eighties, in a junk shop in the Brontë village of Haworth. It was a tatty copy of The Drums of Morning by Rupert...

It was on just such a holiday that I came to read Ivy Compton- Burnett’s Pastors and Masters and Malcolm Bradbury’s The History Man in quick succession. And since one is the predecessor of the...

Richard Platt on Hans Zinsser, Rats, Lice and History and As I Remember Him

Hans Zinsser is stalking a murderer. His quarry has terrified hapless victims for centuries, coming upon them suddenly, by stealth, with overwhelming power and agility, sending whole cities into...

Down in the Mayfair Badlands

In strict taxonomic terms, Roger Longrigg’s long career – he published novels for over half his seven decades on the planet – looks like a throw-back, a reversion to the high-output conditions...

Long ago, as a student, I was told to read the letters of Madame de Sévigné to get a better understanding of seventeenth-century French history. Now that exams are far behind me, I wonder how many...

On the North West Frontier

Bruce Coward on the novels of Wallace Breem

Wallace Breem is one of those authors who, if he is remembered at all, is probably known only for his first novel, Eagle in the Snow, which received high praise and achieved excellent sales on its...

Robert Loraine was a magnificent man in a flying machine. I first encountered his story in an Anglesey meadow where he had two of his many crashes. Soon afterwards I chanced on a biography of him in...

Roger Jones on Henry Thoreau, Walden, or Life in the Woods

In 1973, my wife and I left a flat in St John’s Wood for a decrepit 5-acre smallholding in West Wales. There we continued, in cheerful penury, for the next twelve years. ‘Back in the days’, as...

A friend recently urged me to read Frank Kermode’s memoir Not Entitled – not for the account of a supremely successful academic career in the second half of the twentieth century, nor for...

James Bartholomew on P. G. Wodehouse, The Clicking of Cuthbert and Heart of a Goof

A few years ago I was still managing to keep my mother – elderly and frail – living in her own home, which was what she wanted. But she had a collection of medical problems any one of which could...

Not so Merry England

Ivanhoe is the one novel by Sir Walter Scott that needs to be discovered twice – if, that is, you first encountered it at school, as I did. To me then the plot seemed overcomplicated, and the whole...

A Season in Purgatory

Trilby Kent on Geoffrey Pyke, To Ruhleben – And Back: A Great Adventure in Three Phases

It seemed as good a time as any to tackle what remained of my stack of Christmas books, and so, bundled in an unlikely assortment of layers, complete with babushka headscarf and mitts, I reached for...

The Riddle of the Sands