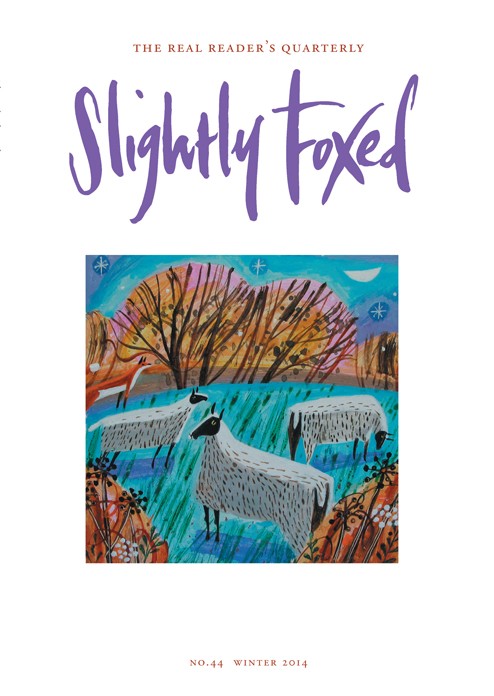 Gerald Durrell, My Family and Other Animals

The Importance of Being Decent • MATTHEW ADAMS

A Salute to Betjeman • RANJIT BOLT

Pastures of the Sky • LINDA LEATHERBARROW

Far from a Fling • ROGER HUDSON

Snow in the Quad • DAVID WEMYSS

The Mouse that Roared • BELINDA HOLLYER

Inside the Inside Man • MATT HUBER

John Gunther, The Inside books

All in the Mind? • SARAH CROWDEN


Slightly Foxed Issue 44: From the Editors

Another year almost gone. The lights are going on early now in Hoxton Square, and on misty evenings there’s a sense of a ghostly earlier London hovering just out of reach, while only a few hundred...

‘I’m mad about Ysenda Maxtone Graham’s piece in the new issue. Made me laugh out loud. I was a Malory Towers reader and never discovered Angela Brazil. I may have to seek her out for something...

O’Brian’s mastery of language is most wonderful of all. He manages to capture that mixture of toughness and grace which, for me at least, makes formal eighteenth-century English so attractive....

Simon Barnes, Preface to Gerald Durrell, My Family & Other Animals

Every paradise is lost. That’s kind of the point. Loss is the diagnostic feature of every paradise ever lived or imagined. But for five miraculous years and 120,000 miraculous words Gerald...

My Grandfather and Mr Standfast

In the hope that there might be other, more nuanced narratives, I have set myself the goal of reading widely about the war: recent histories, of course, but also those books written during it or soon...

Anthony Wells on The Encyclopaedia Britannica

One day in the late 1980s I had a call from my Aunt Freda. It came completely out of the blue, for although Freda had been my favourite godmother throughout my childhood, I had hardly exchanged a...

I hardly need tell you that ‘Brazil’ is supposed to be pronounced ‘Brazzle’, although I still find it hard not to pronounce it as it looks. Unmarried, childless, but busy and fulfilled,...

The Importance of Being Decent

In January 1939, as Europe was convulsing to the rhythms of what George Orwell would call ‘the tom-tom beat of a latter-day tribalism’, W. H. Auden, Christopher Isherwood and E. M. Forster were...

The Eustace and Hilda trilogy is a comedy of manners, an illustration of how the middle classes are lost in the upper-class world of great houses and Venetian palazzi, and puzzled by men called Dick...

Richard Platt on Christopher Booker, The Seven Basic Plots: Why We Tell Stories

Booker has that peculiar genius which connects commonplaces that we would never have connected for ourselves, makes observations that, only when once made, are self-evident, and asks questions we...

A Salute to Betjeman

On Hampstead Heath a leisured stroll To calm the mind and soothe the soul – North London’s take on Flatford Mill – The air is thick with heat, and still, The sunshine gilds the two...

Pastures of the Sky

I was 16 when I first read Breakfast at Tiffany’s, but because this is a novella that begins with an ending, full of uncertainties and possibilities, I soon realized that this was a complex...

Far From a Fling

Rodger Hudson on Elizabeth Grant, Memoirs of a Highland Lady

The shelves of John Murray seemed filled with books by its strong-minded, often indomitable women writers when I went to work there in 1972: Jane Austen, Queen Victoria, travellers like Isabella...

Snow in the Quad

I began reading C. P. Snow’s ‘Strangers and Brothers’ series of novels in 1980. I had just started my first serious job in local government and, although I didn’t know it, I was about to live...

The Mouse that Roared

When I was 9 and at primary school in New Zealand, my class teacher was a poet called Kendrick Smithyman. He was a rather bad-tempered curmudgeon but he had an overwhelming advantage over any other...

Inside the Inside Man

Matt Huber on John Gunther, the Inside books

Inside Europe, Inside USA, Inside Russia . . . if journalism is the first draft of history, John Gunther’s journalistic documentary works are indisputably dated – his last, Inside Australia, had...

The amazing thing about Nero Wolfe, hero of Rex Stout’s Fer-de-Lance, was that he lived in a house with its own elevator. I was 14 when I first read the book. I was spending the school holidays...

All in the Mind?

I have long wanted to offer an update on the latest additions to the Crowden Archive. Some subscribers may recall the first piece on the subject, ‘Something for the Weekend’ in Slightly Foxed No....