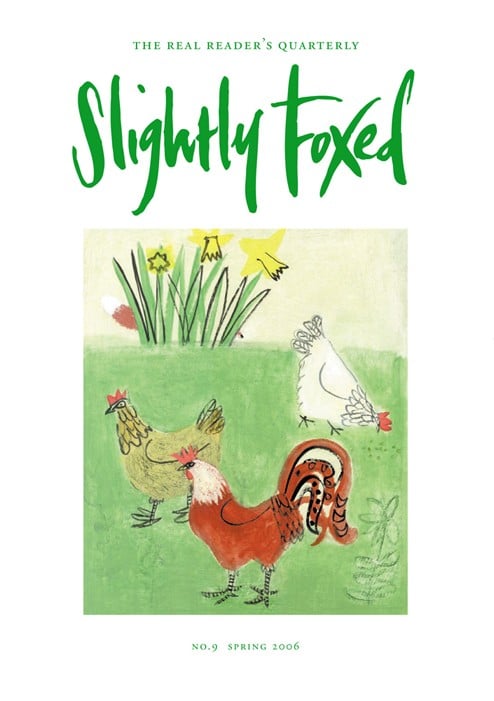 Blame It on Matron • CHRISTIAN TYLER

Norman F. Dixon, On the Psychology of Military Incompetence

On reading the plays of William Shakespeare

On the wood engravings of Gwen Raverat

Percy FitzPatrick, Jock of the Bushveld

In Search of Shangri-La • JOHN HAMMOND

Edit and Be Damned • CHARLES ELLIOTT

‘There is a nostalgic – dare one say almost whimsical – quality to Slightly Foxed which is both appealing and quietly stimulating … At times there is also ‘something of the night’ about it but in this case the sort of black night when there is no greater pleasure than pulling the curtains against the cold, driven rain and lighting the fire’ W. M. Millar, North Berwick


Slightly Foxed Issue 9: From the Editors

When we mentioned last year that we were moving to a new office, with spectacular views over St Paul’s, we’re not sure what image this will have conjured up. One of those atmospheric,...

The immediate framework of the story is the relationship between the Smalleys and Mrs Bhoolaboy, tenants and landlady respectively, as they struggle to achieve very different aims: the Smalleys to...

Blame It on Matron

Christian Tyler on Norman F. Dixon, On the Psychology of Military Incompetence

Usually, when I discover a second-hand bookshop, I confine my browsing to one or two familiar categories. Military history is not one of them, nor is psychology. So it was by sheer fluke that I...

Like Flannery O’Connor, I was born in Georgia. I used to have a thick Southern accent, until my momma hired a British nanny to wallop it out of me; Momma reckons that’s why I live in London now....

Reading the Play’s the Thing

Christopher Rush on reading the plays of William Shakespeare

I want to ask you a question: how long is it since you actually sat down and read a Shakespeare play, for the sheer pleasure of it, as you would read a novel, for example, or a volume of verse? How...

Peter Broad on Simon Sebag Montefiore, My Affair with Stalin

For those who have travelled the English boarding-school route, similar prep-school memories are sure to be jogged by reading Simon Sebag Montefiore’s My Affair with Stalin, a wonderfully...

I defy anyone to read Fitzroy Maclean’s Eastern Approaches and not want to go to mysterious Central Asia. From the moment I read those seductive first paragraphs as a student, I was drawn to the...

Artist of Earth and Sky

Simon Brett on the wood engravings of Gwen Raverat

Despite the aspirations Gwen Raverat expressed in her classic childhood memoir Period Piece (‘O happy Mrs Bewick!’ she declares at one point) and all the drawings in the book, many of its...

Robinson Crusoe is a simple stereotype; he is you and me forced back on to our own resources. He was inspired by the true adventures of the Scottish sailor Alexander Selkirk, an able but short-fused...

Putting the Story into History

The year 1905 was not the zenith of the British Empire in territorial terms (surprisingly perhaps, that was 1947, before Indian independence), but imperial confidence was about as high then as it...

Edit and Be Damned

Editing must be one of the few professions that require no professional training. Even a plumber needs to learn how to plumb before he’s allowed to attack pipes. An editor, on the other hand, just...

Caroline Chapman on Percy FitzPatrick, Jock of the Bushveld

As the years advance I’ve become increasingly aware of the books I read as a child that have exerted an influence on my life. Would I have just returned from my fourth tramp through the African...

Vansittart's great achievement is to take us into the completely different way of thinking of the men and women of those times; their superstitions and certainties, their rituals and fetishes and...

Preoccupied with the ‘Phoney War’, from declaration to the fall of France, or what Waugh described as the ‘Great Bore War’, Put Out More Flags was his sixth novel, and although it was a great...

In Search of Shangri-La

I first discovered James Hilton’s Lost Horizon as an adolescent, when I came across a hardback copy in a secondhand bookshop marked at one shilling and ninepence (8p in today’s money). It was...