‘Slightly Foxed is a handsome handful of thick creaminess, always with lovely covers, and would make a great present for someone who likes books. It’s rather like that voice you always hope to hear behind you in old bookshops . . . “Ah now that’s an interesting one”.’ – Independent

Our readers often tell us they can hardly wait for the next issue of Slightly Foxed – the only literary magazine that introduces them to good books from both the past and the present.

Companionable and unstuffy, Slightly Foxed is more like a well-read friend than a literary magazine. Each quarter it offers 96 pages of lively personal recommendations for books of lasting interest – books, including fiction, non-fiction and poetry, that have stood the test of time and have left their mark on the people who write about them. It’s an eclectic mix, and our contributors are an eclectic bunch too. In recent and forthcoming issues: 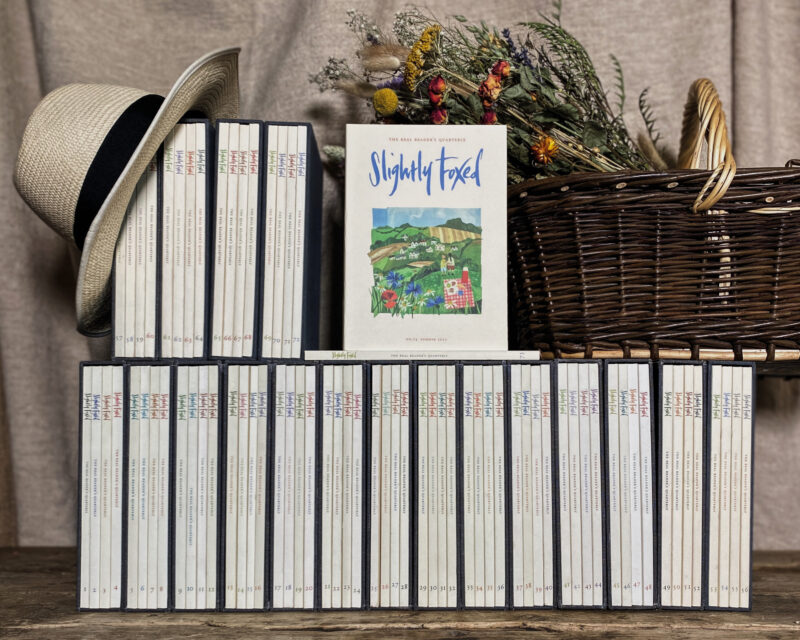 Our readers enjoy the way Slightly Foxed opens up unexpected new horizons and they love the way it looks and feels – delightfully illustrated and printed on elegant cream paper. They love our beautifully produced series of classic memoirs and children’s books that have been allowed to slip out of print too. So whether you’re in search of stimulation, consolation or diversion, a treat for yourself or a present for a bookish friend or relative, then why not try an issue of Slightly Foxed or take out a subscription for yourself or as a gift for a bookish friend? If you love books as much as our regular readers do, you’ll be in excellent company.

More than just a literary magazine . . .

Slightly Foxed also brings back forgotten voices through its Slightly Foxed and Plain Foxed Editions, a series of beautifully produced little pocket hardback reissues of classic memoirs, all of them absorbing and highly individual. For younger bookworms – and nostalgic older ones too – there’s the Slightly Foxed Cubs series, in which we’ve reissued Rosemary Sutcliff’s Roman and post-Roman novels, classic nature novels by BB and a number of Ronald Welch’s outstanding series of historical novels, in a handsome format with the original illustrations.

Whether you’re in search of a present for a bookish friend or relative, or a treat for yourself, Slightly Foxed offers a carefully chosen range of book-related merchandise, including cloth-bound notebooks, sturdy and good-looking bags, a beautifully crafted revolving bookcase and handy bookplates featuring a woodcut by Clare Curtis.

A subscription to the magazine also brings with it various benefits such as reduced membership fees for a number of literary clubs and organizations, such as the RSL, Gladstone’s Library and The London Library, discounts at various independent bookshops around the country and reduced rates on all books, back issues and merchandise produced by Slightly Foxed and all other books stocked in our online bookshop too.

This morning I went with Michael and Esther Wright to Mena where we met Freya Stark, Sir Walter Monckton and some more. We mounted donkeys and set off with a picnic lunch for Sakara. My donkey was called Telephone and trotted along well, but some of the others were less amiable and progressed by fits and starts. Freya Stark, dressed in a hideous sporting jacket, spun on her own mills in Italy, and snake gaiters topped by a large double-brimmed felt hat, was a sight for the gods, and her running com­mentary to her donkey made Walter Monckton laugh so much he nearly fell off his mount.

This evening I went to the Scottish Hospital to visit the wound­ed. It was tragically full. I found it difficult not to flinch at some of the sights and had to struggle to appear cheerful and smiling. I heard tonight we have taken Sollum. Japan has declared war on the Dutch East Indies.