The king was expected, on his way back from hunting . . . Everything along his route breathed expectancy. All the teahouses had been swept, tables laden with pears had been set up in the courtyards, and places set on white linen scattered with vanilla orchids. Squatting behind steaming teapots, the tenants scrunched up their toes inside their slippers, looking out at the dust of the royal convoy . . . [escorted by] a few men on horseback, carbines slung across their chests and lances fixed in their stirrups . . .

Which century are we in? Which country? Nicolas Bouvier’s vignette in The Way of the World won’t puzzle those of us (a rapidly dwindling cohort) who can remember Afghanistan during the reign of King Mohammad Zahir. And Nicolas’s response to the people and landscapes of that sternly beautiful country – undeveloped in the mid-twentieth century, but neither impoverished nor blood-soaked – made this reader’s heart ache.

In June 1953 the 23-year-old Nicolas left his Geneva home to motor to India (or beyond?). His artist friend Thierry Vernet was awaiting him in Belgrade and there is a picaresque whiff about the pair’s survival mechanism. Optimistically they relied for funding on their considerable talents – gambled on them, having no guarantee that anyone would want to buy Thierry’s sketches or listen to Nicolas’s lectures on French literature. The gamble succeeded, their personalities being so endearing and their needs so few; both gladly exchanged comfortable domestic backgrounds for the varied hardships of this eighteen-month journey. It was all disarmingly ad hoc – nothing prearranged, no letters of introduction – and often they slept on floors, washed in rivers, ate leftovers.

Nicolas values frugality without ever romanticizing poverty. ‘Frugality is one thing and enhances life, but continual poverty deadens it.’ On the road to Nis the young men calculated that they had earned enough in Belgrade to last for nine weeks: ‘We denied ourselves every luxury except one, that of being slow. With the top down, the accelerator only just pulled out, perching on the backs of our seats and guiding the steering wheel with our feet, we pottered along at twelve miles an hour.’ Now that’s the kind of motoring I can live with!

It’s usual for travel writers to feel a special affinity with certain of their fellows – in my case, with Mary Kingsley and Isabella Bird Bishop, among others. Much less usual is the elated identification of a friend on the printed page; before I had even finished Nicolas’s Preface I was feeling affectionate towards him – and then I heard an echo within myself. Sixty years ago, Mungo Park’s Travels in Africa had had the same effect – an analogy which must seem superficially ridiculous. As an authentic explorer, employed by the African Association to discover the source of the Niger, Mungo was exposed every day to lethal dangers – and never returned from his second expedition. In contrast, Nicolas light-heartedly followed routes known for millennia to nomads, warriors and merchants. The similarity lies in shared characteristics rather than deeds: an enthusiastic appreciation of the unfamiliar (however bizarre), a warm-hearted recognition of what human beings have in common, a cheerful resilience, a precocious emotional maturity, a dry wit and a pleasing tendency to keep their egos in the background.

Between the wars (as oldies are wont to say, ignoring scores of twentieth-century conflicts) the internal combustion engine encouraged overland travel to India. In 1936 Rosita Forbes and Robert Byron turned east, followed by Ella Maillart in 1939. All three wrote entertaining accounts of their eccentric wanderings (Byron’s a classic) but none became intimate with the local peoples in the Nicolas/Thierry way – perhaps partly because of their plump wallets.

In 1953 the young Swiss found most places between Istanbul and the Khyber Pass surprisingly unchanged, visually, by the Second World War, despite its attendant political upheavals. And those regions remained ‘undeveloped’ when I cycled to India exactly a decade later, by a similar though not identical route. My generation was fortunate, born just in time to glimpse a pre-homogenized planet – though of course the seeds of homogenization had already been sown. In eastern Turkey Nicolas noted the Bayburt townsfolk ‘dreaming only of cars, water on tap, loudspeakers, consumer goods’. And in Quetta ‘the shops in Jinnah Road were a distressing sight. Not a trace of craftsmanship. Borne on a majestic wave, the spray of Western junk had reached and ruined local trade.’

To each history-laden city and town Nicolas brings a distinctive blend of boyish excitement, scholarly awareness of the past and tolerant sensitivity to current tensions. Even more compelling, for me, are his evocations of the vast silent spaces between cities. This is a magically sensual book. Apparently insignificant sights, sounds and smells are so deftly captured, in phrases of memorable beauty, that I often seemed to be reliving my own journey.

The travellers spent six snow-bound months in Tabriz; Nicolas taught French, Thierry worked on canvases for sale – he hoped – in Teheran. They rented two almost unfurnished rooms on the boundary of the Armenian quarter where Sunni Kurds sometimes served as an unpredictable buffer between the Shi’ite Azeris and the Monophysite Christians, whose Patriarch then lived in Soviet Armenia. This was the winter of the Musaddeq trial and Nicolas observed that Iran’s ousted prime minister ‘was actually much more popular than the Western press would have us believe. My pupils spoke of him affectionately.’

The Cold Warriors had established mini-colonies in Tabriz, and Nicolas’s dry humour glitters like hoar frost on his laconic account of a failed US school-building project. Having identified ‘a great respect for school in general’ as one of the main ingredients of the American recipe for happiness he adds – ‘Recipes for happiness cannot be exported without adjustments, and in Iran the Americans failed to adapt theirs to a context which puzzled them. That was the source of their difficulties. Because there are worse things than countries without schools: countries without justice, for instance, or without hope.’

The Way of the World suggests that the most fulfilling journeys are only vaguely planned; wise travellers, using intuition as their compass, leave themselves free to be deflected by chance events and encounters. This book also suggests that cycling to India is far less stressful than motoring; not much can go wrong with a gearless bicycle, even on the rough tracks that preceded today’s intercontinental highways. Our heroes’ vehicle faltered frequently, demanding patient ingenuity first to diagnose and then to cure its multiple ailments. In extremis, muscle power had to replace an engine that refused the fearsome gradients around Ararat and the Luz desert’s formidable sand-barriers. Typically, Nicolas makes little of such episodes, treating them not as exhausting dramas but as the amusing, trivial side-effects of dependence on a tiny Fiat long past its use-by date.

Nicolas remarks en passant that ‘A traveller’s social mobility makes it easier for him to be objective’ – a conclusion I also reached in 1963, when my spontaneously welcoming hosts ranged from Balkan factory workers to Turkish university professors, Azeri peasants, Iranian police officers, Afghan tribesmen (and women), a couple of ambassadors and the Wali of Swat. This mobility, largely explained by a scarcity of travellers, could not easily be replicated today. For decades past the holiday industry’s tentacles have been reaching deeper and deeper into every continent, only deterred by wars or rumours of new viral hazards. Therefore the territories that might allow travel to be a personal adventure, a test of adaptability – the individual seeking non-commercial relationships with new places and peoples – have been grievously curtailed. And, which is of far greater importance, this mindless movement of millions makes a sinister contribution to global warming. (Yes, of course I’m a travel snob – it’s inevitable, a generational thing.)

Nicolas left home with an interesting attitude to health care. ‘It was just a case of listening to the body’s music, unnoticed for so long, which gradually returned and with which one needs to be in harmony.’ Alas, this ‘music’ didn’t always give adequate warning and their mothers would not have recognized the gaunt young men who arrived in Kabul in October 1954, wasted by dysentery and malaria. When Thierry became seriously debilitated (Nicolas diagnosed ‘jaundice’, I suspect it was hepatitis A) the friends had to part. Thierry took an Air India plane to New Delhi, planning to continue by train to Ceylon where his fiancée was soon to join him.

Returning alone from the field which then served as Kabul’s airport, Nicolas restricted himself to a brief comment. ‘Time flowed more amply in Asia than at home, and our perfect companionship seemed to have lasted ten years.’ For all its importance, Nicolas never used this companionship as raw material, tempting though it is (and often hilariously successful, q.v. Redmond O’Hanlon and William Dalrymple) for an author to present friends as foils.

On first reading The Way of the World I exclaimed to myself, ‘Here’s a poet, using prose!’ It came as no surprise to learn that the translator, Robyn Marsack, is herself a poet of distinction. In Geneva she spent time with the sexagenarian Nicolas (‘very genial and courteous’) and wrote in a recent letter to me: ‘Part of the enjoyment of all this comes from the collaborative nature of the work, the correspondence and discussions about words and tone and structure.’ One senses her enjoyment of this exceptional challenge (translation being a challenge in proportion to the worth of the original) – and English-speaking devotees of Nicolas’s work must feel grateful to her.

Rereading can induce an irrational guilt when dozens of potentially rewarding but unread volumes crowd one’s shelves. However, for a full appreciation of its several layers The Way of the World deserves not only rereading but re-rereading – with pauses to relish Thierry’s hauntingly beautiful illustrations in the new Eland edition. Certain it is that this ‘masterpiece’ (Paddy Leigh Fermor’s judgement) will survive into the twenty-second century – unless The Chip has by then obliterated The Book.

Dervla Murphy, born in 1931, was an Irish travel writer. 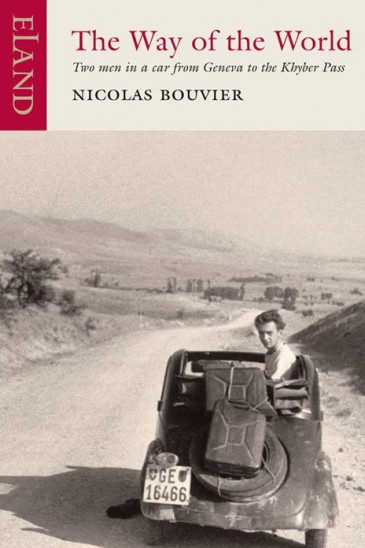 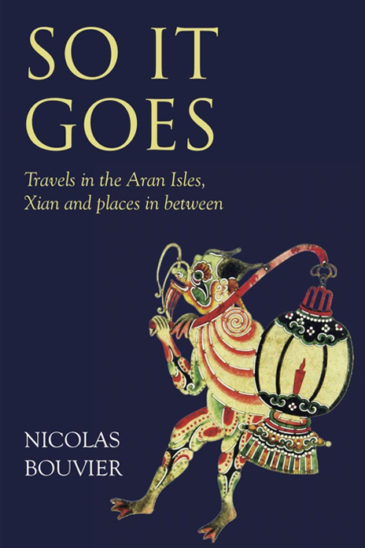 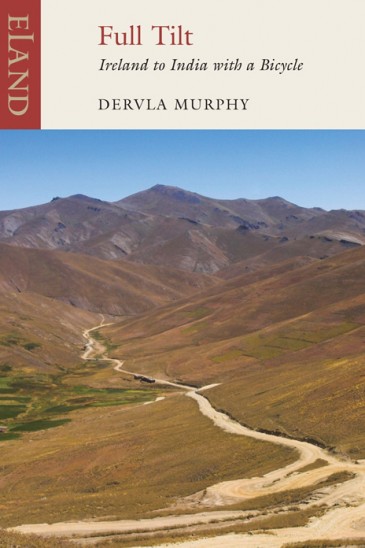 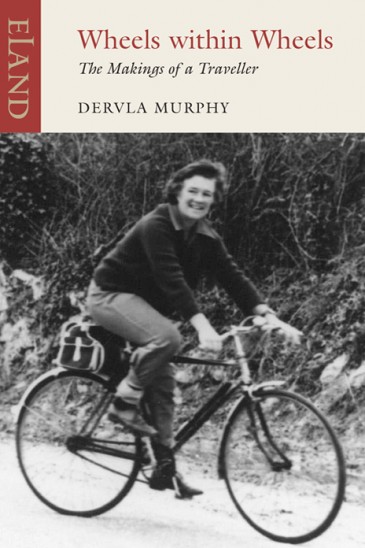