Every Thursday now at 8 p.m. in London and across the country, we stand on our doorsteps and clap and bang saucepans as a thank-you to the NHS nurses and doctors and all the other workers who put their lives on the line for us every day and night of the week. On 12 May it was, appropriately, International Nurses Day, which is celebrated on Florence Nightingale’s birthday (her 200th this year), and hearing her mentioned on various radio programmes, I took down Cecil Woodham-Smith’s biography, published in 1950, and read the first few chapters.

It’s many years since I last opened it, and I was struck, first, by how brilliantly written it is, and second, by what fun and what a stunner the young Florence Nightingale obviously was. The image many of us have of her, no doubt, is of the legendary and somewhat forbidding ‘Lady with the Lamp’, and in 1918 Lytton Strachey did a good job of character assassination in his Eminent Victorians. But with this scrupulously researched, prize-winning biography Mrs Woodham-Smith (as I can only think of her – she often refers to her subject as ‘Miss Nightingale’) put the matter to rights. In these early chapters Florence – or Flo as she was always known – appears as the beautiful, high-spirited and brilliantly intelligent young girl she clearly was.

She had a lot to be high-spirited about, coming from an intellectual, well-connected and extremely well-off family, doted upon by her parents, exposed to all the interesting currents of the day, and enjoying travel to all the great capitals of Europe. When the family went abroad in 1837, they travelled in a vast six-horse carriage specially designed by Flo’s father. (A charming dilettante and amateur architect with perhaps more money than sense, William Edward Nightingale, or ‘W.E.N.’ as he is known throughout the book, had already designed a fifteen-bedroom family house in Derbyshire which had turned out to be a complete failure.) The family hoped and believed that Flo, who had many admirers, would make a brilliant marriage, but Flo had other ideas and then, when she was 17, came the troubling ‘call’ from God, which would shape the rest of her life and which revealed the iron determination of her character.

I was gripped from page one of Cecil Woodham-Smith’s biography. It felt surprisingly modern, and I loved its author’s eye for detail and her approach to her subject – respectful and sympathetic, but not uncritical, and with a nicely humorous undertone. I sat where I had taken it from the bookshelf, and for an hour or so it shouldered aside everything else I was supposed to be doing.

As may be obvious, radio features a good deal in my life, especially now, and especially BBC Radio 4. There is a radio in every room in our house so that I have instant access, and when I am pottering or moving from room to room, I can turn them all on and enjoy a continuous listening experience – an idea which I’m sure will seem archaic to younger readers, who just plug themselves into their smartphones. During lockdown we have been treated to replays of some of the BBC’s wonderful historic recordings, including significant episodes in ‘the everyday story of country folk’, Gail’s and my favourite, The Archers. Last week it was the shattering episode in which gentleman farmer and landowner Brian confesses to his wife Jennifer that the baby Siobhan, the local doctor’s wife, has recently given birth to is actually his. As I sat at the table with my head in my hands listening to Brian stammering out his shameful confession while Jennifer had hysterics, my husband – whose idea of Hell is being marooned on a desert island with only an omnibus edition of The Archers – entered the kitchen.

‘What’s going on?’ he asked

‘It’s appalling,’ I heard myself saying. ‘And just to think, he’s an SF subscriber.’

I hope the actor Charles Collingwood who plays Brian won’t mind my revealing that he (and his wife Judy Bennett, also a member of The Archers cast) are both supporters of Slightly Foxed. My husband looked at me questioningly, and we both burst out laughing. As often seems to happen in these confusing times, the line between fiction and reality had momentarily become blurred.

Last week I said there was absolutely no news, but the other day there was high drama here. We were sitting in the kitchen having lunch when my husband suddenly shot out of his chair, exclaiming, ‘Oh my god, there are cows on the garage roof!’ And indeed there were, about fifteen young black bullocks kicking their heels and looking thoroughly pleased with themselves. Our grassed-over garage roof was never designed to bear the weight of one cow, never mind fifteen, so the first thing to do was to get them off the roof pronto, then find out who they belonged to. There are at least four farmers nearby, all of whom have cows, of a variety of breeds. Had they come from the village by the bridlepath or had they wandered down Slinkers’ Lane? While my husband (accompanied by Stanley the cocker spaniel) practised his cow-herding skills, I rang one of the farmers. He soon turned up, but no, they weren’t his, they were Angus/South Devon crosses that belonged to . . .

Two long hours later, four of us had managed to get most of them back to where they belonged, but since none of us is getting any younger and we were all rather worn out by this stage, we decided to leave the remaining four safely in our field overnight. 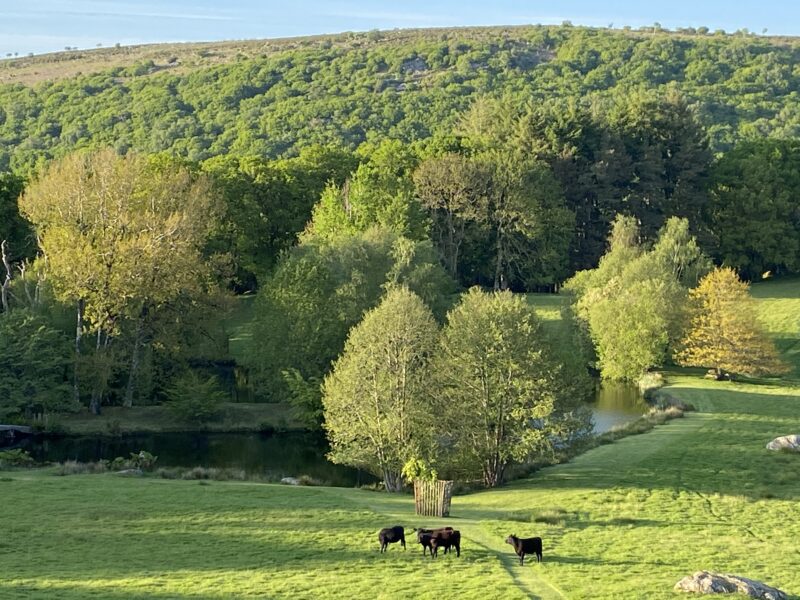 The following morning the recalcitrant quartet were retrieved, and we returned to our daily routine.

A few hours later, I wandered into the kitchen, thinking about lunch. There were more cows, gazing in through one of the windows. Not the same cows, mind – these were brown and black and white ones. More shooing and shouting, cows galloping past my precious greenhouses bucking and bellowing, Stanley beside himself with excitement. With great presence of mind my husband managed to open a strategic gate and now this little herd are down by the apple trees awaiting collection by a different farmer. They remind me of some teenagers during lockdown who, despite the regulations, simply have to get together for a bit of a party.

Our garage has survived though its roof is pitted with hoofmarks. I’m not sure why we call it a garage since it’s never had a car in it. Built into the back of a slope and so invisible to passers-by on the bridlepath above, the building is divided into compartments. In one sit tools, the lawnmower and my little potting table. The next is a mini-warehouse that holds all the back issues of Slightly Foxed, sixteen years’ worth of company accounts and the SF archive. Then comes a storage area for our apple press and the usual family clutter – letters and photographs going back to before the First World War which I still haven’t got round to sorting out, bric-à-brac destined for the village show and fair (sadly cancelled this year), a box of extra jam-jars for jellies and chutneys, a car seat for the grandchildren, a spare tyre.

The final end section serves as both woodshed and carving studio. About ten years ago my husband took himself off to Cambridge for a weekend course sponsored by the Lettering Arts Trust and run by Tom Perkins and Eric Marland, both masters of the craft of stone letter carving. Since then he’s been chipping away in his studio, first on offcuts and then, as his confidence has grown, on proper pieces of limestone and slate acquired on visits to the quarries at Portland in Dorset and Delabole in North Cornwall. Now we have a carved piece of limestone by one gateway, intended (in the nicest possible way) to deter walkers from straying from the bridlepath: THE LOST MARBLES DEPT. NO ENTRY. There’s also a lovely carving of a Leonard Cohen quotation up in a field, and a deliciously curvaceous ampersand which sits on a shelf by our front door. 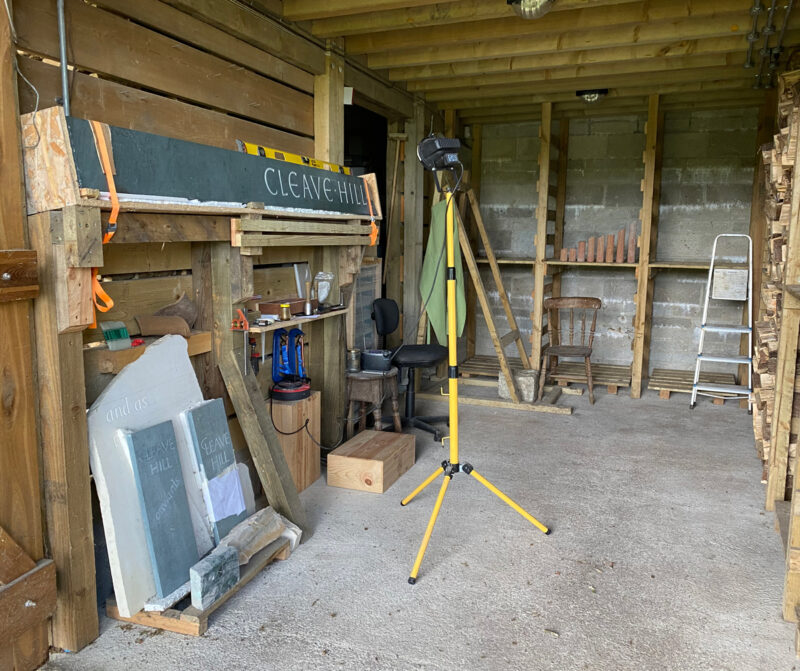 For the last year he’s been working on his most ambitious project so far ‒ a sign for the house. I say a sign, but it’s actually a nine-foot-long column of greyish-green slate from a quarry near Cockermouth in Cumbria. Getting it off the back of the delivery lorry and into the studio was quite a feat, and I have no idea how we are going to install it, but I guess we’ll cross that bridge when we come to it.

The Lettering Arts Trust has a wonderful small gallery at Snape Maltings which is well worth a visit as and when we can all do such things again. In the meantime their website has details of carvers who take commissions, and also a virtual shop full of tempting calligraphy.