My admission in an earlier diary that, whereas my husband loves our nearby park, to me it just feels like pretend countryside, produced one shocked email and several hurt comments from local friends. Our contributor Roger Hudson (compiler, too, of An Englishman’s Commonplace Book, which we’ll be publishing in September) told me that he had once felt the same way about Kensington Gardens, but had made a ‘conscious decision to abandon comparison with the real country of his childhood’. He was helped in this, he said, by the fact that parts of Kensington Gardens still felt rather like the parkland of a country seat, so providing a kind of transitional experience, not quite town and not quite country, and he advised me to strike out away from the joggers and dog-walkers into the wilder areas.

In the 1790s, when Stoke Newington was a village, Clissold Park was indeed a gentleman’s estate, surrounding Paradise House (today’s trendy café), which was built by the Quaker philanthropist and anti-slavery campaigner Jonathan Hoare. But Hoare hit hard times and for the next hundred years the estate was passed around until the building boom of the 1880s hit sleepy Stoke Newington, and the Ecclesiastical Commissioners bought it intending to make money out of development. At this point it was saved for the working people of the area by the dedication of an optical manufacturer called Joseph Beck and Jacob Runtz of the Metropolitan Water Board. Together they persuaded the Water Board to buy the land and create a public park, which was opened by the new Greater London Council in July 1889.

At the far end of the park are two lakes, Beckmere and Runtzmere, named in memory of these admirable men. This is my husband’s favourite spot, a somewhat more rural-seeming and usually less frequented part of the park, and on a balmy evening I accepted his invitation to take a walk there and, as it were, have another go. It certainly is a delightful, very unmunicipal area of woodland paths and old trees, with the additional magic that water brings to a landscape, and as I walked through the gates it was fairly easy to imagine myself entering the park of some great estate. Or would have been had it not been for the runners running, power walkers striding, bikers biking, children scooting and couples strolling, each on a mobile phone: (‘Have you tried a different mouse . . . ?’ ‘Yeah, 10 a.m. tomorrow, the whole department . . .’). The lakes were pretty busy too. Dabchicks were diving, ducks were flying low and landing in a flurry of foam, and on one of the islands a splendid swan was visible in the shade of a tree, curving its neck to preen itself. In the centre of the lakes complacent-looking ducks nested on small floating platforms. My husband remembered a park keeper telling him these had been put there for the benefit of terrapins, which were once popular pets but which were quickly offloaded when their owners discovered how big they were likely to grow. In fact I found myself enjoying the sheer energy of all this focused activity. But for getting myself into another frame of mind about the park, I decided I’d have to wait until lockdown was over. 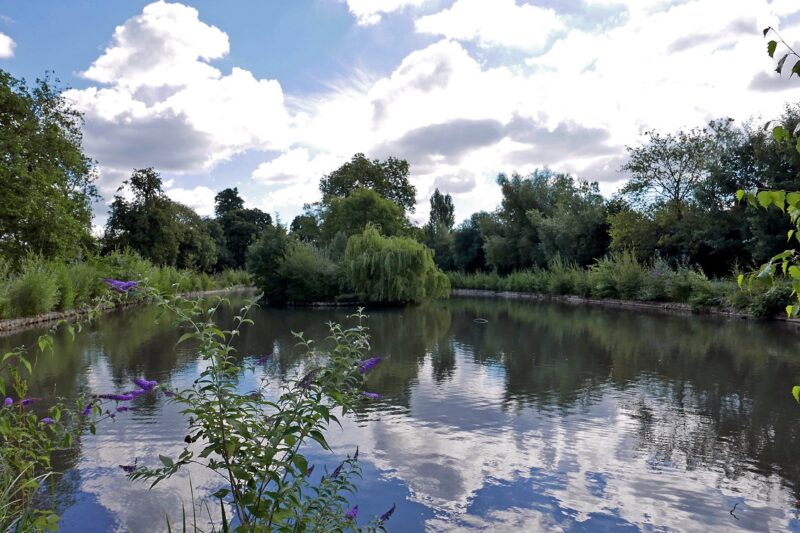 Like a lot of people, I imagine, these past months have made me truly appreciate our local shops, and this was the subject this week of BBC Radio 4’s Food Programme (available now on iPlayer). I was delighted to hear the voice of one of the owners of ‘Seasons and Blossoms’, our lovely local greengrocer-cum-delicatessen, which has kept us all going with good cheer and deliveries when the supermarkets, like great slow-moving beasts, were unable to get their act together. I hope people will go on supporting local shops when the crisis is over, because they deserve it, and they give colour and humanity to our neighbourhoods. I’m thinking particularly of the Aladdin’s Cave of a shop near Finsbury Park, whose elderly Chinese owner can produce almost literally anything you want from the dark and crowded shelves at the back – as evidenced today when she came up with a particular metal bracket we’d failed to find in any builders’ merchant’s. Garden compost, a shrimping net, a non-standard light fitting, ask and it shall be given unto you. Small really is beautiful.

Ambridge alert! I do apologize to readers who have no interest whatever in the subject, but feel I must add my voice to the national outcry over what has happened during lockdown to what was once Gail’s and my favourite soap, The Archers. Personally I suspect a plot on the part of the BBC to destroy it in Radio 4’s perennial and misguided search for a youthful audience. At first, understandably since it is recorded in advance, the inhabitants of Ambridge remained blissfully unaware of what was going on in the outside world. People went on drinking in the Bull and having soothingly pointless conversations with busybody Susan in the village shop. But when these episodes ran out I turned on the radio to find that the characters weren’t just social-distancing, they were no longer allowed to speak to one another at all. Since then we’ve suffered toe-curling, navel-gazing soliloquies from all of them in turn – OK for Hamlet, but not so good when it’s about selling second-hand farm machinery. What is all this? If we can meet up with guests on air while recording SF podcasts from home, surely BBC technology can do it for The Archers.

Hazy, lazy days of summer. The sheep are spending the hottest part of the day sheltering in the lee of the granite walls or in the long grass under the zelkovas. We planted them about twenty years ago and now they form a broad canopy of dappled shade which the sheep seem to love. The damsel flies have appeared on the lake as well, darting streaks of electric blue among the yellow flag irises and marsh marigolds, and in the long evenings swifts skim the water. 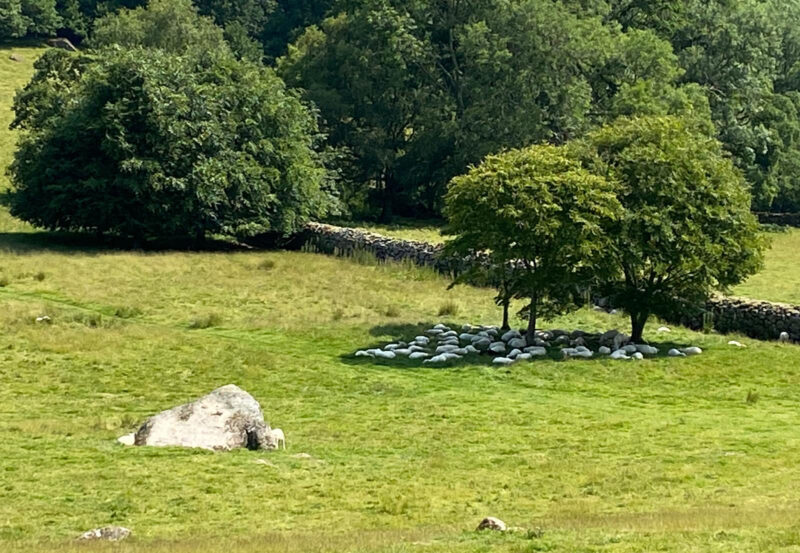 Up near the bridlepath rabbits have created a burrow under an outcrop of granite, and in the evening we sometimes see a small herd of roe deer leaping through the trees behind the house. In among the reeds in a rather boggy part of the field, slow worms have emerged to bask in the sun. They’re a beautiful shade of copper but, though we know they aren’t snakes, they still cause mild alarm when spotted.

Getting any work done in this weather is a bit of a struggle and yesterday I gave up altogether. A friend had suggested going to see a famous garden and taking a picnic, so off we went, six of us in convoy, up the M5 and then off on a minor road towards Wellington and down ever smaller Somerset lanes, their verges a cloud of cow parsley, until we reached a cattle grid and a long shaded drive beneath an avenue of lime trees. We’d arrived at Cothay, which dates back to the fourteenth century and is said to be the finest small medieval manor house in England. 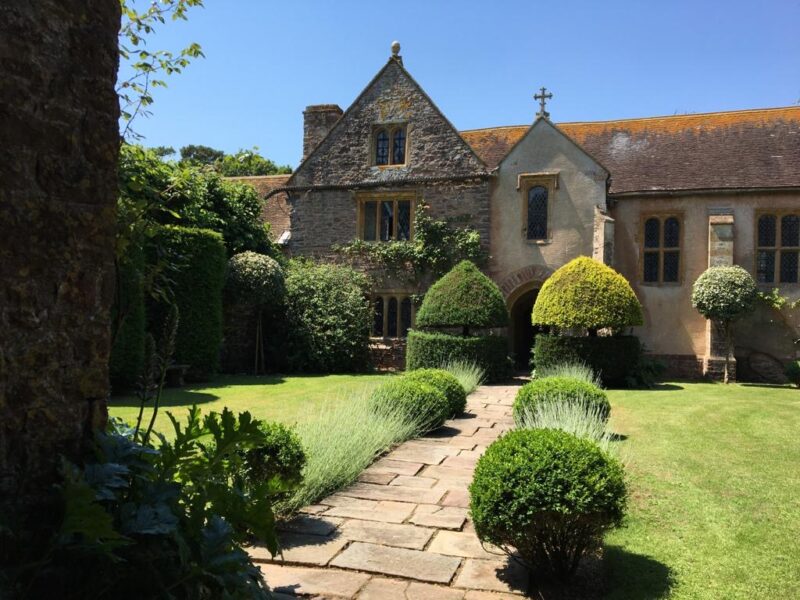 At the moment the house is closed, but the gardens have reopened. And what gardens they are ‒ a whole series of outdoor rooms surrounded by towering yew hedges, and each ‘room’ full of flowering shrubs, climbers and perennials. The garden scenes in the televised Wolf Hall were filmed here and I’m not surprised it was chosen as a location. Wandering down the 200-foot-long yew avenue that connects each room, I wouldn’t have been in the least surprised to see a Tudor figure disappearing around a corner in the distance. 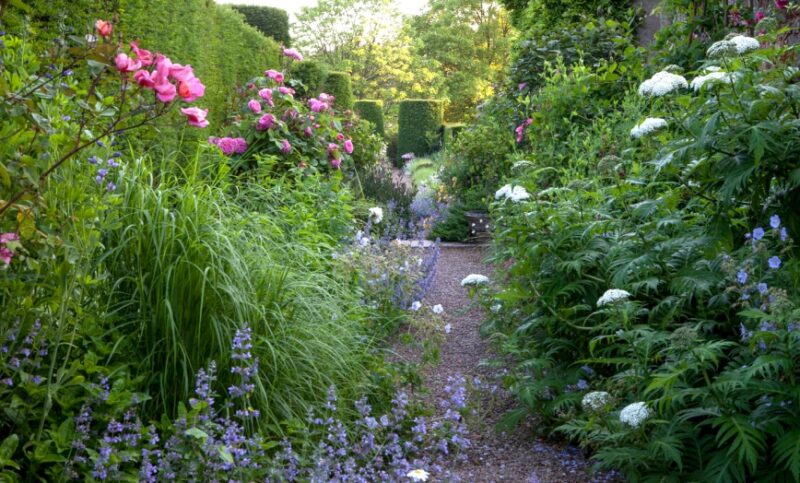 Which reminds me that the final volume in Hilary Mantel’s trilogy about Thomas Cromwell, The Mirror and the Light, is sitting on my shelf of unread books. I’m longing to open it but out in my garden there are a thousand and one things that need doing. Perhaps I’ll save it for the long winter evenings when the greenhouses are empty and beautiful gardens are closed to visitors. It’ll bring back memories of a magical day full of friendship and talk of plants in a timeless setting.

Now life is starting to return to normal, from the beginning of July we’ll be writing our diary monthly rather than weekly. We love your appreciative messages, but we’re aware that you receive other emails from SF, and that it’s possible to have too much of a good thing.