A highly sensitive translator friend of ours once told us, quite seriously, that he couldn’t read in a room where there were other books. Their presence was too distracting, too powerful. We sniggered rather unkindly at the time, but this week, wandering round the bookshelves and feeling somewhat cut-off and unreal in the dim light of a wet afternoon, I felt acutely the presence of authors I’d once been passionately attached to and hadn’t thought of for a long time, especially the diarists, nestling in the ‘biography’ section in the spare room.

I’ve always loved diaries, the more volumes they run to the better, and the diarists I like best are the unguarded ones, who are writing unselfconsciously for their own pleasure and not with publication in mind. That’s why I can’t really love the diaries of politicians, entertaining though some of them are. They’re too calculated, too self-justifying, too pleased with themselves, like Alan Clark.

One of my two top favourites is Francis Kilvert, the young nineteenth-century clergyman who spent much of his quiet life in the parish of Clyro in Radnorshire, on the border of Wales. I love him because he’s so detailed and poetic, so sensitive to nature and to the individuality of his parishioners, so spontaneous and open-hearted, always falling in love, but never able to marry because his curate’s pay isn’t enough. I enjoy his animal high spirits – jumping into an icy bath in winter, wildly dancing the Lancers at a party ‘amid screams of laughter’, ‘running over the fields to Hay’ to see his sister Louisa and her family who lived at Hay Castle. His diaries, discovered and edited by the poet William Plomer and published in three large volumes between 1938 and 1940, cover less than a decade, from 1870 to 1879, but they bring a whole Victorian countryside and its society to life. I longed for him to find a nice girl, and when he became vicar of Bredwardine he did finally marry, but he died a month later of a ruptured appendix at the age of 38. I was devastated and so were his parishioners, whose ‘sobbings and ejaculations’ were ‘more than sympathetic natures could bear to listen to’, as William Plomer tells us in his introduction.

The other is James Lees-Milne, an entirely different kettle of fish, waspish, snobbish, amusing, often bitingly critical of others but also disarmingly clear-eyed and honest about himself. Well-connected and Oxford-educated, he began his diaries, which finally ran to twelve volumes, in the middle of the Second World War, when he was employed by the fledgling National Trust to travel round England in the Trust’s unreliable baby Austin (‘Before I reached Princes Risborough the car practically stopped, and a rather delicious smell of rice pudding accompanied by a curious knocking sound, came from its inside . . .’), interviewing the eccentric owners of country houses who could no longer afford to run them and were desperate to offload them on to somebody else. 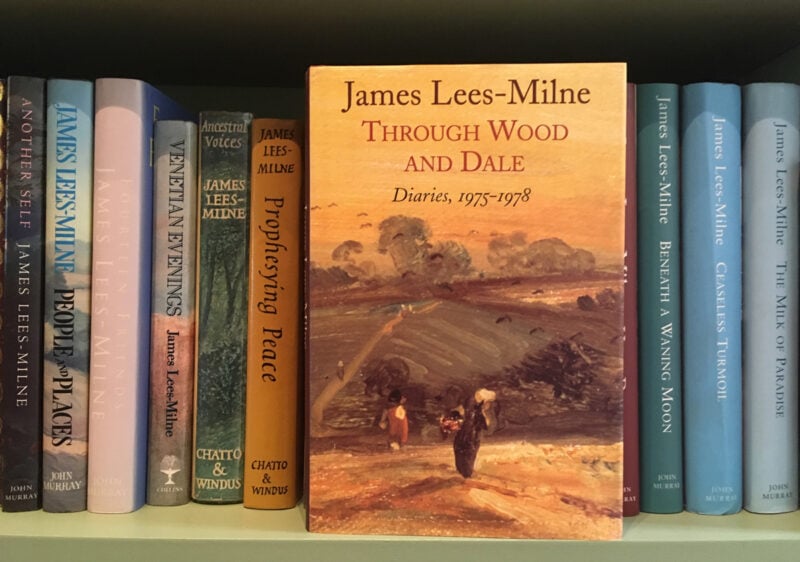 His picture of these remote houses and the unspoiled English countryside of the ’40s and ’50s brings on waves of nostalgia, and the meticulous footnotes are as addictive as the diary, a tapestry of the interconnections of literary and upper-class England from 1942 to 1997, from members of the Royal Family to his gadget-loving aunt. I don’t think I would have felt at ease with him, nor his alarming wife Alvilde, but I adore his diaries, which, if you take to them, should carry you through the lockdown, however long it goes on. You can read more about both diaries in issues 8 and 16 of Slightly Foxed.

I usually work in a book-lined alcove in the sitting-room. It’s a lovely spot, especially in winter when the house is shrouded in mist or the rain is beating down outside. Then my alcove feels warm and snug. Come the spring, however, I often migrate to a sunny spot that overlooks our lower grass roof. Yesterday, as I sat there reading a set of proofs, a sudden movement beyond the window caught my eye, and I looked up to see a stoat rippling through the grass. It reminded me of a scene in BB’s The Little Grey Men, which we reissued as a Slightly Foxed Cub a few years ago. Two of the little grey men, Baldmoney and Sneezewort, are making their way through water meadows on their quest for their long-lost brother Cloudberry. Suddenly they realize that a stoat is on their trail: ‘He came along slowly with frequent pauses, showing his yellowish-white chest as he sat up in the grass. When he ran, his body was arched in a hump, the black-tipped tail held high. Nearer and nearer he came . . .’ I don’t suppose my stoat was hunting little grey men – more likely the field mice that have made their home in the roof – but you never know. 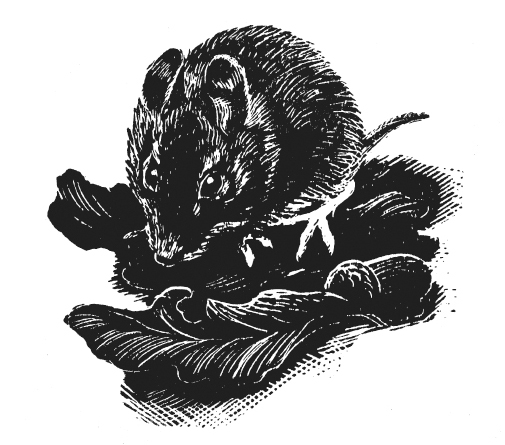 Last week we discovered a new walk. To the west of the village lies a stretch of moorland that runs from Hound Tor northwards to Hayne Down. We often walk up to the down along a bridlepath lined with gorse and heather. It’s a stiffish climb in parts but the view from the top is worth it. On this particular day, however, we stuck to the fields and woods just below the down. As we walked, we could hear a cuckoo in the distance, and closer by the distinctive call of a pheasant. Among the trees a faint glimmer of blue reminded us that the bluebells will soon be out, and as the land fell away to the valley bottom we came to Hayne Brook. I love Dartmoor’s streams. They sparkle with light and energy, and the water in the shallows is always a crystal-clear golden brown, from the peat off which it runs. We waited while Chudleigh and Stanley had a good wallow before heading for home and a cup of tea.

The land beneath the down belongs to a friend called Anne who lives at Wingstone Manor. From 1906 to 1924 the writer John Galsworthy and his wife Ada rented the front part of the manor house from a farmer and spent long periods there each year. (The rented section of the house had no kitchen, so they were served meals by the farmer’s wife through a hatch in the dividing wall.) It was at Wingstone that Galsworthy wrote the first three volumes of what became known as The Forsyte Saga, but he also took part in village life, establishing a rifle range and club, supporting and playing for the village cricket team, donating oil-fired street lights for the green by the church and setting up a fund to pay for a district nurse. Anne reminded me that Galsworthy later won the Nobel Prize for Literature. I wonder how many other Nobel Prize winners have played cricket for their village team.

With the advent of spring we’ve been on more foraging expeditions, too. First, nettles. Nettle-picking is not my favourite job but the leaves do make a delicious soup. This recipe, for four quite hungry people, comes from the Wild Food Company who run very good foraging courses around the country:

Fry the onion and garlic in the olive oil until softened but not browned. Add the nettles, potato and stock, and boil until the potatoes are cooked, then liquidize and season. Stir in the cream, reheat but do not boil the soup, and serve with homemade croutons. 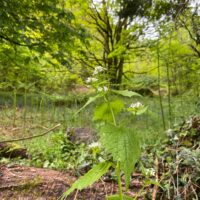 Next on the list is garlic mustard, also known as Jack-in-the-hedge, which grows in profusion along the local lanes round here. No need for a recipe this time. The leaves just make a lovely addition to a salad.