Home » Et cetera » Articles & Extracts » The House of Elrig | Chapter I: The House

You can see the house from a long way off, a gaunt, grey stone building on a hillside of heather and bracken. The road, very narrow, has climbed two or three hundred feet from the sea; slanting at first from the grey boulder beach up near-cliffs of coarse grass, bracken and thorn scrub, the few trees stunted and deformed by incessant westerly winds, so that their limbs and their heads seem to be forever bowed and straining towards the land; on and up, winding through poor agricultural land, where the fields with their rough dry stone walls alternate with patches of scrubland, thorn bushes and briar thickets with the bare rock showing between them; through the tiny village of Elrig, with a smithy and a ruined mill but no shop; then, a mile on at the corner of a ragged fir wood sheltering a loch, is the turning to the house.

The turning is to the left, and whether you take it or whether you continue along the shore of the loch, everything for miles to that side of you is the untamed land of peat-bog and heathery hills, of sphagnum moss and myrtle and waving bog cotton, of thorn scrub and rushes and bracken; the road is the line that divides the desert from the barely sown land upon its other flank.

From the turning, the road, just wide enough to take a car, runs straight and flat across a mile of peat-bog before losing itself in the creases of the hill upon whose breast the house stands. In spring and summer the deep drainage ditches at its sides are choked with meadow-sweet and cow-parsley, and the big flat bog, ‘the Moss’, is sweet with the haunting trilling of curlews and the wild notes of tumbling lapwings. After a shower of rain the air smells of the bog myrtle, and big black slugs come out on to the edges of the unmetalled road. I walk home at the opposite side of the road from my nurse; my mother, watching from the distant windows of the house, worries that we have quarrelled, but we are counting slugs in competition.

I was born in the House of Elrig, three months before my father was killed at Antwerp in October 1914, and only a short time after the house itself was ready for habitation. My family home, Monreith, was seven miles away on the low lands by the sea, and my grandfather who lived there was 70 when I was born, though he lived for another twenty-three years and would have gone on doing so had he wanted to.

My ancestors had been implacable expanders, and even the greatly diminished estates that he then owned (he was an implacable spender) contained the ruinous or otherwise uninhabitable remnants of two other previous seats. The first of these, the House of Ballingrene, was a small structure with the sole pretension of a round tower and turret; this Edward Maxwell was granted in 1482, and with it a quarter of the Barony of Monreith. His grandson consolidated the position in 1541 by sallying forth no less than five miles to win the hand of his cousin Margaret, who was heiress to the other threequarters. His son, no less daring, made another sally, though of lesser distance, and married the heiress daughter of Sir Godfrey McCulloch of Myrton Castle – a much more ambitious building than Ballingrene – into which the Maxwell family then moved, and were well ensconced when William Maxwell was created a Nova Scotia baronet in 1680. Myrton Castle, on another shore of the wooded White Loch of Myrton over which Monreith now looks out, was a very beautiful but doubtless uncomfortable fifteenth-century tower. (‘From the holes in those turrets,’ I remember a visitor asking my grandfather, ‘did they pour boiling lead?’ ‘Not lead,’ he replied, and seemed at a loss to continue.)

My grandfather wrote: ‘My great-grandfather, having to go and attend to his parliamentary duties in London, left with his wife £2,000 to make an addition to the old castle in which they lived. In what seems to us now an evil moment she listened to the advice of an architect who, as she reported to her husband in a letter still in my possession, persuaded her that he could erect on a fresh site “a much more genteel residence” than the old one. Sir William having raised no objection, the central block of the present house [of Monreith] was built in part, but the wings were never begun.’ In order to build the genteel residence this vandal of an architect pulled down the greater part of Myrton Castle, leaving, by the time he had finished carting stone to the new site, little but the tower and the great walled garden; so that the glorious avenue of beeches led only to ruins and nettles.

The Maxwells, the eldest son monotonously christened William, had meanwhile avoided fame but not always notoriety, the peculiar wickedness of certain holders of the title being documented with scurrilous detail in the parish records. (The worst had a black page boy whom he beat to death, and a white horse on which he went wenching at night, wandering far afield like a tomcat and leaving not a few unacknowledged kittens.) My grandfather had been the first to achieve academic fame, though paradoxically he appears to have been the first to find his income insufficient. He inherited a sizeable estate the net rental of which, though partly moorland ground, was £16,000 per annum, and after an interminable and distinguished, though perhaps over-deployed, public career as politician (sometime Secretary of State for Scotland and a Lord of the Treasury), painter, archaeologist, historian, naturalist and writer of stupendous output, he departed this life as a Knight of the Thistle, Privy Councillor, Fellow of the Royal Society, Lord-Lieutenant of the County of Wigtownshire and Grand Old Man of Galloway; the possessor of a shrunken estate of 9,000 acres – and the noteworthy failure to have anything of any real value left in the house. (One of the few pictures of great worth was Romney’s Jane Duchess of Gordon, daughter of the 3rd Baronet of Monreith, and her children – this he sold privately to an American visitor for £3,000. It later changed hands for more than ten times that amount.) He had, however, built on a Victorian wing to the fine eighteenth-century house, a wing which my brother later demolished, and he had formed a collection of flowering shrubs and trees among the finest in the British Isles.

For the most part these were planted flanking paths in woodlands adjoining the house; the garden itself was sloping, haphazardly planned, and surmounted by a half-circular terrace on whose gravel surface a short cut growth of box or privet spelt the Latin words of the 102nd Psalm: ‘The days of man are but as grass, for he flourisheth as a flower of the field, For as soon as the wind goeth over it is gone and the place thereof shall know it no more.’ Looking out over this, the glass of the old nursery window-panes on the top floor were scored by my father’s initials, and I would picture him gazing down upon the rain-drenched garden and defying the words by this small act of human assertion.

Extract from Chapter I
Slightly Foxed Edition No. 31: Gavin Maxwell, The House of Elrig © The Estate of Gavin Maxwell 1965 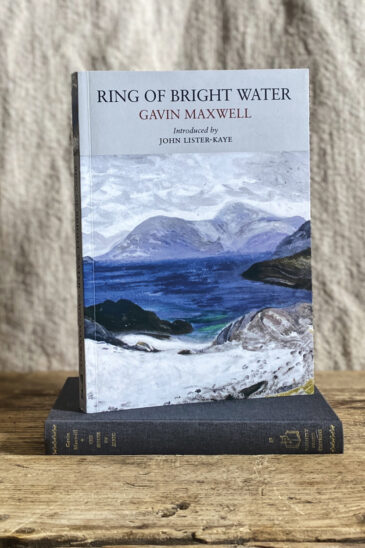 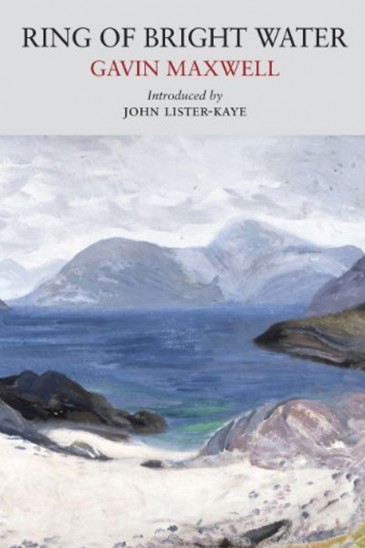 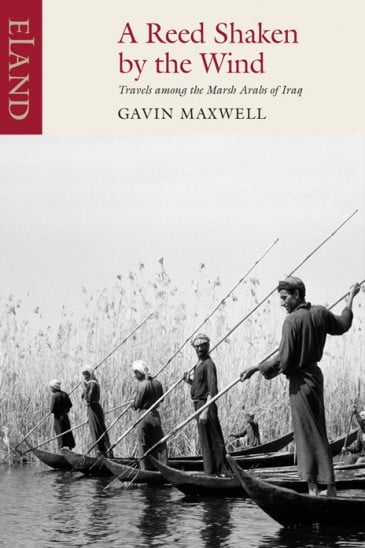