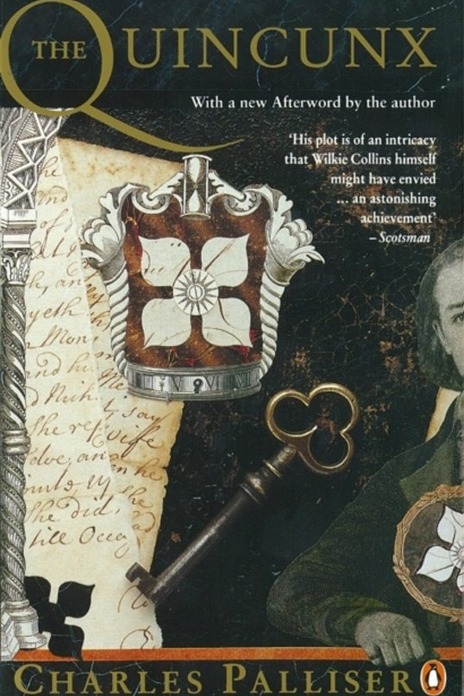 Read Extract Listen to Audio
● If you are a current subscriber to the quarterly your basket will update to show any discounts before the payment page during checkout ● If you want to subscribe now and buy books or goods at the member rate please add a subscription to your basket before adding other items ● Gift wrap, messages and delivery instructions may be added during the checkout process ● If you need help please send us a message using the form in the bottom left of your screen and we’ll be in touch as soon as we’re back at our desks.
Description

The Quincunx is an epic Dickensian-like mystery novel set in nineteenth-century England, and concerns the varying fortunes of young John Huffam and his mother. A thrilling complex plot is made more intriguing by the unreliable narrator of the book.

Some people bring wine to dinner. Some bring dessert. My friends bring books, which is, I suppose, why they’re my friends. One night, a ‘friend’ – I use the term loosely – cast a cloud over my life of unmolested tranquillity by presenting me with The Quincunx by Charles Palliser. (A quincunx is a group of five objects arranged so that four form a square and a fifth sits in their centre, as on a dice. I had to look it up too.) A master of the soft sell, he simply said, ‘Got this at a jumble sale. It’s kind of Dickensian. Right up your street.’ Then, rather than handing it to me, he placed it on a table and backed away, as if he had lifted a family curse by passing it on to the innocent.

The Quincunx is ‘kind of Dickensian’ in the same way that the Taj Mahal is kind of a nifty tomb. Even the name of its central character, John Huffam, is lifted from Palliser’s great inspirer, Charles John Huffam Dickens . . .

The leitmotiv of The Quincunx is the interplay of Chance and Design – do we perceive Design in our lives, or merely impose it? – underscored by the recurrence of those Dickensian coincidences...