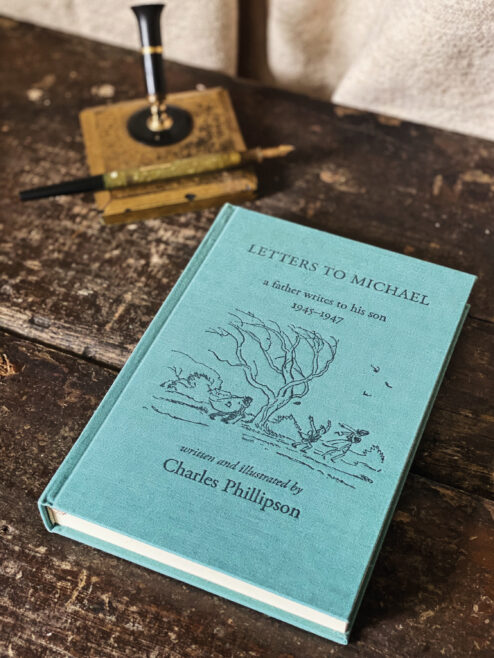 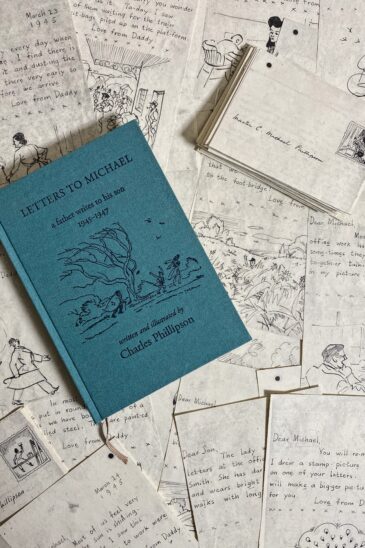 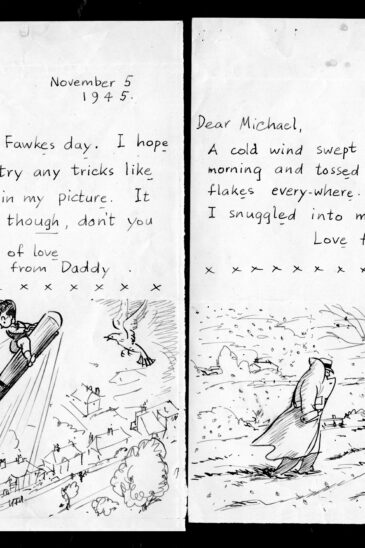 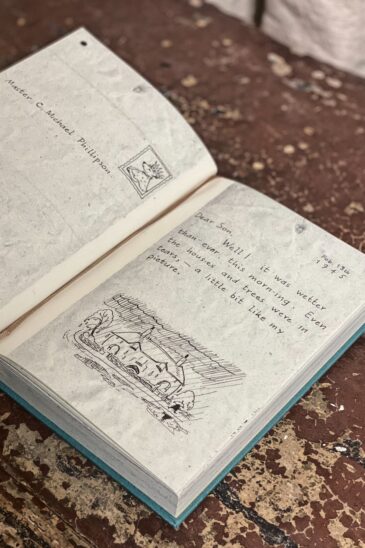 Watch Video Read Extract
Made in Britain
● If you are a current subscriber to the quarterly your basket will update to show any discounts before the payment page during checkout ● If you want to subscribe now and buy books or goods at the member rate please add a subscription to your basket before adding other items ● Gift wrap, messages and delivery instructions may be added during the checkout process ● If you need help please send us a message using the form in the bottom left of your screen and we’ll be in touch as soon as we’re back at our desks.

‘My dear Michael,
Mummy and I are very pleased that you are now able to read books for yourself . . .
As you grow older you will find that good books can be some of your best friends . . .
Much love from Daddy’

It is 16 January 1947 and, as he does most days, Charles Phillipson has taken up his fountain pen to write to his young son Michael. Before Michael started school in 1944 Charles had already made him a book of playful drawings of the alphabet to encourage his reading. From early 1945 to the autumn of 1947 a sequence of 150 illustrated letters followed, creating a series which would, ‘like the Pied Piper’s irresistible sounds’, draw Michael into a world of reading.

In these letters Charles captures the delight to be found in the mundane detail of everyday life, seen through the lens of his own quirky imagination: passengers on the morning train hidden behind their newspapers; clouds sketched as if they are players on a stage; the fun to be had on a revolving office chair; numerals that morph into animals; the different ways in which men carry their umbrellas; a walk on a very windy day; the sun rising over chimney-pots; the postman on his bicycle; carrying home a Christmas tree. Jotted on a sheet torn from a pad of office paper, and often sketched in haste in tea or lunch breaks, each letter was embellished with a hand-drawn stamp which made the young Michael feel as if he was receiving ‘real’ letters. And real letters they are – love-letters, even – for through their affectionate words, mischievous drawings and gentle encouragement of Michael’s own literary and artistic explorations, a father’s love for his son shines out.

Charles Phillipson grew up in a green suburb of Manchester where much of his time was spent with pen, pencil or brush in hand, exploring the surrounding countryside. After leaving school at 14, he attended evening classes at the city’s School of Art – L. S. Lowry was a fellow student – and developed his drawing and lettering skills as a printer’s apprentice. Some years later he became head of the publicity department of a large chain-making company, where he used his humour and love of language to create instruction manuals and advertising for their products.

In 1937 Charles married Marjorie and they moved to a village just south of Manchester. For a short time, life seemed idyllic but then tragedy struck when Charles was diagnosed with progressive and untreatable multiple sclerosis. The war, with its barrage balloons and communal air-raid shelter in the garden, followed – as did Michael – and the letters began soon after. Charles was made redundant in 1955 and from then on received only a small disability pension but, despite the inexorable progress of his disease, he never stopped painting and drawing, and he illustrated a number of educational children’s books.

Now these letters, saved by Marjorie who recognized their unique quality, and treasured by Michael after his father’s death in 1974, have been gathered together in a handsome cloth-bound hardback edition. Letters to Michael presents a touching portrait of the relationship between a father and his son and captures a bygone age when people still wrote letters using pen and paper. Altogether, this charming book is an antidote to troubled times and would make a perfect Christmas present.

‘There is a poignant urgency underpinning Phillipson’s letters, his care to underline tricky spellings, his striving to imagine the world through his tiny son’s eyes.’ Iona McLaren, Telegraph

‘These sweetly simple records of an ordinary suburban life render everything about it miraculous. The sheer quality of a devoted father shines from every detailed line, written and drawn . . . I keep returning to this magical collection, each time with renewed wonder that the letters survived’ Bel Mooney, Daily Mail Book of the Week

‘Marvellously decorated with characterful pen-and-ink drawings, Letters to Michael is testament to a bygone era when snow fell thick, real pennies were squirrelled in plum puddings and letter-writing sketched the true contours of a relationship.’ Telegraph Best Books of 2021

My father Charles Phillipson would have been amazed and delighted to learn that his series of letters to me, written when I was a small boy, were to be published. No such thought would have occurred...

Daily Mail Book of the Week | Letters to Michael

I keep returning to this magical collection, each time with renewed wonder that the letters survived — but also with a strange sadness that these days there is so little inclination to write any...

There is a poignant urgency underpinning Phillipson’s letters, his care to underline tricky spellings, his striving to imagine the world through his tiny son’s eyes.

Marvellously decorated with characterful pen-and-ink drawings, Letters to Michael is testament to a bygone era when snow fell thick, real pennies were squirrelled in plum puddings and letter-writing...

‘My dear Michael, Mummy and I are very pleased that you are now able to read books for yourself . . . As you grow older you will find that good books can be some of your best friends . . . Much...

A Telegraph Best Book of 2021 | Letters to Michael

We are absolutely delighted to report that copies of our recently published Special Release – Letters to Michael: a father writes to his son 1945–1947 – have been flying out of Foxed HQ to... 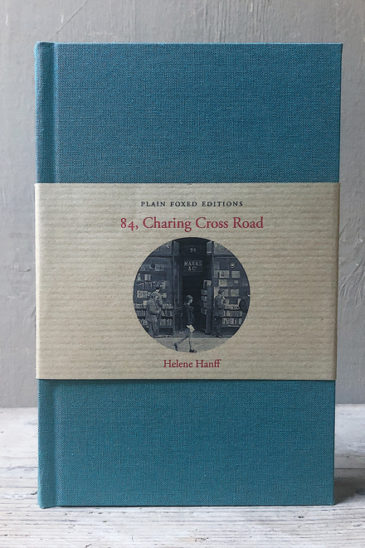 ‘Thank you very much for publishing Ronald Welch, Rosemary Sutcliff and BB sets. Your editions are a joy to handle and have given me many happy hours.’ W. Smith

Reading recommendations and present ideas are in plentiful supply at Slightly Foxed. Today we’re shining the spotlight on our Foxed Cubs series. These beautifully produced collectable children’s books strike a nostalgic chord with many older readers and introduce a younger generation to writers whose marvellous books have, unaccountably, been allowed to slip out of print. Bound in coloured cloth, with printed endpapers and original illustrations, the Cubs make ideal presents, as stand-alone titles or in sets. We have books, bundles and offers to satisfy all readers and occasions.

‘I love it! I intend to have some of the images framed as I did with the last calendar that I bought from you.’ S. Jackson

We’re delighted with the response to our latest calendar – a special celebratory one to mark our 70th issue earlier this year. We’ve just cracked open the last few boxes so if you’ve been thinking about ordering one, you might like to do so fairly soon. It would make a charming present for anyone who loves Slightly Foxed, or indeed for anyone who hasn’t yet come across the magazine. It’s a handsome, spiral-bound decorative wall calendar printed on sturdy paper with a board backing, and features some more of the seasonal Slightly Foxed covers that readers enjoy so much. We feel it will raise the spirits and look good in any room.