I first read Esther Waters more than fifty years ago, when I was an undergraduate at Trinity College, Dublin. As a young man I enjoyed reading tales of unmitigated woe, in which one disaster succeeds another, and the novel’s eponymous heroine suffers more than most at the hands of assorted drunkards, snobs, gamblers and predatory employers. And, as an Englishman in Ireland, I was fascinated by the complexity and ambiguity of relations between the two countries, and by Irish views of England ‒ of which Esther Waters is a remarkable and unusual example. In his dedication to the novel, George Moore referred to the fact that, as an Irishman, he had written ‘a book as characteristically English as Don Quixote is Spanish’, while James Joyce thought it ‘strange that it should have been left to an Irishman to write the best novel of modern English life’.

First published in 1894, Moore’s fifth novel is indeed remarkably English, both in its evocation of place and in its exact and lethal dissection of the English class system; but although Moore spent much of his life in England, only moving back to Ireland for some years to take part in the Irish literary revival and the foundation of the Abbey Theatre, he was Irish through and through. Born in 1852 and baptised a Catholic – he became a Protestant in middle age ‒ he was brought up in County Mayo, in the far west of Ireland. His father came from a landowning family, was for a time a nationalist MP, and owned a racing stable, the life of which Moore transplanted to Sussex in the opening chapters of Esther Waters, in which young Esther goes to work as a kitchen-maid at Woodview, on the downs behind Shoreham.

An unromantic figure, with drooping shoulders and a moustache to match – Yeats once described him as being ‘carved from a turnip, looking out of astonished eyes’ – Moore was sent to a Catholic school in Birmingham. He decided he wanted to be a painter, and spent some years in Paris, mixing with the Impressionists, but his career as an artist petered out, so he switched to literature instead. Manet introduced him to Emile Zola, whose unflinching realism he championed and sought to emulate, and nowhere more so than in Esther Waters.

Unable to read or write, the child of impoverished Plymouth Brethren, Esther Waters boasts a ‘sturdily built figure, yet graceful in its sturdiness’. Her face, we learn, is a blunt outline, and her

Jeremy Lewis, publisher, author and literary journalist, who was a great supporter of Slightly Foxed from the very beginning, died in April 2017. 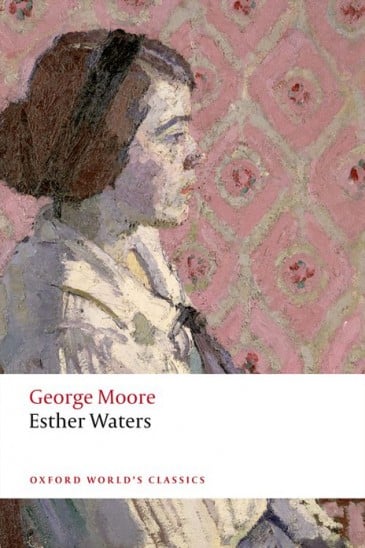 News came recently that sales of printed books have grown for the first time in four years while sales of ebooks have declined. ‘It would appear that there remains a special place in the consumer’s heart for the aesthetic pleasure that printed books can bring’ the chief executive of the Publishers’ Association is quoted as saying.