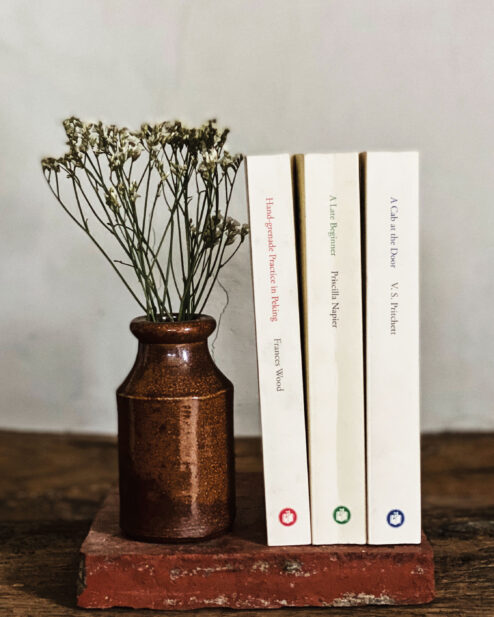 Our popular Slightly Foxed Paperbacks are perfect for slotting into a coat pocket or bag, and make charming presents. Delightful to look at, pocket-sized and elegantly produced on good cream paper, they give you a chance to acquire some of the original hardbacks you may have missed.

Now is your chance to catch up with a set of three of our available paperbacks. The set includes:

Priscilla Napier grew up in Egypt during the last golden years of the Edwardian Age. Here she brings to life that far-off world – the house and its devoted Egyptian servants, the desert picnics with Nanny, the visits to Cairo Zoo, the afternoons playing in the grounds of the Gezira Sporting Club – and the long summers in England among their mother’s family, as the First World War began to take its tragic toll of uncles and cousins. It is a wonderful evocation of a place, a time and a climate of mind – a book that, as Penelope Lively writes in her preface, ‘ranks quite simply with the greatest accounts of how it is to be a child’.

V. S. Pritchett, A Cab at the Door

The writer V. S. Pritchett’s mother was an irrepressible cockney, his father a reckless, over-optimistic peacock of a man, always embarking on new business ventures which inevitably crashed – hence the ‘cab at the door’ waiting to bear the family quietly away from yet another set of creditors. In this vigorous and original memoir Pritchett captures unforgettably the smells, sounds and voices of London in the first decades of the 20th century, and the cast of Dickensian characters among whom he grew up.

China in 1975 was a strange, undiscovered country, still half-mad from Mao’s Cultural Revolution, when young Frances Wood boarded a plane in London to study for a year in Peking. Virtually closed to outsiders for the preceding decade, China was just beginning to make tentative moves towards the outside world when Frances and her fellow students were driven through the dark silent countryside to their new quarters at the Foreign Languages Institute. Throughout the following year in an extraordinary Alice-in-Wonderland world where ‘education’ consisted of shovelling rubble, hand-grenade practice and cripplingly tedious ideological lectures, Frances never lost her sense of humour. Based on the letters she wrote home, Hand-grenade Practice in Peking is both affecting and hilarious.

Our popular Slightly Foxed Paperbacks are perfect for slotting into a coat pocket or bag, and make charming presents. Delightful to look at, pocket-sized and elegantly produced on good cream paper,...

Our popular Slightly Foxed Paperbacks are perfect for slotting into a coat pocket or bag, and make charming presents. Delightful to look at, pocket-sized and elegantly produced on good cream paper...

Avid to Live and Learn

Anne Boston on V. S. Pritchett, A Cab at the Door

I shall always be grateful to A Cab at the Door. I read most of it one Sunday evening in a Victoria line tube train which was stuck for two hours outside King’s Cross station. The train lights...

No one told me that the pyramids had been one of the seven wonders of the ancient world, but they were certainly the primal wonder of mine. From early on they exercised an oddly persistent...