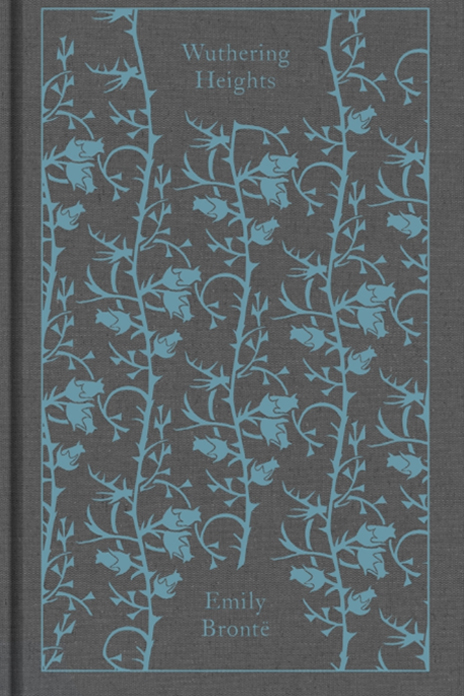 Part of Penguin’s beautiful hardback Clothbound Classics series, this delectable edition of Wuthering Heights by Emily Brontë is bound in high-quality colourful, tactile cloth with foil stamped into the design.

Emily Brontë is the greatest woman novelist of all time. That is my personal opinion, though it is one which happens to be shared by many others, including highly respected scholars. That in itself is a compelling reason for reading the one and only novel she ever completed. How far her second novel had progressed will never be known, for her sister Charlotte, who often took it upon herself to act for her sisters in the way she thought fit, probably destroyed the manuscript after Emily’s death.

Emily was born 200 years ago, in 1818. Wuthering Heights was published under the pseudonym of Ellis Bell nearly thirty years after her birth, in December 1847. It immediately excited some admiration for its originality, passion and power, but it also unleashed a barrage of abuse for its apparent brutality, its obsession with violence and vice, its immorality, savagery and disregard for civilized society. ‘Coarse and loathsome’ was the verdict of one critic. Another highly regarded man of letters, ironically admired by Charlotte, took it a step further: ‘Coarse even for men, coarse in language and coarse in conception.’ Though he could not have known it at the time, the irony was that Ellis Bell, who had written a novel too coarse even for men to read, was in fact the 29-year-old spinster daughter of a Yorkshire parson. Her life was circumscribed by religion, reading, the moors and the domestic routines of a remote parsonage in which she’d never have heard a coarse word, unless latterly from her drunken, drug-addicted and doomed brother Branwell, whose misery and dereliction may have contributed something to one or more of the male characters in the novel . . .

Emily Brontë is the greatest woman novelist of all time. That is my personal opinion, though it is one which happens to be shared by many others, including highly respected scholars. That in itself...