The said parcels contain copies of Terms & Conditions, Ysenda Maxtone Graham’s anecdotal history of life in English girls’ boarding schools between 1939 and 1979 (see p.13). As anyone who loved Ysenda’s Mr Tibbits’s Catholic School would expect, it’s a treat – reports from a lost tribe who remember with both horror and humour the days when the frozen hot-water bottle hadn’t yet given way to the comforting warmth of the duvet in boarding-school dormitories, and when the upper and middle classes tended to regard their daughters’ education as a handicap to marriage rather than an advantage in life. For anyone with a sense of humour, and particularly anyone with boarding-school memories of their own, it would make a marvellous present, especially – for anyone who hasn’t already read it – paired with our lovely new hardback Plain Foxed Edition of Mr Tibbits.

On the subject of presents, our first set of handsome personalized bookplates by the distinguished wood engraver Howard Phipps have gone down so well that we’ve added another set of engravings to the series. This time they feature exquisite representations of birds and animals by another of our favourite engravers, Sue Scullard. You’ll find more information in the enclosed catalogue, along with details of our cheerful Christmas cards, next year’s Slightly Foxed calendar and much more besides, as well as our traditional literary Christmas crossword.

In fact, for anyone who happens to be in London on Monday 5 December between 3 and 7.30 p.m. there’s an opportunity to see all the SF books and merchandise, stock up on Christmas presents, and meet the team at our first Slightly Foxed office ‘Open Afternoon’ in Hoxton Square, only a couple of minutes’ walk from Old Street tube station. Do drop in to raise a glass (or a restoring cup), have a chat and enjoy a mince pie.

During the autumn we received an unexpected visit. Vanessa Kramer from the Worshipful Company of Stationers arrived with news that the Company had chosen Slightly Foxed as the recipient of its 2017 Award for Excellence. Suitably impressed, we asked her to tell us more. The Stationers are one of those fascinating craft guilds founded in the City of London in the Middle Ages and still surviving today. Unfortunately there isn’t room here for their whole extraordinary story, but enough to say that the Company is still extremely active, engaged in charitable and educational work, and in upholding standards of quality and craftsmanship in their own particular field. ‘We chose Slightly Foxed Editions’, Vanessa told us, ‘because they embrace the best of print, binding and illustration, at an accessible price. Slightly Foxed stood out for the classic yet innovative and intimate approach they bring to reading, for both adults and children.’

Naturally we’re delighted and look forward to our association with the Company during the coming year and to visiting their beautiful hall near the Thames at Blackfriars. And of course we look forward to another year of our relationship with you, our warm and wonderful readers. We wish you the happiest possible Christmas and plenty of good books in the coming year. 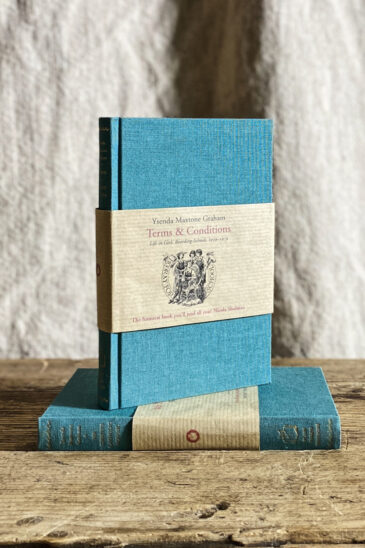