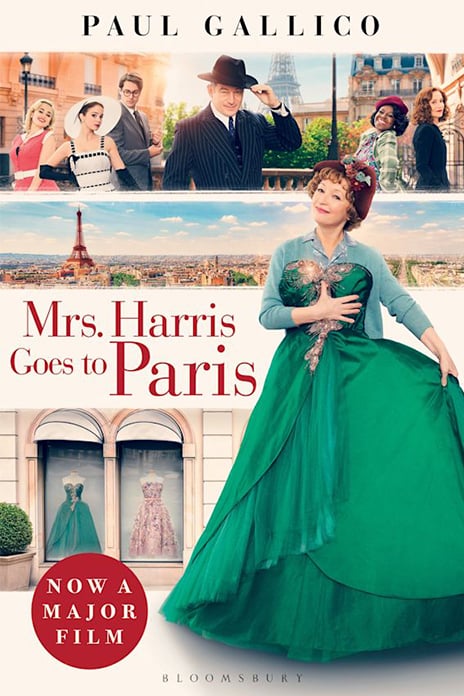 Mrs Harris is a salt-of-the-earth London charlady who cleans the houses of the rich. One day, when tidying Lady Dant’s wardrobe, she comes across the most beautiful thing she has ever seen in her life – a Dior dress. In all the years of her drab and humble existence, she’s never seen anything as magical as the dress before her and she’s never wanted anything as much before. Determined to make her dream come true, Mrs Harris scrimps, saves and slaves away until one day, after three long, uncomplaining years, she finally has enough money to go to Paris.

When she arrives at the House of Dior, Mrs Harris has little idea of how her life is about to be turned upside down and how many other lives she will transform forever. Always kind, always cheery and always winsome, the indomitable Mrs Harris takes Paris by storm and learns one of life’s greatest lessons along the way.

The Temptation of Mrs Harris

Mrs Ada Harris (or ‘Mrs ’Arris’, as she introduces herself: the American edition had the ghastly title Mrs ’Arris Goes to Paris) is a London char. Small and slender, with ‘apple-red cheeks, greying hair and shrewd, almost naughty little eyes’, she ‘does’ for clientele in Chelsea and Belgravia, moving from house to flat to mews, letting herself in with latchkeys on relentless, silent scenes of rumpled beds, dirty dishes, scummy baths. She works for 3 shillings an hour, 10 hours a day, 5 days a week, and half a day on Saturdays. She is widowed and lonely, but self-pity is not a part of her nature, and life has its perks. She has a friend, stout, dependable Mrs Violet Butterfield, with whom she enjoys evenings at the flicks, the pub, the music hall. And she satisfies a craving for beauty and colour by filling her tiny Council flat at 5, Willis Gardens, Battersea, with potted plants, chiefly geraniums. Flowers provide her with ‘an escape from the sombre stone desert’ in which she lives . . .


The Temptation of Mrs Harris

It was astonishing to me that a grown-up could cry, and more than astonishing that anyone should cry for joy. The memory came back to me a few weeks ago, as I reread, with my 9-year-old daughter,...