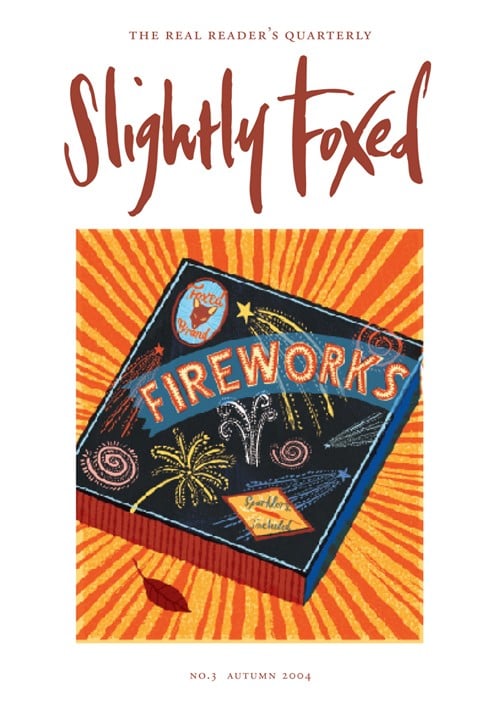 Douglas Botting, The Saga of Ring of Bright Water

Landscape and the Heart • ANNE BOSTON

On the works of Lesley Blanch

V. S. Naipaul, Among the Believers: An Islamic Journey

Wyndham Lewis, The Revenge for Love

Janina David, A Square of Sky

Revelling with Ruskin • DERWENT MAY

The Salesman Only Rings Once • PAUL WILLETTS

Julian Maclaren-Ross, Of Love and Hunger

Ann Schlee, The Time in Aderra

Indexing on the Mekong • JULIA KEAY


Slightly Foxed Issue 3: From the Editors

Since Slightly Foxed was launched, its office has been comfortably sited in Canonbury, a quiet part of North London with leafy roads and literary associations: George Orwell, Evelyn Waugh, Louis...

Ariane Bankes on Douglas Botting, The Saga of Ring of Bright Water

Some books arrive out of the blue and virtually save one’s life, and Douglas Botting’s biography of Gavin Maxwell was one such book for me. I was lying in my hospital bed after an unscheduled...

My favourite Russian writer-doctor is not Anton Chekhov but Mikhail Bulgakov, who describes with aching clarity the slow and at times humiliating road to acquiring what London taxi-drivers call...

Recently I was given a copy of The Music at Long Verney: Twenty Stories by Sylvia Townsend Warner. It was a revelation. Years ago, when I was a struggling art student, I read and loved her novels,...

Garden-writing is always either grimly concerned with the nuts and bolts of gardening’s practicalities or with its latest and flashiest fashions. The first kind is written by mere doers, the second...

I once met a girl who was writing a thesis on Conrad. Her opinion of Nostromo was nothing if not passionate. ‘It’s like Conrad means to bore you to death,’ she recommended. ‘You must read...

As well as being a rattling good read, Sabine Baring-Gould’s bloodstained historical romance Cheap Jack Zita is full of coincidences that make me feel rather possessive about it. It’s set in Ely...

Landscape and the Heart

Anne Boston on the works of Lesley Blanch

‘Her whole life was spent riding at breakneck speed towards the wilder shores of love.’ Lesley Blanch’s memorable description of Jane Digby el Mezrab supplied the title of her first book and...

Holding the Pass to Paradise

Christian Tyler on V. S. Naipaul, Among the Believers: An Islamic Journey

Published in 1981, Among the Believers is the account of a journey through Iran, Pakistan, Malaysia and Indonesia in 1979, shortly after the Iranian revolution. Its subject, the Muslim fundamentalist...

Imam with a Mission

Rifa‘a al-Tahtawi has the strange distinction of being the only nineteenth-century Egyptian writer with his very own website. I first heard about him in a lecture by the French journalist and...

No book has exposed my own double standard to me more clearly than Dancer by Colum McCann. A fictional portrait of Rudolf Nureyev, told from many angles in many different voices, it opens with one of...

In Issue 1, I described the tradition in Chinese books of placing an illustration above a solid block of text on each page, a tradition that I set out to revive in my Chinese cookery manual.

Trevor Fishlock on Joshua Slocum, Sailing Alone Around the World

It is laconic and simple, non-romantic in that Slocum refuses to be a lone hero struggling against the terrifying sea. Rather, he is at home in the ocean wilderness, insisting that ‘the wonderful...

Francis King on Wyndham Lewis, The Revenge for Love

Once met, I rarely dislike a person. But the idea of a person often fills me with dislike and even abhorrence. So it was with Wyndham Lewis. I never met him but I might easily have done so, since I...

At the top of some concrete stairs, in a slightly run-down area of London near Sadler’s Wells, is a room with a magic carpet, otherwise known as Eland Books. Open an Eland book and you are...

Jeremy Lewis on Janina David, A Square of Sky

Rereading the books of one’s youth is always a hazardous business, since a magic once lost can never be regained, so I contemplated a fresh assault on A Square of Sky with pleasure tinged with...

Derwent May on John Ruskin, Praeterita

John Ruskin’s Praeterita is one of the most exhilarating books I know, and I often go back to it. For most of his life the great art-critic-cum-sage was writing books to educate people. Once, when...

The Salesman Only Rings Once

Paul Willetts on Julian Maclaren-Ross, Of Love and Hunger

I hunted for his books as well as for the miscellanies and magazines that featured his work. Though his entertaining, much-quoted Memoirs of the Forties soon reappeared in paperback, the rest of his...

It is 8 a.m. on a September Sunday in New Delhi. The garden below is still fresh and green before the heat of the day, and pigeons bill and coo on the air-conditioning unit outside the bedroom...

Indexing on the Mekong

I guess (but I don’t know, since it’s not often a hot topic of conversation) that every amateur indexer has his or her own way of working. Since our joint IT expertise would shame most...

Jane Gardam on Ann Schlee, The Time in Aderra

It seems amazing that Ann Schlee’s work is not known to everyone, because she has always had her following and is still writing, but her four big novels written between the 1970s and 1996 are now...