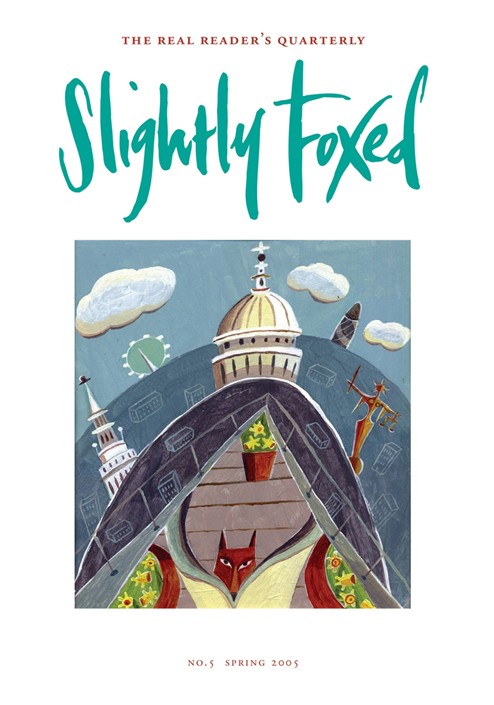 Jeremy Lewis gets lit up by Simon Gray’s Smoking Diaries • Lucy Lethbridge hears A Voice through a Cloud • Ranjit Bolt is moved to rhyme by Byron’s Don Juan • Adèle Geras takes a walk down Revolutionary Road • Juliet Gardiner tracks the extraordinary history of the tank • John de Falbe discovers the story of an exiled Russian princess • Ariane Bankes travels to York to meet a very unusual bookseller • Ursula Buchan digs in with Vita Sackville-West • Miles Hordern drops anchor off a remote Melanesian island • Sue Gee pays her respects to a tortoise called Archimedes, and much more besides . . .

Patrick Wright, Tank: The Progress of a Monstrous War Machine

Memoirs of the Comtesse de Boigne

Raymond Firth, We the Tikopia

The View from Denestornya • RUTH PAVEY

Miklos Banffy, The Writing on the Wall: The Transylvanian Trilogy

Denton Welch, A Voice through A Cloud

Made in Siberia • JOHN DE FALBE

Christine Sutherland, The Princess of Siberia

A Word in Your Ear • JONATHAN JAMES-MOORE

A Past Relived • SUE BRIDGWATER

Slightly Foxed’s Book Hound runs to earth a selection of interesting fiction which may well have lost behind the piles of bestsellers.

The Tortoise and the Writer • SUE GEE

In memory of Archimedes

Reading the opening chapter, I was immediately sucked into a magical world. The hare’s behaviour confounds science: it may move in a great drove like deer; it sucks milk from cows at pasture; it...

I am wretchedly ill-qualified to write about Simon Gray, since I am hopeless about going to the theatre and have never seen one of his plays. I plan to remedy matters as soon as I can, but in the...

Juliet Gardiner on Patrick Wright, Tank: The Progress of a Monstrous War Machine

The tank is an emblem of state power, a behemoth that has transformed wars and threatened – and sometimes mown down – civilians. But it has also been seen as a ‘cubist slug’, has inspired a...

Each time I read Reef – the story of a boy, Triton, growing up as a servant and cook in Sri Lanka in the late 1960s – I find something new. I think the way that The Tempest flits in and out of...

In George Ramsden’s quiet secondhand bookshop, Stone Trough Books, in York, he normally has a publishing job on the go as well. Editing (letters of Siegfried Sassoon at the moment) and book-design...

Ever since he drew my attention some years ago to the best book I’ve read in the last decade – Time Will Darken It by William Maxwell – I have trusted Nicholas Lezard’s judgement. And if I...

Roger Hudson on Memoirs of the Comtesse de Boigne

Outbursts of memoir-writing by women followed both the English Civil Wars and the years 1789 to 1830 in France, the period encompassing the Revolution, Napoleon, the Restoration and the July...

That a romantic could have also been So classical is striking you’ll agree Though waxing passionate when we are green And cooler when mature is probably A change determined in the very gene Or...

Miles Hordern on Raymond Firth, We the Tikopia

Tikopia lies 1,500 miles east of Australia in that part of the Pacific known as Melanesia. But culturally Tikopia’s population is Polynesian. For reasons that are not entirely clear the Tikopia...

Ruth Pavey on Miklos Banffy, The Writing on the Wall: The Transylvanian Trilogy

Count Miklos Banffy’s Transylvanian Trilogy is a long novel about the follies, beauties and shortcomings of Hungarian society in the decade leading up to the First World War. He wrote it during the...

John De Falbe on Christine Sutherland, The Princess of Siberia

Every season a couple of wonderful biographies emerge whose reviews and sales might lead one to believe that they will stay bestsellers for ever. A year or two later they are in no greater demand...

A Word in Your Ear

I am, literally, a bad reader. I have mild dyslexia and well remember, when reading Peyton Place in my youth, taking ‘sonofabitch’ as ‘sofabitch’ and thinking it was a piece of bordello...

Recently, I noticed a rather irritating poster on the Underground proclaiming: ‘You never forget your first time.’ It was an advertisement for a villa holiday company – bizarrely – but the...

The ups and downs of literary reputations are often slightly mysterious. I still find it strange, though, that although we pay ample homage to most of the heavyweights of the nineteenth century, one...

I first read Alison Uttley’s The Country Child over thirty years ago, when I was already in my twenties. I have always remembered it fondly, for it described a way of life that did not then seem so...

The Tortoise and the Writer

Sue Gee, in memory of Archimedes

The day before she died she was clambering over a pile of books on the floor of my study: novels used for teaching, reference books for the novel I was writing. She wasn’t used to being there. She...