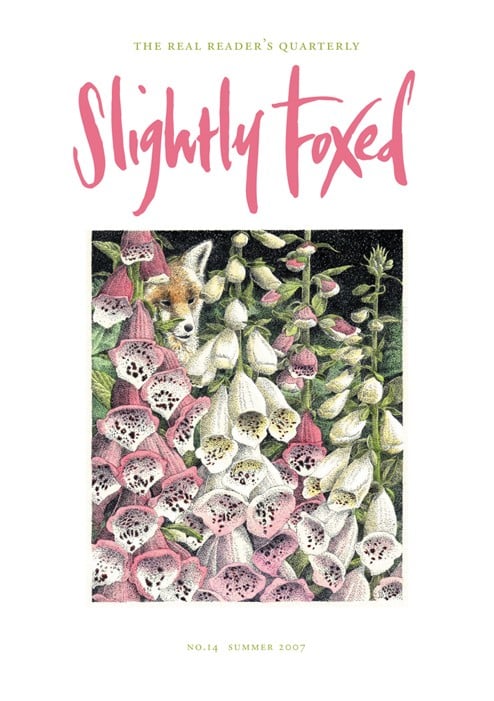 Fellow-Travellers, or The Trouble a Book Can Cause • LYALL WATSON

Michael Andrews, The Life that Lives on Man

A Rum Do • LINDA LEATHERBARROW

The Pencil and the Plough • CHRISTIAN TYLER

Sheila Stewart, Lifting the Latch: A Life on the Land

On the Broad Shoulders of a Eunuch Cat • SUE GEE

Edward Young, One of Our Submarines

Robert Louis Stevenson, Travels with a Donkey in the Cévennes

On the Ladybird Books


Slightly Foxed Issue 14: From the Editors

No doubt you’ve noticed, as we have, how smartly the press has jumped on to the ecological bandwagon. Over the past twelve months we’ve received special ‘green’ issues of various magazines,...

One afternoon last summer I splashed along Piccadilly with the rain spray-painting the back of my tights, thinking how much nicer Paris in the sunshine would be. And then, from nowhere, a neglected...

I’ve never been to Brazil, and to tell the truth I’m not much interested in going. Even reading about South America doesn’t thrill me. I’m not sure why this should be since I found Central...

Fellow-Travellers, or The Trouble a Book Can Cause

Lyall Watson on Michael Andrews, The Life that Lives on Man

Florence Nightingale steadfastly refused to believe in bacteria, but she was wrong. The horrid truth is that every one of us carries billions of fellow-travellers, and no amount of bathing can ever...

John Saumarez Smith on the Oxford Dictionary of Quotations

On page 1 he noted the omission of Lord Acton (‘power corrupts etc’) and ten pages later he criticized the sparseness of John Aubrey’s entry, which might be explained by the absence of Brief...

Mountaineers can obviously take a joke. In 1981, four years before W. E. Bowman died and a quarter of a century after the publication of his spoof mountaineering book, The Ascent of Rum Doodle, he...

The Pencil and the Plough

Wendell Berry is a man who refuses to be categorized, because every label attached to him is a distortion of his views. Or so he feels. This lean and lanky, six-foot-something Kentucky farmer is...

Dennis Silk on Sheila Stewart, Lifting the Latch: A Life on the Land

It all began in a butcher’s shop in Shipston-on-Stour. In 2000 Sheila Stewart had written an excellent little book about her old daily help, Country Kate, to record for posterity ‘the richness of...

On the Broad Shoulders of a Eunuch Cat

In 1917, Kathleen Hale arrived in London, fresh out of art school, ‘with only a few shillings in my pocket, my pince-nez delicately chained to one ear and no qualifications whatsoever for earning a...

Contemplating diving into Rebecca West’s great Balkan travel adventure, Black Lamb and Grey Falcon, is like contemplating a long bungee jump. It offers both compulsion and revulsion, but once it is...

Jim Ring on Edward Young, One of Our Submarines

The man from the Nuclear Installations Inspectorate was very insistent. On the bucking deck of the tender in Plymouth Sound he engaged me in conversation so closely as to quite obscure my view. She...

Hilary Macaskill on Robert Louis Stevenson, Travels with a Donkey in the Cévennes

Travels with a Donkey in the Cévennes, Robert Louis Stevenson’s account of his walk through the mountains in 1878, was my mother’s favourite book, which automatically made it one of mine. The...

Flight of the Ladybird

Quick: bring something to read to him on the train! This last-minute thought, just before setting the burglar alarm, sends me rushing to the pair of small bookshelves outside the bathroom which...

I’ve never had anything you could call A Career. I’ve always either gone where interest suggested and opportunity allowed or just Micawberishly waited for something to turn up. Despite the...

For fifteen years, I had one of the best jobs in the world. I was book news editor at The Bookseller, and most weeks I included in my pages an interview with an author. I talked to celebrated...