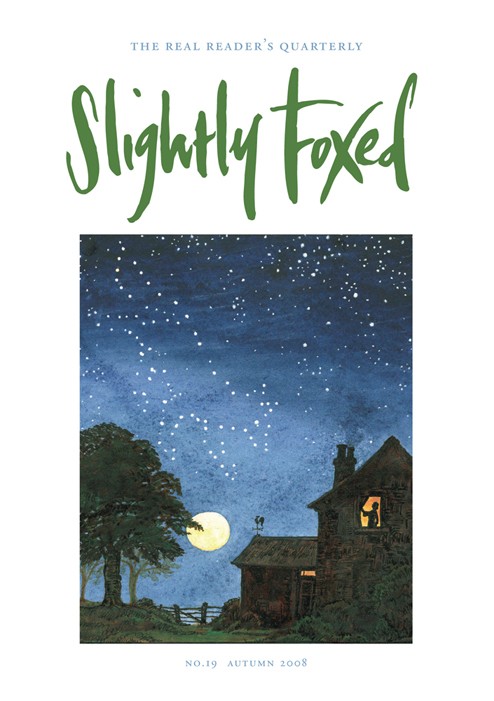 The writings of John Stewart Collis

The Eyesight of Wasps • GRANT MCINTYRE

V. S. Pritchett, A Cab at the Door

On walking in London with with Dickens

Lord Moran, The Anatomy of Courage

William Faulkner, As I Lay Dying; The Sound and the Fury

Inside the Aunt Heap • TIM HEALD

Robin Eakin, Aunts up the Cross

An Eagle in the Attic • JEFF NICOLL

On the letters of Raymond Chandler

On the life and writings of George Millar

The Making of a Writer • RUTH SYMES

Dodie Smith, I Capture the Castle


Slightly Foxed Issue 19: From the Editors

For some months now, at our regular get-togethers, the five of us have been sitting round the table, chewing our pens and agonizing over the question: Is it time to put the price of Slightly Foxed...

Avid to Live and Learn

Anne Boston on V. S. Pritchett, A Cab at the Door

I shall always be grateful to A Cab at the Door. I read most of it one Sunday evening in a Victoria line tube train which was stuck for two hours outside King’s Cross station. The train lights...

Richard Ingrams on the writings of John Stewart Collis

John Stewart Collis hated to be referred to as ‘a neglected writer’. He said that if people read that a writer is neglected their natural response is to say, ‘Well, let’s neglect him some...

The Eyesight of Wasps

I discovered Niko Tinbergen’s Curious Naturalists as a student. I was reading psychology and the course had just begun with a look at animal behaviour, which involved a grasp of scientific method...

Oliver Pritchett on walking in London with with Dickens

When I was a child in the late 1940s and early 1950s I believed that my father was a close personal friend of Charles Dickens. They must, I thought, have met at various inns in London and shared...

The Man from Department K

I might never have discovered James Munro’s John Craig thrillers had I not seen the film of the last of them, The Innocent Bystanders, in early 1973. Christina Foyle remarked at the time of...

Christopher Robbins on Lord Moran, The Anatomy of Courage

One day early in the First World War, an inexperienced young doctor serving with the Royal Fusiliers examined a sergeant who was ‘out of sorts’. The man had a reputation for being imperturbable...

Josie Barnard on William Faulkner, As I Lay Dying; The Sound and the Fury

When I sat down to start this piece, I nearly got tangled up in theory. William Faulkner was so brilliantly experimental with form, and consequently captured the interests of literary critics over...

Inside the Aunt Heap

Tim Heald on Robin Eakin, Aunts Up The Cross

Aunts up the Cross begins and ends with the death of the author’s great-aunt Juliet, aged 85 and frankly pretty eccentric if not down-right mad. She was run over by a bus which was travelling...

An Eagle in the Attic

The epigraph to Querencia, by my friend Stephen Bodio, explains that the title is a term taken from the bullring, denoting the imagined, and illusory, sanctuary sought by a bull entering the ring,...

Noel Streatfeild’s children’s classic Ballet Shoes, published in 1936, remains a favourite for anybody interested in theatre. Whenever one mentions a first-class book of this kind, if the adult...

John Sheppard on the letters of Raymond Chandler

I don’t know about you, but I have a number of books on the go at any one time. There’s one in the downstairs loo, one in the bathroom, a couple by my armchair in the living-room, and two or...

Paul Atterbury on the life and writings of George Millar

At various times in my life, from my twenties to my fifties, I planned to travel through France by boat. As real life gradually rendered the achievement of this ambition ever more unlikely, I took to...

Sometimes, confessing to a favourite book can bring a flush of embarrassment to the cheeks. We tend to make such selections at a susceptible age and they don’t necessarily stand up to the test of...

Birds of America is supposed to be Mary McCarthy’s weakest novel, though it was her own favourite. Yet it is a fine book – a brilliant study of a clever, odd teenager growing into a man. And like...

The Making of a Writer

Ruth Symes on Dodie Smith, I Capture the Castle

Something half-remembered involving a writer locked in a tower, and a conviction that my first encounter – literary or otherwise – with the drink crème de menthe took place within its pages:...

A Cab at the Door