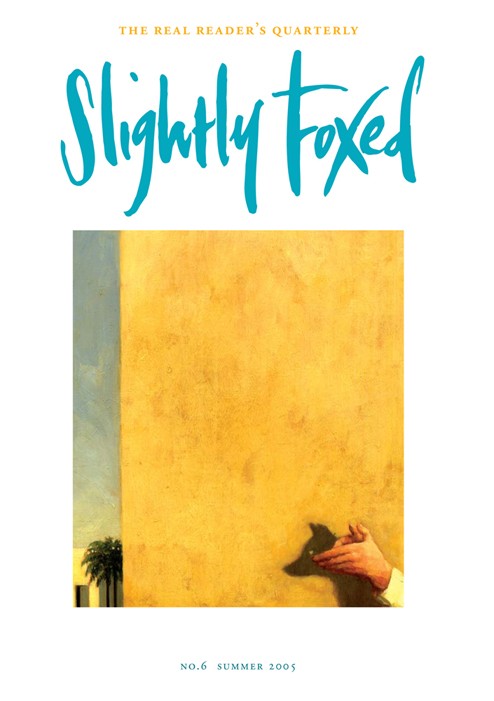 After the Death of the Masters • BARNABY ROGERSON

On the novels of Stefan Zweig

On the Loose • MARY FLANAGAN

The Pick of the Pocket Editions • JOHN SAUMAREZ SMITH

On the novels of Theodor Storm

On the Poetry Review


Slightly Foxed Issue 6: From the Editors

It’s a hopeful time of year. The stalwart London plane trees have unfurled their leaves, and the sun is rising higher behind the City domes, towers and spires that we can see from our now...

The notion of a long swim through Britain began in the pouring rain while Roger Deakin was swimming in his moat in Suffolk. The idea became an obsession and, inspired by John Cheever’s short story...

After the Death of the Masters

Last summer the two masters of travel writing, Norman Lewis and Wilfrid Thesiger, died within a month of each other. As Britain buried the last of her explorers and the best of her travel writers, it...

I can’t remember the moment when I decided to allow Biggles some space in my new novel, but I imagine he just turned up one day, demanding attention. An ingrained loyalty to past escapism meant...

It is peculiarly exciting to turn a page and find a strong personal emotion exactly distilled – an emotion hitherto believed to be one’s private idiosyncrasy. Around the age of 13 most bookish...

Malcolm Gluck on the novels of Stefan Zweig

The one thing that five of the six Stefan Zweig books currently in print in Britain have most strikingly in common is not the author’s consistency of style but his photograph opposite the title...

A Positive View of Parasites

A parasite is often to be admired for its ingenuity and persistence, even if it isn’t always attractive. A friend of mine once discovered a worm in his bed. It had come from his own body and had...

To compensate for this structural flaw, I went to Athens and had the adventure I wanted to have. Then I nipped back to Rome, found a seedy pensione and holed up there until he arrived. For two days I...

Peter Oborne on C. L. R. James, Beyond a Boundary

Only one masterpiece has ever been written about the game: Beyond a Boundary, by the intellectual and political agitator C. L. R. James. It is a book that transcends all other books on the subject in...

Colin Martin on Gaylord Schanilec,Mayflies of the Drifted Region

Given that we’re talking in years, it is ironic that the book that stimulated this article deals with the most ephemeral entomological order, poetically described by Louis MacNeice as ‘One only...

I am next to a businessman at a formal dinner. The conversation dries up after the soup. At a loss, I ask what sort of books he enjoys. Risky, I know. Either he won’t read, ‘except on planes when...

I have always been interested in translations, for they can affect one nation’s view of another. Thanks to Charles Dickens, Sherlock Holmes and a weepy film called Waterloo Road, for most...

Scrolling idly through the SOAS Library’s subject catalogue, I must have brushed an unusual combination of keys, so activating a random function not mentioned on the options bar nor widely known to...

The Pick of the Pocket Editions

For those like me who look out for, and sometimes even retain, useless knowledge, the first World’s Classic, published in 1901, was Jane Eyre; the last in the original pre-paperback series,...

Nicholas Bagnall on the novels of Theodor Storm

I first discovered Theodor Storm about eight years ago when someone sent me a copy of The Dykemaster in an excellent translation by Denis Jackson. I say excellent, not because of its truth to the...

A Little Bush Maid began as a serial, from newspaper articles which Minnie (as she was christened) Grant Bruce – a jobbing journalist in Melbourne – had contributed to the children’s page she...

Derek Parker on the Poetry Review

Suddenly, out of the blue, one morning in December 1965, a letter arrived on the delightfully old-fashioned headed notepaper of the Poetry Society (‘Patron, Sir Compton Mackenzie, LL.D., F.R.S.L.,...