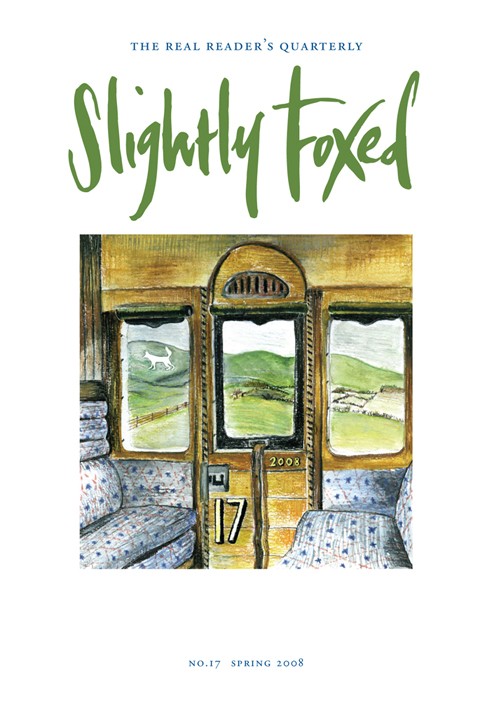 The Truth of the Heart • HAZEL WOOD

Radek Sikorski, The Polish House: An Intimate History of Poland

Islands of the Mind • CHRISTOPHER RUSH

Not Getting on with Aunts • ROHAN CANDAPPA

On the short stories of Saki

Going up in Smoke • SIMON HEAFIELD

Benoît Duteurtre, The Little Girl and the Cigarette

On the poetry of Billy Collins

One Foot in Eden • MAGGIE FERGUSSON

On the writing of memoirs


Slightly Foxed Issue 17: From the Editors

Well, Spring again, and with it the start of a fresh venture. As we mentioned in the last issue, for some time now we’ve been becoming increasingly aware of the number of excellent books that have...

When my old friend the artist John Nash died I inherited his books. I imagined him reading them by lamplight, just as I read when I was a boy, the twin wicks faintly waving inside the Swan glass...

The Truth of the Heart

J. C. T. Jennings and the Problem of Evil

My first parting of ways came fifty years ago, when I was 8. In September 1957 I was to be sent away to prep school. I could hardly wait. A brand-new brown trunk, inscribed with my name and school...

Sue Gee on Radek Sikorski, The Polish House: An Intimate History of Poland

Islands of the Mind

I was not aware when I read Treasure Island of the affinities between its famous author and my obscure self: Calvinism, a hellfire-breathing female, a father problem, a terrorized mind and a fevered...

Not Getting on with Aunts

Rohan Candappa on the short stories of Saki

Second-hand copies of The Penguin Complete Saki can be bought on Amazon for a very reasonable £5.60. The book contains 135 short stories, 3 novels and 3 plays. There’s also a foreword by Noël...

Annabel Walker on Sir Nikolaus Pevsner, The Buildings of England

The forty-six volumes in Sir Nikolaus Pevsner’s Buildings of England series were originally intended as guides you could slip into your pocket. I don’t think I’ve ever actually carried one...

Going up in Smoke

Simon Heafield on Benoît Duteurtre, The Little Girl and the Cigarette

The dogmatic persecution of those whose unhealthy lifestyle falls below the high standards of the lawmakers is vividly and terrifyingly dramatized in Benoît Duteurtre’s novel The Little Girl and...

Derek Robinson on the poetry of Billy Collins

For years, then, I skipped modern poetry – until I discovered Billy Collins. Cue thunder and lightning! Now I’d walk backwards across town in a blizzard to buy the latest book of Billy...

One Foot in Eden

Writing her diary one evening in January 1951, Edwin Muir’s wife Willa reflected that her husband’s poems would live on, but ‘of himself, only a legend’. Why? Contemporary poets united in...

The Spyglass of Tranquil Recollection

There are books which sit on our bookshelves for years, getting slightly more foxed as time passes. My Dubliners has followed me to five different addresses and, although a rather flimsy paperback...

Patrick Coldstream on the writing of memoirs

About a year ago now a smiling vanman delivered twenty-six heavy brown-papered packages from a trolley and stacked them along the side of the hall. I scrabbled one parcel open and there they were:...