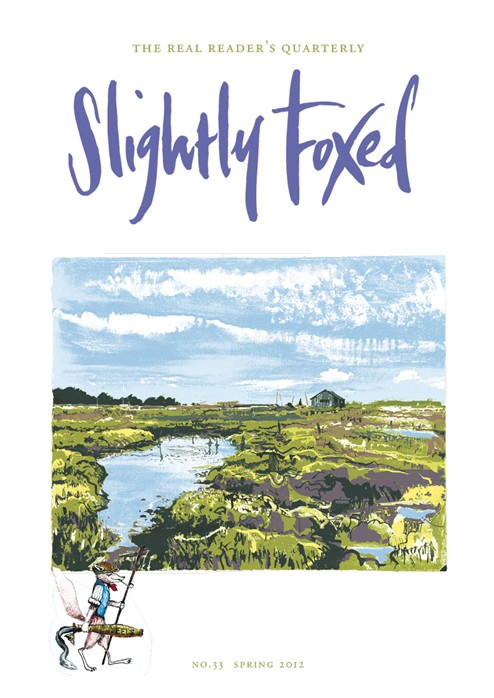 In Praise of Pratchett • AMANDA THEUNISSEN

On the works of Richard Cobb

How Did He Do It? • RANJIT BOLT

On the works of Philip Larkin

On the works of John Cowper Powys

Much More than a Perfect Gent • URSULA BUCHAN

E. A. Bowles, My Garden in Spring

The Making of Flashman • PATRICK MERCER

A Tourist in Search of Home • DAVID BARNES

On the etiquette of book borrowing

Brewer’s Dictionary of Phrase and Fable

All They Had Was Hank • COLIN DUNNE

On the novels of Hank Janson


Slightly Foxed Issue 33: From the Editors

Now the year has turned and spring bulbs are bravely poking up in Clerkenwell window-boxes, we’re looking forward hopefully, as well as looking back thoughtfully over the events of the past year,...

Today’s woodcut first appeared on the contents page of Slightly Foxed Issue 33 in Spring 2012. Rosalind Bliss is a landscape artist based in the UK. She learned the rudiments of wood engraving from...

Oliver Pritchett on the etiquette of Book borrowing

Every year the registrar of Public Lending Right issues a report on the authors whose books have been most often borrowed from libraries. You can be sure these days that Danielle Steel, Josephine Cox...

How Did He Do It?

Ranjit Bolt on the works of Philip Larkin

I came to them, the second time, quite late, It was the day The letters, full of snobbery and race hate That caused the chattering classes such dismay Came out, and Terry Eagleton had...

A World of Shining Beauty

My small Welsh primary school lay at the end of Boundary Lane, on the Flintshire-Cheshire border. It was a good 20 miles from any beach. Nevertheless, the first thing I remember having to learn was...

All Creatures Great and Small

In the early days of Slightly Foxed, in our very first issue in fact, I wrote about a book that had once come my way in the course of my work as a publisher’s editor – a book that had entranced...

In Praise of Pratchett

Death turns up a lot in Terry Pratchett’s books. He’s one of his most popular characters, a seven-foot-high skeleton with burning blue eyes who speaks in CAPITALS. He is as terrifying as one...

Grant McIntyre on the works of Richard Cobb

Richard Cobb was a history don at Balliol, eccentric in a college where oddness is almost routine. He was small and thin, not very prepossessing. Jeremy Lewis, his editor at Chatto & Windus,...

John Gray on the works of John Cowper Powys

It is hard to know what has made me a lifelong reader of John Cowper Powys, but perhaps the fact that he was one of three very different brothers who shared a common impulse may be part of the...

Much More than a Perfect Gent

Ursula Buchan on E. A. Bowles, My Garden in Spring

I cannot think of many garden writers from a century ago in whose company I would have felt entirely comfortable. William Robinson would have ignored me, Gertrude Jekyll seen through me, and Reginald...

‘Flashman is back,’ declared the Labour leader Ed Miliband at Prime Minister’s Questions on 11 May 2011. He was referring to David Cameron and he presumably meant to imply that the Tory was a...

The Making of Flashman

I was brought up on a diet of George MacDonald Fraser’s anti-hero Flashman as he roistered and rogered his way around the Empire, and I reread many of the books while serving in Northern Ireland....

When my sister was 10 she bought a rather battered copy of a book called Marianne Dreams at our school summer fair. A few years later, when she decided it was too young for her, she handed it on to...

A Plug for Dr Brewer

A. F. Harrold on Brewer’s Dictionary of Phrase and Fable

Dr Brewer’s Dictionary (1870) is a uniquely curious lucky dip of a book – part anthology of proverbs, part almanac, part Classical dictionary, part trivia. The man in the street who hadn’t the...

A picture in our little house and a book excited me. There was a coloured print of Sir Walter Raleigh in Elizabethan hose and doublet, sword and feathered hat, explaining his faraway adventures to...

Rereading ‘The End of General Gordon’, the fourth of Lytton Strachey’s portraits in Eminent Victorians (1918), is an awful reminder of our failure to learn from history. Gordon’s and...

On my bookshelves are several well-thumbed copies of Good-bye Mr Chips. One is a first edition with a delightful jacket illustration by Bip Pares of Mr Chips asleep in an armchair. Another is a film...

All They Had Was Hank

Colin Dunne on the novels of Hank Janson

Try it yourself. Assemble a handful of chaps of pensionable age – because these will be men whose voices were wavering between treble and tenor in the 1950s – and ask them if they remember the...